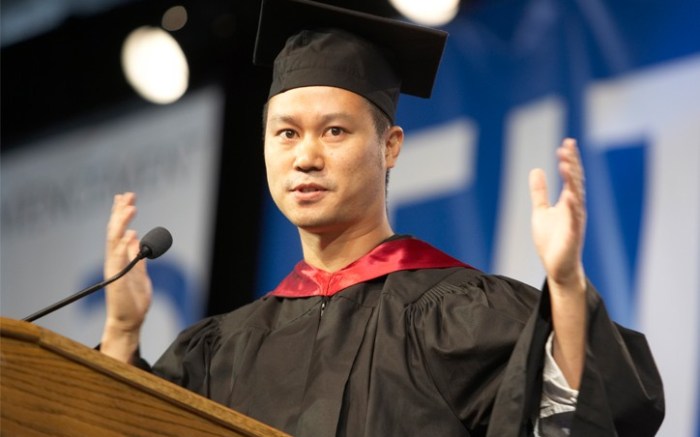 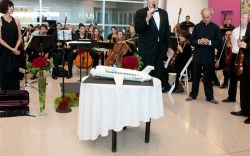 Notorious F.I.T.
Tony Hsieh has a unique way of inspiring young minds. As commencement speaker at the Fashion Institute of Technology’s ceremony in New York this week, the Zappos CEO borrowed a line from the Biggie Smalls biopic “Notorious.” “Don’t chase the paper, chase the dream,” he recited, which drew cheers from the 800-plus students. Accessory-design undergrads next fall may also have something to look forward to. Designer Ruthie Davis is turning professor, teaching a senior-level course in non-traditional footwear. “I really enjoy being a mentor, so hopefully I can pass something along from all of my years in the business,” Davis said. FIT accessories design department chair Vasilios Christofilakos said Davis is a perfect fit. “It’s so up her alley because she’s the queen of the non-traditional,” Christofilakos said. “She’s always thinking of innovative ways of how to build a shoe. I’m excited.”

Keeping Busy
Just because Donald Pliner has sold off the majority stake of his namesake brand, doesn’t mean he has plans to step out of the spotlight. In fact, the Miami-based designer has been making very public appearances as the creative force behind his Donald J. Pliner line, most notably on CNN Español recently. On air — with the family dog and mascot, Babydoll, perched on his lap — Pliner chatted about his time in the biz. “The Latin market is huge,” he said, noting he’s seen Latin American women come into his Miami store and buy up to seven pairs of shoes at once. “You have to open your backyard and see what’s out there. I want to take advantage of that.” But he isn’t just focusing on TV. Days after filming the segment, Pliner, wife Lisa and daughter Starr, joined the Miami Symphony Orchestra, which was outfitted in DJP for a live performance at the city’s international airport. Part of the Music in Unsuspected Places concert series, the Pliners worked with friend and symphony conductor Eduardo Martuert to pick four styles — two men’s and two women’s — for the musicians. “It’s a wonderful marriage,” said Pliner, noting he hopes to work with the orchestra on future projects. As if that isn’t enough, Pliner’s attention is also on real estate these days. His 16,000-sq.-ft. home on Miami’s exclusive Star Island has hit the market. The price tag? A whopping $24 million.