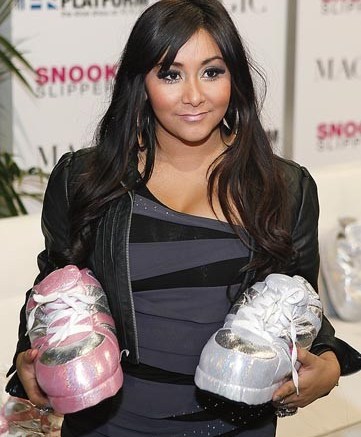 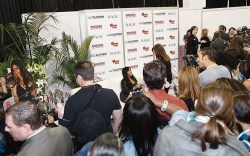 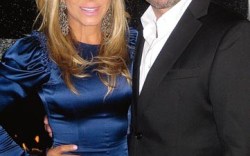 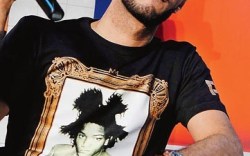 Crowd Control
Nicole “Snooki” Polizzi sure can create a situation. Hundreds of fans and curious onlookers rushed the FN Platform Café in hopes of snapping a photo or getting some face time with the “Jersey Shore” breakout star. “I love her,” said Central Washington University student Caitlin Witham, who was attending the show on a class trip and pushed her way through the crowd to meet Polizzi. “I dressed up as her for Halloween. I filled my bra with water balloons and carried around a pickle.” With fans like these, Polizzi could find success for her Snooki Slippers with Louisville, Ky.-based Happy Feet. “I’d definitely wear them out,” Witham said. “I’d probably do, like, a little cocktail dress and rock the slippers with it.” But it wasn’t only a slipper fest. Though Polizzi admitted to having “no idea” such large shoe shows are an industry norm, she’d consider branching beyond slippers. “That would be awesome,” she said. “I’d love to have a bedazzled heel.” The pint-size star, who cited Nina’s light-up heels as a fave, knows what she wants — or so she thinks. Sources told Insider the reality-TV queen had a chance to chat with some footwear kings — like Steve Madden, among others — but declined, instead asking to meet non-existent shoe designer “Mr. Nina.”

Out of the House
Lights, camera, action. When footwear execs arrived at the Hugh Hefner suite at the Palms Resort & Casino for a private cocktail party, Adrienne Maloof was filming once again. But attendees, including Modern Vintage’s Rick Cytrynbaum, Titan’s Joe Ouaknine and Pentland’s Sonny Shar, quickly found out that the “Real Housewives of Beverly Hills” star isn’t just about entertainment. While her family has serious business cred for their ventures, including the Palms and the Sacramento Kings, Maloof (who was filming for a project unrelated to Bravo) has also set her sights on making it in the shoe biz. “[Being on the show] is interesting and fun, but it’s mostly about business,” said Maloof, who has been taking notes from famed Los Angeles cobbler Pasquale Fabrizio. “Why else would you do it?” To take the next step, Maloof and husband Paul Nassif (together at left) mingled with industry heavyweights. “Footwear is an intricate business and we want to have as much knowledge as possible,” she said. “We don’t go into anything lightly.” But that doesn’t mean she isn’t already coming up with plans. “I’d like to start a collection for my friends,” she said, hinting she’d likely target the luxe arena and then move down in price.

But Maloof isn’t the only Bravo housewife stepping into the footwear industry. Kandi Buress from the Atlanta cast is readying to expand her Tags boutique with a full-fledged shoe store in the Peach State’s capital this spring.

Home Sweet Home
Put on your party hats. Matisse Footwear is celebrating its 10-year anniversary, and after a decade with the brand, President Michael Katz is skeptical about where he’ll be in another 10 years. “I’ll be [using] an oxygen tank,” he joked. “And hopefully still walking.” But in the near future, Katz told Insider the brand will move offices just a few blocks away from its current spot in El Segundo, Calif. And the new home just happens to be where he worked for eight years, as the co-founder of Seychelles. “It’s like buying the house you grew up in,” he said. But Katz won’t leave without a party. A paintball war and food fight among the staff are in the works.

Sweet Beat
Reebok is reviving its Classics line with a little help from Swizz Beatz. And the partnership, the music producer said, is serious business: “It’s not just me holding up a sneaker.” Reebok has already unveiled a new logo and is readying fresh product and a marketing campaign featuring Swizz. “We’re trying to grab [consumers] from a fashion standpoint, art standpoint, even a music standpoint,” said Swizz, who has been involved in designing the kicks — including one he named Grammy — and already has ideas for the next two years. Not bad for such a busy guy, who is New York University’s producer-in-residence, a designer for luxury car brand Aston Martin and who is working on his album “Haute Living.”

Poker Face
Donald Pliner did it. So did Jerry Turner. Is Jeff Swartz next? While Pliner and the American Sporting Goods chief both found new owners for their firms days apart, a source told Insider Swartz’ Timberland Co. — the object of much speculation over the years — has piqued the interest of at least one potential buyer, namely cash-rich Li & Fung, which continues to push deeper into footwear. Though Li & Fung didn’t respond to a request for comment as of press time, its U.S. president Rick Darling, who was spotted at FN Platform chatting with footwear execs, has made it known his firm is in a buying mood. — With contributions from Jocelyn Anderson, Lauren DiLello and Neil Weilheimer