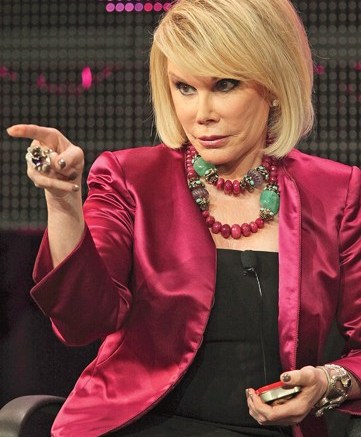 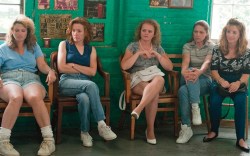 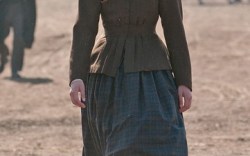 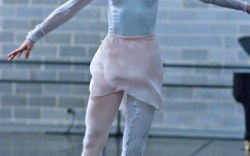 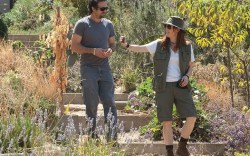 She’s the queen of mean when it comes to fashion commentary, but Joan Rivers, who is getting air time these days on her WE TV reality show “Joan & Melissa: Joan Knows Best?,” is doling out friendly advice before the Feb. 27 Oscars. “Wear your shoes two days before, so you know how to balance,” she said. And though long gowns are in vogue, Rivers said shoes still matter. “So many dresses have slits, and they always push [their] legs through.” Insider caught up with the comedian for more red-carpet insights.

Helena Bonham Carter made headlines with her mismatched shoes at the Golden Globes. What can she do to redeem herself?
“Six sessions of psychiatric treatment will straighten her out. [It] looked like she just got out of her straightjacket and escaped too quickly.”

In general, what shoe style is best for awards shows?
“I love the kitten heel, [but] a platform will make your feet feel better. [And] anything that makes your legs look amazing [is great]. Also go for color and glitz.”

Any styles to avoid?
“I don’t like clunky or gladiator [looks] because they shorten the leg.”

What will you be wearing Oscar night?
“Whatever Melissa chooses. I live at her house, so my wardrobe is limited. But I did go to Nine West, and the shoes look great. [Not that anyone will be able to tell], because no one gets that close to my feet except Tom Cruise.”

Picture Perfect
Nothing completes a great film like a well-dressed cast. Insider got the scoop on shoe styles featured in five of the best-picture nominees.

The Fighter
“I shop where the character would have shopped,” said costume designer Mark Bridges of the late-1980s, working-class looks for Christian Bale, Mark Wahlberg and their brood of sisters. Key looks? Old-school Reebok and Adidas styles, faux-croc monk straps and “grocery store sneakers.”

Black Swan
With most scenes set in the studio or on stage, pointe shoes by Freed of London and Mirella dominated. But costume designer Amy Westcott said she also put effort into street looks, like demure Stella McCartney flats for Natalie Portman and tall boots for sexy Mila Kunis.

The Kids Are All Right
For Julianne Moore’s landscaper wardrobe, costume designer Mary Claire Hannan went for distressed. “I preferred beat-up boots,” she said of looks by Frye and Timberland. She also avoided anything too feminine but did play up Moore’s toned legs by pairing over-the-ankle boots with gardening shorts.

The Social Network
Researching outfits was a Facebook search away. “So much of [the characters] lives was documented online [by] people who knew them,” said costume designer Jacqueline West. “Mark Zuckerberg [Jesse Eisenberg] was notorious for only wearing Adidas slides.”

The Shoe Goes To…
FN editors share their footwear picks for the Academy’s best-actress nominees on the big night.

Annette Bening
Past looks: Jimmy Choo, Christian Louboutin
Our pick: Stuart Weitzman’s embellished Gemex sandal. Bening (“The Kids Are All Right”) has gone all class this awards season and could easily pair the blinged-out style with a chic, floor-length gown.

Jennifer Lawrence
Past looks: Miu Miu, Roger Vivier
Our pick: Giuseppe Zanotti’s sparkly T-strap. Red carpet newcomer Lawrence (“Winter’s Bone”) could end up in just about anything. But if she wants to become a best-dressed regular, sleek looks from the top footwear names are a smart move.