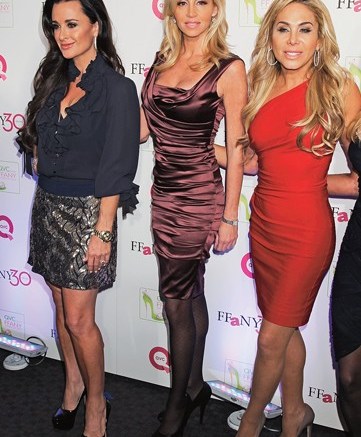 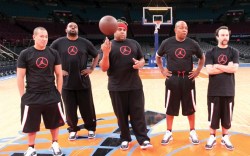 The Heels
The final episode of season one of “The Real Housewives of Beverly Hills” has aired, but that doesn’t mean Adrienne Maloof is ready for a break. The co-star of the Bravo reality hit is shopping her image at FN Platform next week and has invited a select group of footwear players to join her for cocktails at the Palms Casino Resort, which she co-owns with her family. Billed as a “unique look into the next ‘it’ brand opportunity,” the pre-show event allows industry insiders to mingle with the businesswoman, who also stopped by FFANY Shoes on Sale last fall (above, far right, with castmates Kyle Richards and Camille Grammer). “I’ve been approached by companies to work with them on launching a line of shoes, [but] one thing my family has learned is that it’s vital to be as educated as possible about every venture,” she said. “I’m thrilled to host this event and learn from some of the best minds in the business.” But don’t expect her to get too buddy-buddy. Maloof vowed she won’t indulge inquiries about what went down between housewives off-camera. “Absolutely not,” she said, laughing. “A girl never tells her secrets.”

Show & Sell
With the Oscars just a couple weeks off, nearly everyone is getting film fever. Take Auri Footwear: To promote the brand’s message, CEO Ori Rosenbaum created a short film reminiscent of classic spy flicks that both explains the technical aspects of his new women’s shoes and plays up the fashion. “We really stressed about how to [describe] the techno-nerdy part [of our shoes] in a cool way, and then we thought of James Bond, and it clicked,” he said. The result was “Agent A,” which debuted online last month. In the three-minute film, a female secret agent “steps into more technology than any fashion shoe in history has offered,” according to the Q-type scientist who then sends her off to save the world. Kitsch aside, Rosenbaum said the spot has raised the brand’s profile and secured meetings with retailers. And, as with any good spy franchise, a sequel is in the works.

Test Run
Prepping for the launch of its latest sneaker, Nike’s Jordan brand recently let a group of ballers live out their hoop dreams on the hardwood at Madison Square Garden (below). The Beaverton, Ore.-based brand hosted a wear test of the Air Jordan 2011, led by Idan Ravin — a basketball guru who’s trained Lebron James, Carmelo Anthony and Kobe Bryant. Watching from the sidelines was the shoe’s co-designer, Tom Luedecke. “I always get nervous,” he said of seeing the finished product in action. “This is a little different from the full-on wear testing we do in [Oregon] because it’s with a group of consumers. It’s good to get the feedback.” One thing the designer was calm about was evolving the Air Jordan line for 2012 and 2013. “Part of our process is to trust that we’ll get great insight from our athletes, like Michael [Jordan] and [designer] Tinker [Hatfield],” he said.