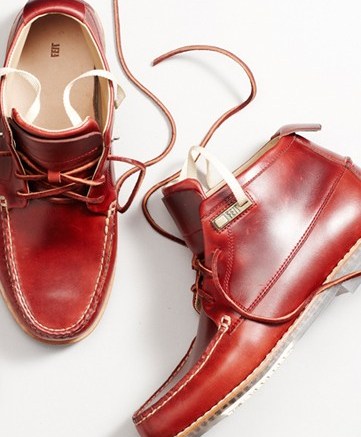 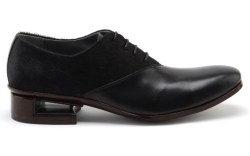 Feit’s Fit
Australian bespoke label is visiting the Big Apple. The brand, around since 2005, has opened a temporary showroom on Manhattan’s Lower East Side, where customers can get fitted for the main line or its made-to-order collection. The handmade footwear, available online at Feitdirect.com, is at 186 Orchard St. until March 20. Prices range from $300 for the regular line to $1,500 for bespoke. “This has all been below the radar until now,” said Feit co-founder and designer Tull Price. “We [set up] the temporary showroom so the made-to-order customers who know the brand can meet with us, touch and feel the product and measure their feet.”

Going Naked
For the launch of its men’s capsule collection, United Nude wanted feedback from the sartorial experts. The brand held a private reception for fashion stylists inside its New York flagship on Tuesday to celebrate its latest men’s style, the Hollow. “It’s a dress shoe, but it feels like an Ugg boot inside,” said Gregory Wein, celebrity stylist to stars such as Kelly Rowland, Jennifer Hudson and Jake Gyllenhaal. He added that he’d love to see Gyllenhaal or Hugh Jackman rocking the shoe at red-carpet events. Follow up on its most recent collaboration with designer Iris Van Herpen, a spokesperson for United Nude said the brand was searching for a new creative partner, but this time it would be an artist in the entertainment industry.

Close Up
Wayne Elsey isn’t camera shy. The Soles4Souls founder has made dozens of appearances on news programs since launching in 2004, but now his charity is aiming for even more exposure. Insider has learned TV commercials are in the works, with a production crew trailing Elsey on an upcoming trip back to Haiti. Though no air date was released, the spots will each be 30 seconds and run on cable networks.