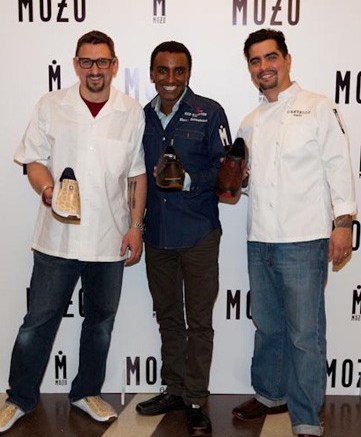 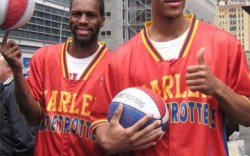 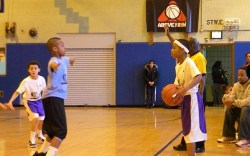 What’s Cooking?
Acclaimed chefs Marcus Samuelsson, Chris Cosentino and Aarón Sanchez now have signature shoes to go with their well-known dishes. The trio has collaborated with duty brand Mozo, for a series of edgy duty looks to debut this May. But even these tops chefs get a break from kitchen duty, when they turn in their performance footwear for pairs of sneaks, they told Insider. “I like skateboard sneakers such as Vans and old-school styles,” said California-bred Cosentino. Samuelsson said he opts for Converse, while Sanchez goes for Adidas. And Mozo will continue to cook things up in the kitchen. According to Mozo President Stuart Jenkins, a female chef will soon be joining the roster.

Going Global
The Harlem Globetrotters were spotted doing some fancy footwork in New York recently, part of the team’s “4 Times The Fun Tour.” Insider caught up with members Hi-Rise Brown and Hacksaw Hall, spotted on 42nd Street in custom sneaks made especially for the franchise by Reebok. According to the company, a year’s worth — 250 pairs — of the Talkin’ Crazy style were produced as part of a longstanding relationship with the Harlem Globetrotters. The red-white-and-blue pattern was designed to coordinate with the stars-and-stripes uniforms. Off court, when the Trotters make public appearances, they’re running around in Brooks, said a team spokesperson.

Bronx Tale
Above the Rim is going above and beyond to reach young ballers. The athletic brand, which relaunched last fall, teamed up with the Beyond Basketball Foundation to sponsor a program for underprivileged middle-school players in the Bronx, N.Y. “A lot of these young players are misguided, and there’s no structure in their homes,” said Bernard Bowen, co-founder of Beyond Basketball. “For this program, we wanted to emphasize being a respectful young man before being a basketball player and prepare them for that next chapter in their life.” ATR brand director Cesar Vizcarrondo said he’s wanted to implement community projects like this since joining the group six months ago. “We threw this together really quickly and made it happen. Now we’re learning and looking at other basketball programs in other cities,” he said. With similar “Assisting The Rise” projects ongoing in Los Angeles and Seattle next month, Vizcarrondo added that the brand is looking to expand to Miami and Houston.

Italian Fare
Ugg has been bitten by the high-fashion bug. Coming off a hot collaboration with luxe Jimmy Choo, Ugg is readying to launch a high-end collection of Italian-made shoes and bags for fall ’11, Insider has learned. In true Ugg form, the brand has kept mum on the specifics — including prices and key looks — but styles are expected to be more runway than surfer chic. Though the brand is keeping the line under wraps until an editor preview next month, Insider predicts even Ugg stilettos could feature pops of shearling.