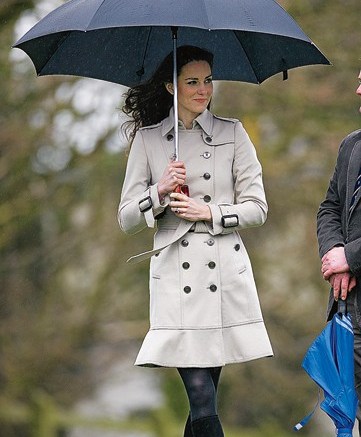 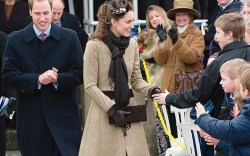 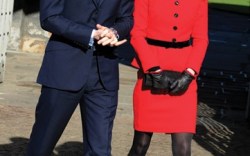 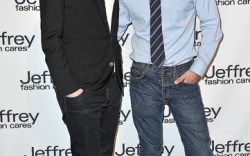 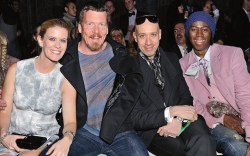 Royal Affair
Aquatalia is gaining royal recognition. Princess-to-be Kate Middleton has stepped out in the brand at least three times in recent weeks, each time prompting a spike in sales and a record-breaking jump in web traffic, of 300 to 400 percent. “I was ecstatic,” said brand Fashion Director Rena Krasnow, noting she was at the London buying office of British retailer Russell & Bromley when a fax came in saying Middleton had just purchased four pairs of Aquatalia boots. The rest, Krasnow said, was a whirlwind. Middleton, who is set to wed Prince William on April 29, has worn two of the styles — a black knee-high boot and a brown suede bootie — to three public events, including her first official outing as England’s next princess. “It’s the power of celebrity,” Krasnow said. “And she’s so hot right now.”

Shoe Play
Jason Wu is betting on footwear. Wu, who entered the category this spring, said he’s excited for what’s to come. “We’re pumping it up [for fall] — no pun intended,” he quipped. And to get his feet off the ground, Wu said he turned to Jeffrey Kalinsky as one of his mentors in the biz. The pair (together at right) was reunited on the Intrepid in New York last week at the annual Jeffrey Fashion Cares charity event. But Kalinsky, president of the Jeffrey stores in New York and Atlanta and the evening’s host, was a little more subdued about the footwear talk. When asked what shoes he chose for the evening, Kalinsky responded, “Do you want me to tell you the truth or lie?” Kalinsky claimed his motorcycle boots were Bottega Veneta, but his playful smile implied otherwise. He was, however, a bit more vocal about his affinity for Bravo’s “The Real Housewives” series. “I love them all,” Kalinsky said of the numerous casts. New York cast members Alex McCord and Simon van Kempen were among the evenings guests, as they used the press time to promote season four of their show, which premieres Thursday. McCord — a longtime supporter of young fashion talent — sported gray platform pumps by up-and-coming shoe designer Mallory Mustane, who has collaborated with jewelry line Modern Shades of Grey and apparel designer Keo’s Sexy MF. “I feel like I could run in these,” McCord said of the heels. But maybe she should leave the jogging to Robert Verdi, who sported stud-embellished sneakers by the red-sole king, Christian Louboutin. Verdi took in the charity runway show with “America’s Next Top Model” judge J. Alexander (above, with McCord and van Kempen), who donned G. Star kicks and had playfully twisted his necktie into a bow.

Breakfast Links
At first glance, the new collaboration between Manolo Blahnik and jewelry brand Tous might seem like it’s all about the ladies, with sweet charm necklaces featuring the iconic Campari heel, but Blahnik got a memento, too. Designer Rosa Oriol Tous created a single pair of custom-made cuff links for the designer, and he lent them to his right-hand man, U.S. brand president George Malkemus, for last week’s breakfast fêting the launch. Also in attendance was Blahnik’s niece and deputy managing director, Kristina Blahnik. But the designer collab isn’t the only partnership that has put Tous in the spotlight recently. Jennifer Lopez — fresh off her campaign for Louis Vuitton — has been tapped as the new face of the label and will promote the Manolo Blahnik charm in an upcoming ad. “Right now, ‘American Idol’ is the top show in America, and her song is topping the charts,” said Malkemus. “But Madame Tous signed her before [these last] big moments.” Tous was equally awe-struck. “She was incredibly sweet, not a diva,” she said of her meeting with the pop star, which — like the launch breakfast — took place at New York’s Four Seasons restaurant. “We sat at that table there when she agreed,” Tous said, pointing across the room. “We spoke in Spanish and talked about raising children while working. Her husband, Marc Anthony, had a concert that night, and she invited us to come. We sat in the second row.”

Walk This Way
Naked feet might be the stars of Toms Shoes’ fourth-annual One Day Without Shoes event tomorrow, but a few Hollywood names are slated to make cameos. The brand’s founder, Blake Mycoskie (below, at last year’s event), will be joined by Charlize Theron, Gillian Zinser from “90210” and Julia Jones of the “Twilight” franchise, all of whom plan to shed their shoes for the day. “We are so humbled to see influencers in the industry support this day,” said Mycoskie, adding that his aim is to top last year’s participation number of 250,000. “Our goal is to get 1 million people around the world to go [barefoot],” he said. And they certainly should get a boost this year. The entire New York Islanders hockey team is planning to can their kicks, as well as employees at AOL and Microsoft.