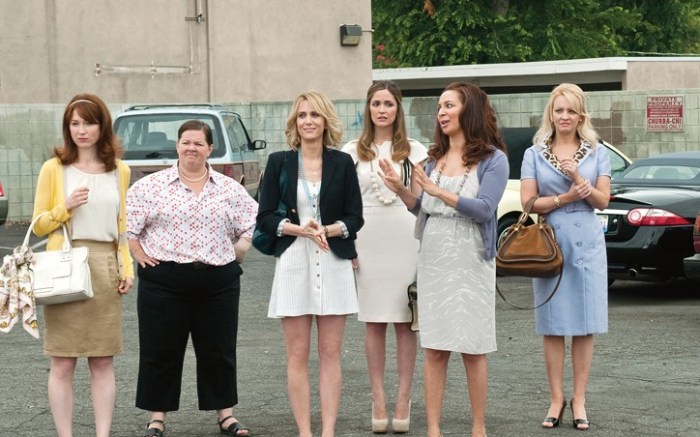 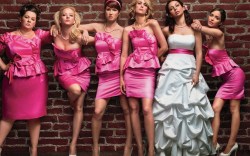 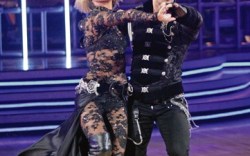 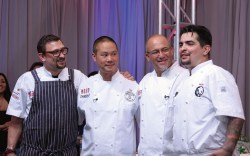 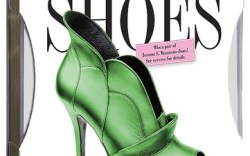 Girls’ Club
There’s one item this wedding party doesn’t have to worry about: shoes. For the big-screen flick “Bridesmaids,” which debuted last weekend, costume designer Leesa Evans pulled a variety of high-style looks, from Jimmy Choo to her personal fave, Yves Saint Laurent.

“I love the YSL [pumps], even though they are quite high in many cases,” said Evans, who shopped high-end stores such as Barneys to outfit funny ladies Kristen Wiig and Maya Rudolph in looks by Lanvin and Christian Louboutin.

While the picks bring a bit of glam to the comedy, Evans said the towering heels were a hit with the cast, too. “[The actresses] wanted to go home with some [pairs],” she said.

Evans dished with Insider about the film’s aisle-ready attire and standout shoe moments.

What influenced your shoe choices?
“It depended on the character. For Annie [played by Wiig], we used all vintage 1980s pumps because we wanted to give her a slight thrift-store but fashionable feel. We also used a lot of YSL [because there are] so many matching shoes and bags.”

What shoes were worn for the big day?
“The bride, Lillian [portrayed by Rudolph], wears René Caovilla with her wedding gown, and the rest of the girls wore dyed Jimmy Choos.”

How would you describe the main characters’ shoe styles?
“Annie wears a lot of vintage clothing. [She] doesn’t have a lot of money, so I chose shoes for her to be sexy without [costing] a lot. Helen [played by Rose Byrne] wears such sophisticated clothing that she needed shoes that spoke to that. Lillian has a sweetness [to her], so we used shoes with a little more playfulness, like Lanvin and some Christian Louboutin [styles].”

Do you have any favorite shoe scenes?
“There’s a scene where they all go to lunch before looking at bridesmaids’ dresses. They’re walking across this slightly seedy parking lot [all] dressed up, and there are so many gorgeous shoes [that really] stand out.”

How did having such a female-heavy cast influence your footwear selection process?
“It was different and fun. Usually it’s more balanced, but in this particular movie there were so many women that we needed more of everything: more clothes, more shoes, more accessories.”

Dance Off
Randall Christensen knows how to get in the groove. The “Dancing with the Stars” costume designer has been outfitting celeb contestants and their pro partners since season two. “Every single thing is custom made,” he said of the glitzy designs he cranks out weekly. “We are on pins and needles until the last second.” As for the fancy footwear, the designer and his team hit up Worldtone Dance in Los Angeles. Christensen often personalizes styles for contestants, such as adding rhinestones to recently voted-off rapper Romeo Miller’s shoes, or transforming a mid-calf dance boot into an over-the-knee showstopper for Disney star Chelsea Kane (above). When it comes to tricks of the trade, Christensen told Insider he often dyes the dance shoes nude to hide fumbled footwork and make legs look longer, though he couldn’t do much about Kirstie Alley’s left shoe slipping off during a waltz earlier this season. “I’ve seen it happen half a dozen times in my career,” Christensen said of the flub. “It was phenomenal how she finished the dance.” What he hadn’t seen, though, were the axed contestants burning their shoes on “Jimmy Kimmel Live” following the results show. Nonetheless, Christensen had no hard feelings. “When you have to be in those shoes six to eight hours a day, I can certainly understand why they’d want to do that.”

Kitchen Duty
Tony Hsieh may be a best-selling author, but don’t expect to see a cookbook by the Zappos.com CEO any time soon. Hsieh and Deckers Outdoor Corp. CEO Angel Martinez recently paired up with Food Network stars Chris Cosentino (near left) and Aarón Sanchez (far right) for a cook-off at Zappos’ headquarters (the celebrity chefs helped design shoes for Deckers’ Mozo brand of duty footwear). And while Hsieh has perfected a recipe for retail success, he’s not quite as skilled with a pot and pan. “I wouldn’t say I was really cooking, [but] it was fun to stand next to a chef,” said the exec, who, along with teammate Cosentino, wore the chef’s signature 5th Quarter Mozo style. Challenging the pair were Martinez and Sanchez, both in that chef’s D.O.D., or Day of the Dead, style. “I learned a thing or two from cooking with one of the country’s top chefs,” said Martinez. But after a heated competition, the cook-off ended in a tie. “Next time,” Hsieh joked, “Chris and Aarón should come back and take customer calls.”

Man of the Year
Jerome Rousseau is already looking forward to 2012. The designer tipped off Insider that his shoes will cover Workman Publishing Co.’s shoe calendars for the coming year, both the shoe-a-day and wall-hanging versions. “I’m excited. I’ve been a big fan and user of the calendars for many years, so it’s great to see my shoes on the cover,” said the designer, noting that he sent the publishers a sampling of high-res images, including one of the Antinea Poison style (at left). The calendars, which retail for $13 to $16, will be available at Barnes & Noble and Calendars.com. And two lucky customers could end up getting more than just a calendar. The company also chose Rousseau’s shoes for their first giveaway, where one winner for each calendar type will receive a pair of shoes from the label.