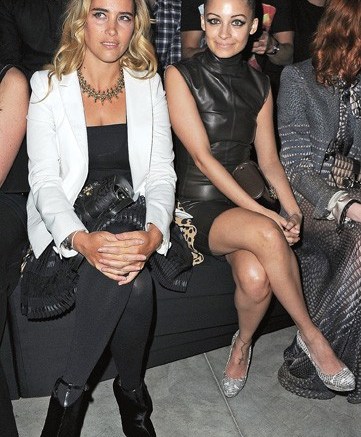 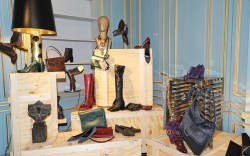 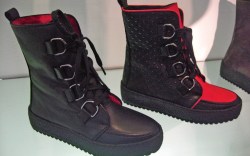 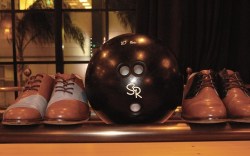 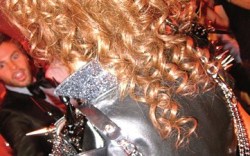 City of Lights
Paris was abuzz last week, with the industry’s stars out in full force. Nicole Richie, notably, created some commotion as she showcased her collection at Premiere Classe. “Everybody was freaking out. She’s so famous,” said Rick Cytrynbaum, co-founder of Modern Vintage, which produces Richie’s line. But it wasn’t all business. Richie (pictured front row at the Givenchy show with French actress Vahina Giocante) also squeezed in time to shop and visit a few restaurants during her four-day trip. At the Pollini preview at the Ritz, Insider caught up with Wynn Las Vegas’ Todd Hanshaw, who couldn’t help but be awed by Nicholas Kirkwood’s rapidly rising star. “[He’s] the most glamorous thing to come out of London since Mick Jagger,” he joked of Kirkwood, who was showing his fall collection for Pollini that featured quirky modern takes on the brand’s heritage, such as oversized tassels and stitching. Meanwhile, Georgina Goodman was diving further into the boot game to encourage women to try shearling on something besides the classic sheepskin boot. “Women want to feel cozy, but don’t need to cast off style to do so,” she said. The perfect balance? Her crepe-soled, shearling-lined brothel creepers, offered in color-blocked red and black (at left). Elsewhere, Roger Vivier was attracting globe-trotting women by focusing on fall footwear that can go from day to night. The label’s presentation (above, center) — a cheeky peep-show that began by knocking on a glass window — offered a peek at a model wearing the latest accessories from designer Bruno Frisoni, while a short film, which has become something of a trend among luxe shoe designers, featured another model strutting around with the newest Vivier pieces.

Pierre’s Pad
Is Pierre Hardy a techie? The designer told Insider he’s a major fan of the iPad, so much so that his fall inspiration came directly from creating digital patterns and designs on the Apple device. “I love the Brushes app,” Hardy said, noting that he used the program to “paint” the colorful design that marked his new collection and adorned his invitations and press kit. A blown-up reproduction of the original drawing also hung in the showroom to tie the line together. “It’s so easy to use,” he said. “I just put something together in the Brushes app and, boom boom, I can send it to the studio.”

Color Blocking
The men’s industry is about to get a splash of red. Christian Louboutin will open his first men’s store in Paris, on the same street as the women’s flagship boutique. Insider’s sources said the designer hopes to create “bookends” on Rue Jean-Jacques Rousseau by taking over the block with both shops. And soon after the designer will hit Sin City, with a men’s shop opening in Las Vegas. The red-sole king also has plans to expand his store count in Asia.

Alley Cats
George Esquivel is far from a bowling pro, but he sure knows how to knock ’em down. “I don’t bowl enough to be good,” the designer said. Still, his lack of experience on the lanes didn’t hinder his ability to craft a chic four-style collection of unisex bowling shoes for The Spare Room, a swank new gaming parlor in the Hollywood Roosevelt Hotel. Detailed with large chunks of color and statement-making black and white, the oxfords are getting plenty of attention. “Some people don’t want to take them off, so they have [started] selling them,” Esquivel said, noting the shoes can be rented for games or purchased for $800. And according to Spare Room founders Marc Rose and Med Abrous, more exclusive collaborations are in the works. Bowling bags and apparel seem obvious, but for a club that also offers backgammon, chess and checker boards made of wood and ostrich leather, just about anything is possible. “We don’t want to give anything away,” said Rose, “[but] we have tried to pay attention to everything, from the way you slide into your seat to the way your drink is presented.”

Reality Showings
Ruthie Davis is ready for her close-up. The designer was recently spotted flanked by reality TV cameras while wearing an over-the-top outfit designed by eccentric “Project Runway” alum Chris March. “It’s really juicy,” Davis said of the look, which included several pairs of her stilettos worked into unlikely garments. Though Davis (pictured in the look from behind) is under contract to keep mum on the show’s details, Insider did a little digital digging and discovered March — who famously disturbed Tim Gunn with a collection embellished with human hair — is working with a Bravo production team on a new reality series called “Mad Fashion.” But Davis is busy this season with more than show biz. For fall ’11, the New York-based designer, who started her career at Reebok, will roll out a collection of sneakers detailed with her signature spikes and bolts. “I wear Converse, but there’s not much out there that is really cool [in the athletic arena],” she said. “I’m going back to my roots.”

Going, Going, Soled
Haute heels went under the hammer for $3,000 at the Accessories Council’s Ninth Annual Shopping Soiree Silent Auction last week, held at Lord & Taylor’s Manhattan flagship. Beautiful, yes, but certainly not wearable. The shoes actually were part of a painted metal sculpture by California-based artist David Kracov called “Heart & Soles,” which had an estimated value of $8,500. Footwear auctions are normally a tricky endeavor at the event, said Karen Giberson, president of the Accessories Council. “We had some shoes in the past, but it’s a difficult item to bid on if it doesn’t fit you,” she said, explaining the noticeable absence of stilettos and pumps at the fundraiser. Bags, however, picked up the slack, as handbags and jewelry by brands such as Nancy Gonzalez and Kooba proved popular among bidders.