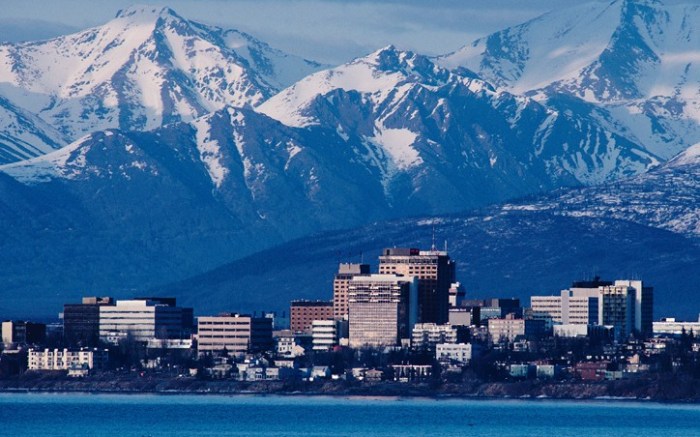 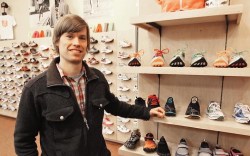 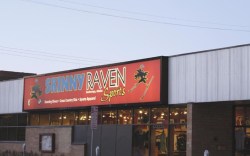 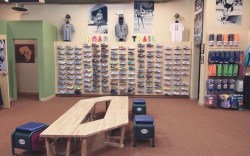 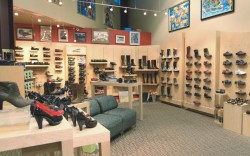 Not every store can host running events, test shoes and hold clinics on its very own outdoor track.

When Anchorage, Alaska-based Skinny Raven opened its second location two months ago, the retailer added $50,000 to the budget to build a track on the front of the one-acre property. “It was an interesting undertaking because the property had a pretty significant slope away from the building, so we had to put a lot of fill-in to flatten it out,” said President and CEO Daniel Greenhalgh. “It was a big project.”

But as the store has made a name for itself in the area, it has attracted serious runners with its special features, its array of running brands, including Adidas, Asics, New Balance, Reebok, Saucony and Vibram, and its selection of casual footwear brands. And with a women’s fashion footwear shop called Her Turn across the street from the first location, the company is growing its customer base. In fact, Greenhalgh has begun exploring ways to expand the concept in the state.

“We look at Alaska and see other opportunities here in terms of Juno or Wasilla,” he said. “It’s something we’re considering. Right now, what’s next for us is ensuring the success of our existing locations and making sure we continue to do a better job for our customers who are currently shopping with us and future customers.”

Greenhalgh said that while the store did see a slight dip in sales with the economic downturn in late 2008, it closed out 2010 up in the low single digits.

The first Skinny Raven location bowed in 1994 as a specialty running boutique, a rarity in the Anchorage retail market, Greenhalgh said. At that time, most serious runners bought their shoes through mail order, so when the retailer opened, customers took notice of the 2,500-sq.-ft. store stocked with some of their favorites. “There really wasn’t anybody focusing on [running here],” Greenhalgh said. “Nobody was addressing that demand.”

Soon after Skinny Raven opened, however, another opportunity arose for casual, post-workout shoes, and the store began stocking styles from Dansko. At that time, sales of casual styles made up just 10 percent of the business. But as it grew, Greenhalgh said he realized the store required more floor space to dedicate to those “early wellness” products.

“In about 2003, we really had to make the decision [about whether] we were going to continue to grow that casual business,” said the retailer. “We had to grow our square footage and separate the [product categories] in the store, so we built a whole new wing and added another 1,200 square feet … and separated the two businesses.”

Mark Diehl, VP of sales at Dansko, said Skinny Raven was one of the first retailers to grasp the connection between athletic and recuperative footwear products. “It was due to this insight and [the store’s] ongoing courage to think outside the box that has led them from being a specialty running store to the regional destination for athletic and comfort footwear,” he said. “They are a phenomenal retail partner and have helped establish Anchorage as one of the leading cities in terms of Dansko wearers.”

Ryan O’Connell, a sales representative for Sorel, agreed that the team at Skinny Raven has an intuitive ability to see what’s next in the marketplace. “The buyers have a keen eye for the latest trends and they build outstanding assortments,” he said. “Custom-built footwear walls and table displays make the product stand out.”

“[Skinny Raven’s] prime minister of purchasing, John Clark, does a great job offering unique insights to the channel, and his feedback is highly valued by vendors and peers in the industry,” added Kevin Adams, channel sales manager for specialty running at New Balance.

Today, the front of the store features casual comfort and fashion footwear apparel and accessories, while the back space is dedicated to running footwear, apparel and associated products. Sales are generally split evenly between the two categories, which Greenhalgh said has helped to even out sales throughout the year.

“Up here, running specialty can be a seasonal business,” Greenhalgh said. “It also helps that our busiest times in the casual business tend to be our slower times in the [running] business, so it’s very complementary.”

Greenhalgh said roughly 70 percent of the store’s revenue comes from footwear, with the remainder in apparel and accessories. Sales are balanced between men’s and women’s product, with about 5 percent done in children’s. Price points range from $90 to $140.

When the retailer opened its second running location — a 2,000-sq.-ft. space outside the downtown area — the new store featured the same assortment of footwear and added Miz Mooz, OTBT and Ugg. And different brands will continue to be introduced at that store, Greenhalgh said. “As time goes on, we’ll make it more interesting for that customer who may shop at both stores,” he said. “A lot of people don’t want to drive downtown, so it’s a nice place. It’s a bit more of a neighborhood store.”

But while running may be at the core of Skinny Raven’s business, it’s not the only focus going forward.

In 2005, Greenhalgh said the company branched out into more fashionable product for women, launching a new concept shop called Her Turn. The 1,500-sq.-ft. store features an assortment of brands, including Bettye Muller, Camper, Dolce Vita, Faryl Robin, Frye and Ugg. Shoes range from $100 to $300 with boots reaching $650.

The store features bamboo floors and exposed wood ceilings with a long curved wall where most of the shoes are displayed.

While the concept has proven a success, Greenhalgh said he would be hesitant to open another due to the fact that part of the store’s charm is its single location. Instead, he said, future Skinny Raven stores would include aspects and brands from Her Turn. “If we were to open another location, we might include some of that concept within it if we had adequate square footage,” Greenhalgh said. “It could even be a store-within-a-store concept.”

The biggest challenges for the company now are shipping issues and the cost and timing of receiving new product. Reorders with two-day shipping can cost as much as $15 per pair, forcing Greenhalgh to build in an economy of scale to his shipments. “You have to consolidate everything, and it’s [about] a two-week transit time, which can make business planning a little challenging,” he said. “But we’ve learned to live with it.”

Looking ahead, Greenhalgh said his firm is working on projects with Sorel and Adidas. Last April, the retailer partnered with Adidas on the adiSTAR Raven trail running shoe, which was sold at Skinny Raven and to other retailers. A second shoe, the Raven 2, has been redesigned and is slated to drop in June.

One area where the retailer won’t tread, however, is online. While Greenhalgh said he and his staff are well versed in the possible upside of e-commerce, he has made a strategic decision to focus on the in-store experience.

“It’s not that we feel it’s something we couldn’t do. It’s just that you lose that touch and feel with the customer,” he said. “We like what we do here and focus on helping our customers. I know it seems archaic, but it keeps them coming back. We have a unique personality to our business.”