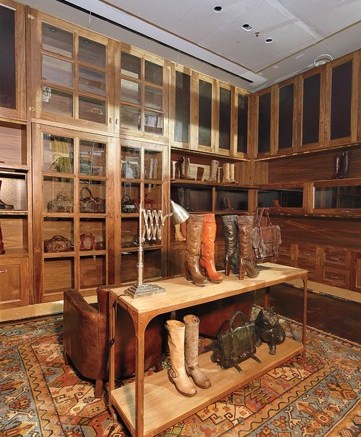 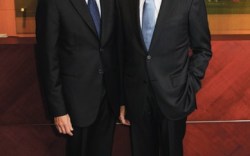 Frye might be turning 150 next year, but the brand is just getting started.

Next week, the label will open its inaugural store in New York’s Soho neighborhood and debut its first marketing campaign in decades. It also is eyeing aggressive international growth, deeper product expansion and a larger Internet presence.

Larry Tarica, co-president of Jimlar, said the company has been energized since it was bought last August by LF USA, a division of Li & Fung Ltd.

“[They are] opening our eyes to how we can continue to do what we’re doing, but do it better,” Tarica said.

With Li & Fung’s backing, Frye is leaping into the retail arena, starting with the new boutique on Spring Street.

The 6,000-sq.-ft. shop, which opens on Aug. 1, will showcase a mix of women’s and men’s product, in addition to handbags and accessories. It will feature several lounge areas that will accomodate special events and trunk shows. In-store services such as boot personalization also will be offered.

“We waited to get the collection to the point where we thought it was really ready,” Tarica said. “This is a big deal for us.”

Timed with the opening, Frye also will launch a digital, print and outdoor campaign called “Eyes Open Feet First” that will highlight the brand’s American heritage.

And while Frye is branching out with its own store, the label continues to gain traction with its retail accounts, including department stores Lord & Taylor and Nordstrom, and independents such as Ron White Shoes in Canada.

Liz Rodbell, EVP of merchandising at Lord & Taylor, said that Frye has experienced “major growth” over the past several seasons.

“Each season we continue to expand the assortment,” she said, naming the Veronica slouch and the Dorado as best sellers. “The brand exudes a classic, all-American authenticity, which resonates with our consumer. The high quality and great craftsmanship really stand out.”

Ron White, CEO and creative director of Ron White Shoes, said Frye is a top performer across his seven stores in Toronto. “Frye continues to execute on keeping its DNA consistent and pure,” he said. “When our customers see product from Frye, they can tell it’s Frye before they even see the label.”

Here, Tarica sounds off on the brand’s big expansion plans, life with Li & Fung and Jimlar’s other upcoming footwear projects.

What is the significance of your first store?
LT: We have had absolutely spectacular business with our retail partners, but it’s very difficult for any of them to represent Frye in its breadth. The second reason for it is to get more opportunity for direct feedback from our consumers. Assuming that we achieve some of the goals we have for the store, we will very soon want to add flagship locations in other parts of America, Europe and Asia. We’re not sure what the pace would be or what the maximum would be.

Are your wholesale partners concerned that branded retail stores might take away from their business?
LT: Doing this is going to make the brand more relevant, and that should help all of our [partners’] businesses too. This would be different if our long-term intention was to be a direct-to-consumer marketer with hundreds of stores, [but that is] absolutely not our intention.

You’ve also been expanding on the product front. What areas are you focusing on?
LT: We have added accessories [such as handbags and belts] — that’s a very small business for us — and we expect that to grow significantly over time. The second major growth initiative, the men’s business, began about three or four years ago. And we have a terrific group of kids’ shoes, called Small Frye. It’s cute and fun and does very well at retail. Beyond footwear and accessories, the brand certainly has the ability to do other leather goods: jackets and things like that. And we [also have] the license to enter the denim market, [but] we’ve really been very cautious in thinking about anything apparel driven because we don’t feel like we’re experts on that. We are an authority in leather goods, so how far do we want to stretch that? We’re not closing the door on [apparel], but it’s not part of the short-term [goal].

Has Li & Fung’s involvement sped up your growth plans for Frye and Jimlar as a whole?
LT: We’ve had the advantage of having Li & Fung encourage us to take some of the things we are doing and do them more aggressively and globally. Also, being part of a company that has a broad understanding of the apparel industry has been very helpful to us because we’ve been able to interact with other parts of the company to try to understand what drives apparel, which really helps us to think a little more creatively about what our business should be.

What international areas are you targeting?
LT: A number of years ago, we established Jimlar Europe and Jimlar Asia. Our premise there was to see if we could replicate an onshore model in those countries that were similar to what we were doing in the U.S. Our growth in Europe has been terrific, and we’re starting to have excellent development of our Asian business as well. There, we are focusing on both China and the Pacific Rim. This is very consistent with Li & Fung’s vision [for the future].

Jimlar was a privately held family business for so long and now you’re part of a giant public company. Has that been a difficult transition?
LT: No, we understood going into this that when you become part of a bigger organization, and particularly when you become part of a public organization, you need to be mindful of a broader range of goals. As part of Li & Fung we have a broader spectrum of stakeholders and we expected that.

Is Li & Fung looking to add more brands under the Jimlar portfolio?
LT: There’s no question that the Li & Fung model includes both organic growth and us entering other important market niches through acquisitions. It is our hope that we will find qualified candidates for that and that we will add to our portfolio over time.

You’ve already expanded with the new Rachel Zoe collection, which will launch for fall ’11. Can you tell us more about that?
LT: It’s really an exciting position for us because it’s a significant launch in women’s contemporary footwear. We have an opportunity to both make a statement and learn.

The entire industry is grappling with higher sourcing costs and price increases. How is that affecting you?
LT: We recognize that people are generally still struggling, and if we want them to buy our products … we really have to stimulate them, excite them and give them great value. And the challenges with an evolving supply-chain environment are forcing us to all be smarter and work harder. We’re very fortunate that we’re part of Li & Fung because they are experts in this area. We have a very optimistic view about our business for the second half of 2011 [and] 2012.