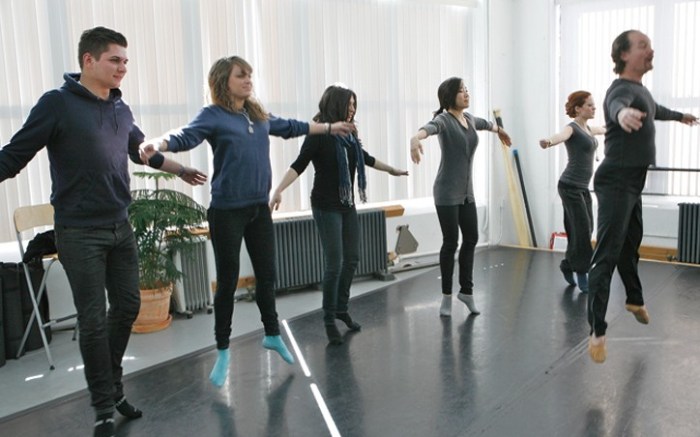 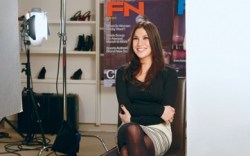 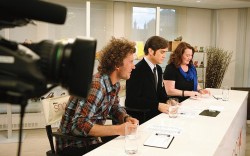 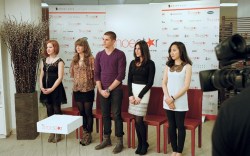 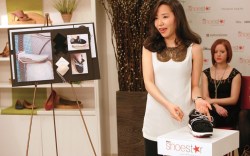 And then there were four.

The second FN Shoe Star challenge featured a series of unexpected twists, leaving many of the Fashion Institute of Technology contestants uncertain about their strategy. The students were tasked with creating a rocker-bottom shoe that was aesthetically pleasing. The catch? They could only use recycled items collected at Material for the Arts, a Long Island City, N.Y.-based warehouse for the arts community. “I was thrown off,” said Keena Fleming.

In the end, Hyojin Choi — who was viewed by several contestants as their greatest competition because of her intricate sketches — was eliminated after the judges criticized her design for being clunky and overly complicated.

“I was not totally surprised. I got the wrong idea about what they wanted in terms of it being commercial,” Choi said. “My shoe was totally different [from the rest].”

While Choi admitted that she struggled with the assignment, she wasn’t the only one.

Matthew Ciszek, who won the first challenge, also ran into obstacles during the three-week period the students had to design their shoe. A week prior to the judgment, he decided to scrap his original design.

“I didn’t like how it came out. When I finished the shoe, it wasn’t aesthetically pleasing,” he said. “Even if I had to stay up for the next three days, I wanted to make a shoe I’m happy with.”

Once the judgment day arrived, however, Ciszek felt more confident about his look, a solid black shoe made out of binder portfolios, zippers and sweat pants to create a faux leather appeal. And thanks to his prior win, he got to choose the order of the three-minute presentations and elected himself to go first. “I wanted to be the first presentation in everyone’s minds,” he said.

After Ciszek’s presentation, they got a look at Fleming’s design: a white shoe with pops of purple and laces made from a necklace. The insole was also padded with a sock layer. “Once I got out of the funk of ‘this is so different,’ I wanted to embrace the athletic look,” she said.

Choi was the third presenter, showing off a black shoe with a pop of hot pink pulled from stripped Internet wire. “The first thing I was concerned about was the color story on the outsole,” she said. Choi also included watch rubber and a baby blanket for materials.

As the fourth presenter, Rachel Fishbein showcased another black shoe, with mesh detail and replaceable color swatches. For research, Fishbein visited retail stores that sold toning product. “I even ran on the treadmill in the shoes,” she said.

Shannon Ramiza was last, presenting a more fashion-forward look: a bootie in cream, taupe and black with crystal detailing on the zipper. “The market needs a fashionable rocker bottom,” she said. “It’s girly and edgy.”

In the end, Ciszek’s design was voted the winner again.

“I showed the judges that by completing it on time, I believe in what I do,” he said. “It’s all about believing in your design.”

While the panel was pleased with Ciszek’s style, they said many of the students should have focused more on designing a functional shoe for the target toning consumer.

“Ultimately, I chose Matthew as my favorite because his [shoe] was the most commercial,” said Mycoskie. “Boring sells. People like black, they like simple.”

Gibbs echoed that it’s important to know your audience. “It was a tough challenge quality-wise. They need to really work on designing for a customer instead of [creating] what’s artistic,” she said.

And although Ciszek prevailed a second time, Atmore said he would like to see more passion from the remaining contestants. “[Matthew’s] design was safe, but successful,” he said. “We have to see a lot more commitment. They have to be excited about their work.”

Despite the criticisms about her design, Choi left the competition feeling upbeat.

“I’m just going to keep designing what I like,” she said. “I feel good about what I’ve done, and I [still] want to be a shoe designer.”

The Next Step
In the third assignment, the contestants are meeting with a uniquely challenging type of client: a real-life bride-to-be. After viewing her Vera Wang dress, learning about the couple and their wedding plans, they’ll be charged with designing a shoe for her dream day. And the biggest surprise of all? Special guest Vera Wang will join the judging panel.