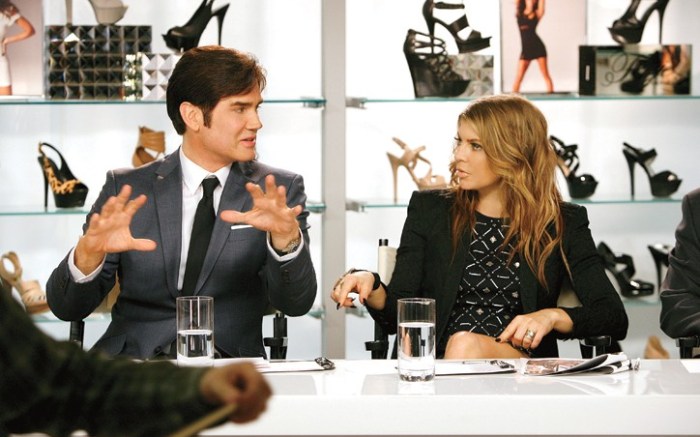 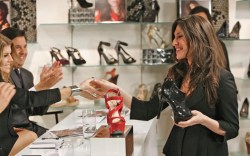 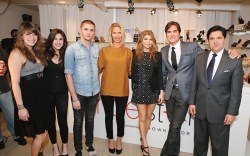 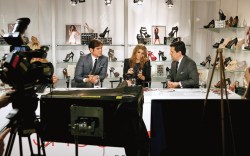 Excitement was high during challenge four of FN Shoe Star, when Grammy Award-winning musician and footwear designer Fergie joined the judges’ panel. And the Fashion Institute of Technology students were feeling nervous about presenting their designs for Fergie’s fall footwear line to the songstress herself.

“The pressure is intense. The celebrity aspect is pretty intimidating,” said Matthew Ciszek.

But Fergie immediately connected with the three contestants — Ciszek, Rachel Fishbein and Keena Fleming —  and said she was impressed by the amount of time they spent researching her footwear lines and fashion sensibility.

“When I saw these three completely immersed in my world, it was really touching,” the star said. “I got really emotionally involved. I wear my heart on my sleeve.”

And while she understood the anxiety, Fergie said she was wowed by the talent of the young designers.

“I would definitely be nervous if I was in a shoe competition,” she said. “But hopefully, they feel confident in [their work] because they are here for a reason.”

The students also had to present in front of other big-name judges, including Brandon Holley, editor-in-chief of Lucky; Tony Pelle, group VP and DMM of shoes for Macy’s; and lead judge Michael Atmore, editorial director of Footwear News.

In the end, one design didn’t meet the demands of the panel. Surprisingly, it was Ciszek, the winner of the first three challenges, who was eliminated for playing it safe.

“[My design] was too menswear-[inspired], too simple and not Fergalicious enough,” Ciszek said after the judgment. “I still like my shoe, but I had a feeling it wouldn’t be [considered] sexy.”

Ciszek showcased a lace-up bootie with fur lining and a cushioned insole that was designed to appeal to a mass audience. “When I was researching the [customer], I found a Fergie girl, a Fergie lady and a Fergie woman,” he said.

But Fishbein and Fleming seemed to know the Fergie customer better, and both scored points for sex appeal.

Fleming showed a peep-toe platform pump with gold studs and zipper details. “I wanted the [shoe] to be commercial for the line, but I still wanted to keep that funky edge,” she said.

Fishbein presented a peep-toe sequined bootie in all black, designed for the Fergie girl who wants to stand out and “feel different.” “[The customer] is edgy, she’s a rocker and she’s sexy. She looks at the latest and greatest fashion trends,” Fishbein said, adding that “black is a very sellable color.”

Fishbein was deemed the winner, but said she was surprised to beat Ciszek.

“I’m so excited I won, but I was never really expecting it because Matt kept winning,” she said. “Fergie likes my shoe, so that’s really exciting.”

Atmore noted that challenge four was “by far” the toughest one yet. “You have Fergie herself, a really influential retailer and two magazine editors judging. Young designers wouldn’t have this kind of access and feedback.”

Pelle — who mingled with Fergie again the next day during a jammed-packed appearance at Macy’s for her shoe line — said the contestants rose to the occasion.

“I was shocked at the mechanics and construction these young students did in two weeks,” he said. But still, Pelle felt the students could have done more research on the line. “You really need to understand who your customer is. You have to understand your audience.”

Holley was also pleased with the up-and-coming designers. “You often think about what a young shoe designer does, and this is really impressive,” said the editor, who met Fergie — who is gracing the June cover of Lucky — for the first time at FN Shoe Star.

“She just has such incredible style,” Holley said.

And Fergie offered her best piece of design advice to the new FIT graduates. “You’re not going to please everyone, especially if you’re a risk taker [like] I am,” she said. “You have to commit to your look and own it.”

Overall, she was upbeat on the young designers’ prospects. “Based on what we saw today, We have a new generation of shoe designers. I’m so excited about the fresh perspective they bring.”

For his part, Ciszek said he was looking forward to going back to his roots in men’s shoes. “It’s a challenge for me to design women’s. My head doesn’t work like that,” he said. “But I’m a solid designer and I’m still confident in my [work].”

The Next Step:
In the fifth and final challenge, Fleming and Fishbein will create their own collection and craft a business plan for it. The catch? The line needs to be designed specifically to sell at Saks Fifth Avenue. The final two will battle it out in front of judges Atmore, Saks President and Chief Merchandising Officer Ron Frasch and Brown Shoe Co. President and CEO Diane Sullivan for the ultimate prize, a job at Brown Shoe.