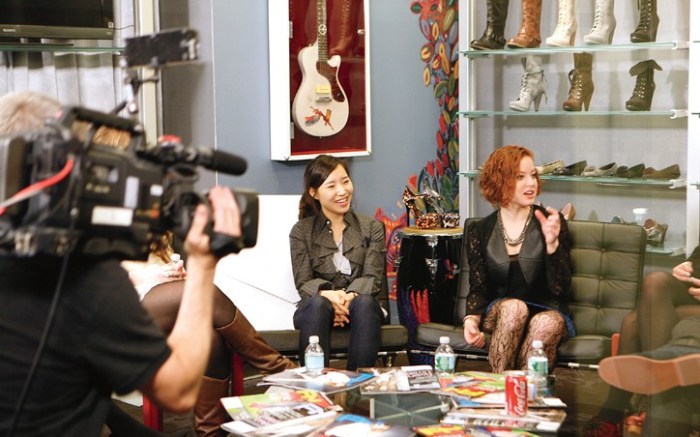 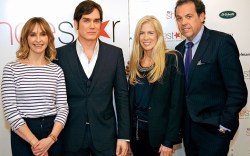 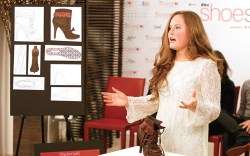 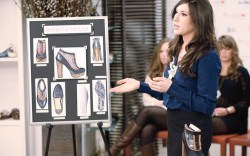 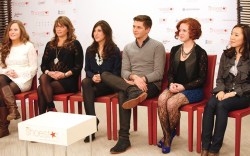 During their first challenge for FN Shoe Star, the contestants immersed themselves in the world of designer Rebecca Taylor. Their task: to create a shoe for her fall collection after attending the designer’s show at New York Fashion Week.

When it came time for the final judging, Maggie Kervick, whose innovative sketches and competitive spirit helped her stand out during the audition stages, was ultimately eliminated from the contest.

Here’s how it all went down: After spending two weeks in mid-February designing a shoe for Taylor’s fall ’11 line, the relaxed contestants were ready to unveil their designs in front of the judging panel. Taylor joined lead judge Michael Atmore, FN’s editorial director, and footwear power couple Sam and Libby Edelman to determine which students would move on to round two.

While they waited for the cameras to roll, several of the contestants said they were wowed by Taylor’s work and felt eager to impress her.

Matthew Ciszek was attracted to the designer’s warm spirit. “I want Rebecca Taylor to be my aunt,” he quipped.

As they began their three-minute presentations for the judges — in an order determined by Shannon Ramiza, who won the quick-fire sketch challenge — it was clear the contestants had done their homework about the fashion label.

Keena Fleming was up first, presenting her lace-up wedge in taupe and aubergine. Fleming also included a hand-painted floral design on the lining. “The color story I pulled out of the [ready-to-wear] collection,” she said. “A lot of Rebecca Taylor pieces are revealing and sexy in a subtle way, and I wanted to [represent] that.”

Kervick incorporated ruffles, mixed leathers, knit details and lacing into her design, even though her initial plan was to keep the shoe simple. “[Taylor] has a clean and tailored look, so you’re not going to throw tons of elements [into your design],” she said.

As the third presenter, Ciszek opted for a gray bootie with a tweed elastic and lace details under the heel, suitable for the walk down the runway. “What really spoke to me was a modern and feminine woman,” he said. “Comfort is important and I wanted something that [women] can wear at the office and for hours.”

Fishbein showed a wood platform with lace details, and went the extra mile with framed presentation boards and her own shoebox, created for the look. “It’s really important to know the whole collection,” said Fishbein.

Hyojin Choi designed a strappy sandal with floral details and found inspiration from the 1970s-style looks. “[The collection] is romantic and embellished, [so] I was trying to apply all these things,” she said.

And the final presenter, Ramiza, showcased a convertible look, with fur on a blue-and-tan boot. While the judges deliberated, she remained confident. “It went fabulous and I feel good,” she said. “The fur will stand out in their minds.”

Overall, the judges were pleased with the designs from the first challenge. “We were impressed. There was a lot of creativity,” said Libby Edelman.

Taylor added she was excited about the group’s talent. “When you see that each of them comes from such a sincere and talented place and is putting their best foot forward, it’s hard to say that one is better than the others,” she said. “It’s very exciting. The new generation of designers is going to bring newness and freshness.”

Ultimately, Ciszek was named the winner, and Kervick’s design fell short, eliminating her from the competition.

Ciszek, who immediately texted his mom to tell her the good news, said he was excited about the win because the challenge forced him to venture outside his comfort zone and design in the women’s world.

Looking ahead, Atmore called on the contestants to deliver not only top-notch designs but also stronger presentations. “It’s going to be a lot tougher for them than they think,” he said. “A lot of pressure is put on designers in the industry.”

Sam Edelman agreed that entering the work force isn’t easy. “I always say the glass is half full — you have to be prepared to get coffee,” he said.

And though Kervick was eliminated, she seemed determined to make her mark on the industry. “I still stand behind my design. Sometimes what you like isn’t always liked by others,” she said. “Someday, Mr. Atmore will be featuring me in his magazine.”

The Next Step
In the second challenge, the contestants will have to learn to multitask with an assignment that has some surprising twists. And the surprise guest judge will be someone who has made a mark on the footwear world with his out-of-the-box business model.