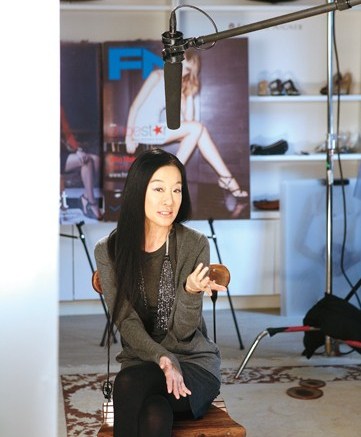 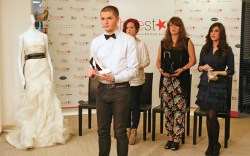 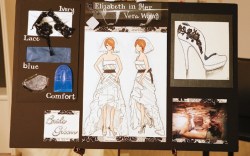 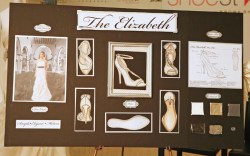 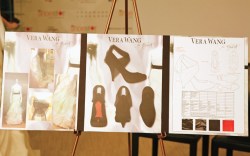 For the third challenge, FN Shoe Star called in bridal powerhouse Vera Wang and one of her clients, Elizabeth Aguilar, to join the judges’ panel. And the contestants from the Fashion Institute of Technology were asked to create a wedding shoe suitable for Aguilar’s walk down the aisle in November, when she’ll be wearing a dress designed by Wang.

“The most important thing [for the students] to factor in is who the bride is,” said Wang. “And a wedding shoe represents an emotional investment as well. It becomes, in essence, the glass slipper.”

For her part, Aguilar was excited to get face time with the designer who would play such a huge role in her big day. “Not many [women] can say they met Vera.”

For the contestants, who first met Aguilar during the quick challenge to get a feel for her personal style and discuss her wedding plans [see sidebar for details], excitement was paired with nerves. “I was worried because I heard [Vera Wang] was a tough cookie,” said Keena Fleming. “She’s such a big deal.”

Ultimately, one design fell short. Shannon Ramiza, who stood out in previous challenges with her eccentric and unique style, was eliminated for her combination of black lace on a stark white satin style, according to the judges.

“I learned that playing it safe is probably good for a competition,” said Ramiza. “This challenge was too commercial for me. Clearly, they were looking for something more simple.”

As the winner of the first two competitions, Matthew Ciszek chose the order of the presentations at the Brown Shoe Co. showroom and decided to appear first again in front of the panel of judges, which included main judge FN Editorial Director Michael Atmore, in addition to Wang and Aguilar.

“I wanted to take a classic shoe and add a modern twist,” said Ciszek of his ivory d’Orsay calfskin pump with a black ruched 3-inch heel. After Aguilar told the students she planned to do some salsa dancing at her wedding in Puerto Rico, Ciszek also added a comfort footbed to his style.

“I really went outside of the traditional bridal world,” said Fleming. “I put the white standard details aside. I wanted to design something different because of the black sash [on her dress].”

Rachel Fishbein took a more traditional approach. Her satin, 3-inch peep-toe heel with an ankle strap featured crystal beading embellishments. “I went for simple, elegant and modern,” Fishbein said. “This [shoe] has a great combination of those things.”

Ramiza was the final presenter, with a white d’Orsay pump featuring hand-sewn black lace details and a periwinkle lining to honor the “something blue” tradition. “The type of bride [for this shoe] would be romantic,” said Ramiza. “The lace will look beautiful at all angles while dancing.”

But the third time proved a charm for Ciszek, who was voted the winner again. “I’m very excited. Three times in a row is pretty good,” he said. “It’s a common thread that I’m able to remove myself and design [for someone else].”

And while Ciszek was criticized for creating a closed-toe look, the overall craftsmanship of his shoe still wowed the judges.

“The quality of the shoe was impressive, but an open toe would have made the [pump] a tad sexier,” said Wang, adding that the contestants should have put more sizzle into their looks given the location of the wedding in Puerto Rico. “There was some sex appeal needed.”

To that end, Aguilar said she would definitely search for an open-toe look after hearing Wang’s feedback. Of the styles presented, she said Ciszek was the clear winner.

“I wasn’t expecting to like Matthew’s [design] as much as I did. The sketch looked so difficult to achieve, and he did it,” said Aguilar. “I had never seen a bridal shoe in calfskin before and that was a nice detail.”

But overall, Atmore said he would like to see more unique looks moving forward. “This was an extremely intense challenge. You had the bride and the world’s predominant wedding designer as judges,” said Atmore. “They stepped it up one level, but I was expecting to see more diversity.”

And although Ramiza was eliminated, she is still confident in her personal design style. “I learned not everyone will love your design, but I’m not going to change my approach,” she said. “I’m not commercial and I’m not tame, so I’m going to [target] a niche and edgy market.”

The Next Step
In the fourth challenge, the final three will get a dose of star power when Grammy Award-winning musician Fergie joins the judges’ panel. The challenge kicks off with the contestants spending time with the superstar’s agent and stylist to learn more about her fashion sensibility before heading back to the design studio to create a shoe that could fit in with the fall ’11 Fergie Footwear collection.