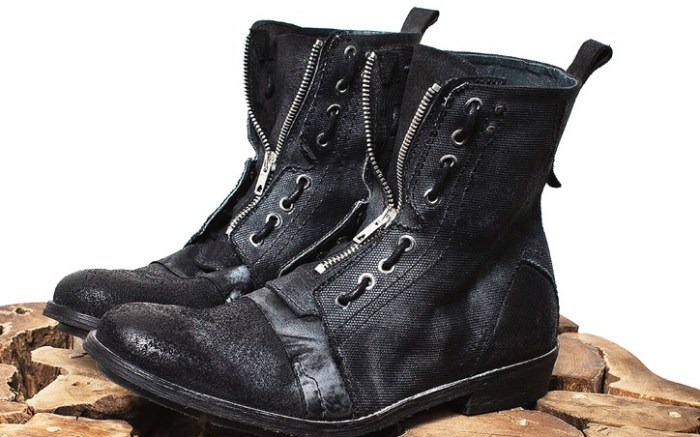 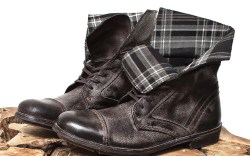 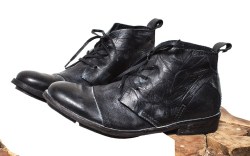 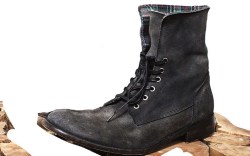 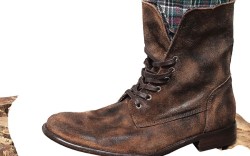 Rugged is the word at Rogue.

The New York-based men’s brand, primarily known for its masculine outerwear, will introduce footwear this fall. The seven styles are heavy on boots with military and motorcycle influences, but also include brogues and laceups. Retailing for $225 to $395, the shoes are made of washed leathers and suedes in Portugal.

Designer Jimmy Reilly said that though the men’s market is hot right now, he decided to start the line because he still didn’t see a big range in footwear. “There’s not a lot of variety out there,” he said. “The men’s market was stale for a long time.”

And rather than license out the new category, the company chose to keep it in-house as a learning experience and to exert creative control. “Jimmy wants to understand all of the business,” said Jon McKinney, president of global brand development. “And we wanted to decide everything — pricing, components — so now we are more knowledgeable.”

In addition to footwear, the brand also will launch bags for fall, including a shoulder style, tote and messenger bag in garment-dyed canvas and leather, at specialty stores nationwide.

Already popular among male celebrity fans such as actor Kevin Bacon, “Twilight” star Taylor Lautner and musician Gavin Rossdale, the brand may launch a women’s collection down the line.

“With men’s, it takes a while to catch on, but people are willing to see it through,” said Reilly. “Soon, the world will be going Rogue.”

The Designer
Jimmy Reilly founded Rogue in 1999 as an outerwear label and has since expanded to sportswear. The brand is sold in Saks Fifth Avenue, Holt Renfrew, Scoop and Fred Segal.

The Inspiration
“The inspiration comes from the clothing line,” said Reilly. “It’s how we dress.” The goal, he added, was a finished look from head to toe.

The Buzz
Neiman Marcus will carry the shoes exclusively in 13 stores for fall ’11. “We were immediately drawn to the sensibility of Rogue’s new footwear collection,” said Nickelson Wooster, Neiman Marcus’ men’s fashion director. “The boots speak to the guy who is looking for the perfect balance of style and swagger. They are ruggedly authentic with the patina of a perfectly worn-in pair of jeans.”