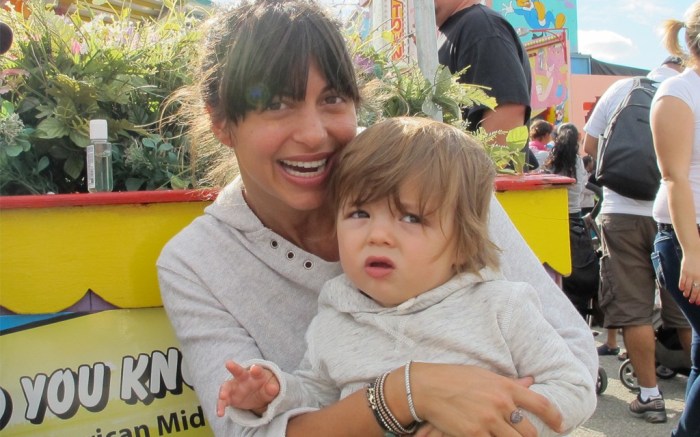 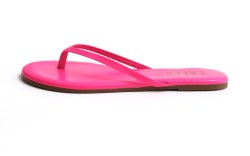 Tkees Creative Director Carly Burnett goes after what she wants in life. And in 2009, her quest for the perfect nude sandal led to the launch of Tkees, known for its cosmetics-inspired flip-flops in a full spectrum of colors.

“I was on the lookout for something simple that disappeared on the foot,” Burnett said. After nine months of research alongside her husband and business partner, Jesse, Burnett created the brand with the original Foundation nude-colored flip-flop.

The Toronto-born designer calls herself a “beach girl at heart,” and said passion inspired the brand’s name, a play on beach-ready tiki torches. Still, she considers the Big Apple a second home, as she attended college at the School of Visual Arts before launching her first brand, called Trove (known for graphic T-shirts), also with her husband.

The Burnetts have continued to expand their collection, strategically adding fabrications that support the company’s branding philosophy of “cosmetics for the feet.” The leather thong sandals retail for $48 at retailers including Calypso, Intermix, Shopbop.com and Nordstrom. In addition to the original Foundation shades, Tkees now offers the metallic leather Highlighters hues, patent leather Glosses, matte suede Creams, pop-colored Lipsticks and other options.

For spring ’12, the brand unveiled several more color groups for the sandals, as well as debuting ballet flats and a children’s flip-flop offering. Speaking to Footwear News over pedicures at Eve Spa in New York’s Greenwich Village, Burnett dished on brand strategy, expansion and the power of celebrity.

What is your branding strategy for Tkees?
CB: We thought we were on to something with “cosmetics for the feet.” We wanted to brand [the company] uniquely so people would remember. It’s a wacky concept, but it works. It’s just one silhouette, but if you think of going into Sephora, there are so many possibilities and any of them translate well into a flip-flop.

What can we anticipate for spring ’12?
CB: We have introduced lots of new products for spring, including the 1980s-inspired Zincs [styles] in bright neons, the Waterproof Sunscreen line in patent leathers, and the Blends inspired by eye shadow with an ombre-like finish. [The Blends] are all hand-dyed, so every pair is unique. For kids, we took a mommy-and-me approach, so the exact same styles from the women’s collection are offered in children’s sizes. And we debuted ballerina flats. They are based on the same concept: simple design with a focus on a great fit and a wide spectrum of colors.

Do you plan to expand into other products?
CB: Absolutely. We plan to launch a range of accessories and a men’s collection, as well as extending the ballerinas to kids. But that’s a whole other ball game, so it needs to be the right time. We will pursue the same sort of idea for men: simple styling and easy-to-wear options. We were nervous at first about the seasonal limitations of being a flip-flop brand, but it sells well year-round. We have a good retail base in Florida and are trying to expand in California.

How are you approaching retail now?
CB: We’re trying to continue to get the brand into more-exclusive retail accounts. We’re trying to hit the appropriate demographic and also liven things up by looking into fun collaborations with designers and cosmetic companies.

What would you consider your big break?
CB: When we had a clothing line, after our first celebrity gifting, Jessica Alba turned up wearing [our T-shirt]. On our first celebrity gifting for Tkees, the first shot we saw was Angelina Jolie wearing our flip-flops. Not only that, but she thanked us through her agent and asked for additional colorways. That was two months after our launch, so we imagined it must be a good omen.

How important is celebrity for growing your brand?
CB: It was really important at the beginning. But now, the celebrity following is just part of team Tkees. It’s not helping to build the brand at this stage; it’s more of a fun addition. It certainly can’t hurt. We’re trying to target [celebrities and their kids with the new line].

What do you do when you’re not busy working on designing and expanding Tkees?
CB: I’m mostly with my son, Jensen, who is 15 months old. He’s a boy, so he’s into everything, but he loves music and will dance — or bounce — and clap whenever he hears it. He also loves the iPad. He is mesmerized by it. Honestly, it allows us to get ready in the morning or to go to dinner as a family because he’s totally into it.