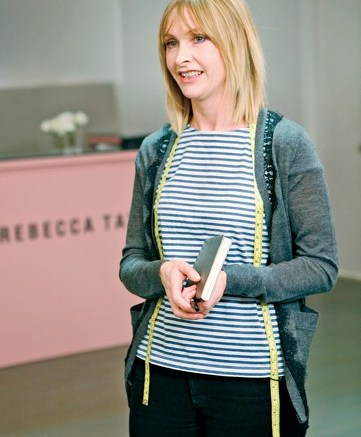 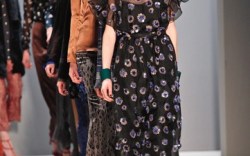 During the first part of the runway challenge, the six contestants gathered at the Rebecca Taylor showroom, where they previewed six looks from the new line and tackled a quick-sketch assignment.

Each student took a number that corresponded with a specific ensemble and then had 10 minutes to draw a shoe to complete their chosen look.

Once the sketches were complete, the contestants met the designer herself, who analyzed each of the shoe styles before choosing Shannon Ramiza as the winner.

“[The designs] all looked so good. It was a tough choice,” Taylor said. “[Shannon] did a great job. The design is quintessential Rebecca Taylor with the ruffles.”

Ramiza, who designed a chunky T-strap (below), screeched when she won. “I was so excited. I put a lot of effort into it,” she said. “It was definitely an exciting challenge. You have to be prepared for everything.” As a prize, Ramiza was allowed to choose the order that the contestants presented in the main judging.

The rest of Challenge No. 1 was then revealed. Each student was asked to create a shoe suitable for Taylor’s fall runway collection. And for inspiration, they were invited to watch her show during New York Fashion Week.

There, they glimpsed additional looks from the line.

Overall, the students were thrilled about Taylor’s involvement in the competition. “It was refreshing to have someone of that profile come in and have respect for what we had to offer,” said Keena Fleming.