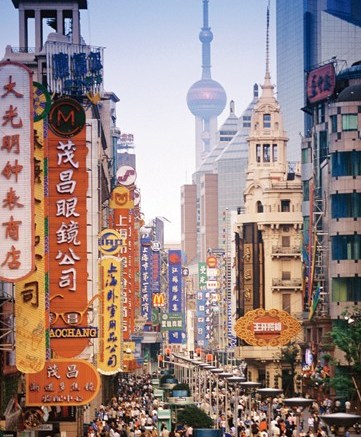 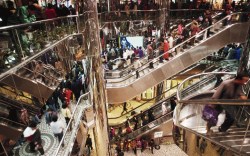 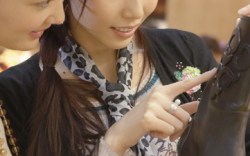 With Chinese consumers continuing to exert their newfound purchasing power, competition among footwear brands is dramatically increasing as the big players battle to stand out.

China today is a much more complicated marketplace than it was a decade ago, with national and international labels fighting for attention, said Merrill Weingrod, president of consulting firm China Strategies. “No international brand is alone in trying to grab market share,” he said. “And Chinese brands are themselves continuing to evolve and get better.”

In the athletic space, for instance, Chinese firms such as Li Ning Co. and Anta Sports Products are second only to U.S. firms Nike and Adidas in terms of sales, according to Weingrod (see chart below for more). Elsewhere in the mid-market segment, “there really aren’t any international brands that compare in sales to the major Chinese fashion brands.”

As such, the main worry for international brands in this environment is how best to get their story out.

With a population of 1.3 billion, China is undoubtedly the largest single market in the world. That means size matters when eking out a retail strategy, and advertising programs need to be large in scope if marketers hope to capture consumer attention.

“It’s difficult to go in with a small budget. Advertising in China costs a lot, and if you want to open one store in Beijing or Shanghai and think someone will walk by and notice it, you’re heavily mistaken,” explained Weingrod. “You don’t have to open 50 stores in a day, but you must carve out a geographic strategy, and like anywhere else, locations [of stores] really matters.”

Take New Balance, which established New Balance China in 2003 and opened its first store in Raffles City mall in Shanghai that year.

As of the end of 2010, New Balance had more than 500 stores in the country. By 2012, it expects China to be its second-largest market with more than 1,000 New Balance branded doors, said Alan Hed, the firm’s international EVP.

New Balance isn’t the only brand staking out a slot for itself.

“There are opportunities for retail growth in China across all city sizes, and we feel very bullish [we are] on our way to doubling our business there by the end of fiscal 2015,” said Nike Inc.’s U.S. media relations director Derek Kent. Indicatively, the firm’s second-quarter futures orders from the region were up by 18 percent, the most of any region.

Meanwhile, Crocs Inc. introduced its brand to China in 2006, and the consumer there now “represents a sizable percentage of our [total] market sales,” said spokesperson Shelley Weibel.

But to tap into China’s growing middle-class, brands need to raise their profile and develop their aspirational appeal.

As Weibel noted, the Chinese middle class often “desires to show their entry into an enviable social and financial class status [by purchasing] an identifiable and admired international brand,” so firms should place “heavy emphasis on understanding and developing product ranges to specifically cater to their respective consumer group’s needs [to maximize this] competitive advantage.”

It’s a strategy that luxury brands, such as Prada and Miu Miu, have already adopted.

According to Sebastian Suhl, COO of the Prada Group, both Prada and Miu Miu make efforts to produce limited-edition merchandise in conjunction with store openings in China, as well as special collections, such as a Chinese New Year leather goods assortment.

Prada’s retail sales in the country are already the group’s highest in the world, growing 73 percent in 2010 while Miu Miu’s skyrocketed nearly six-fold, said Suhl.

In addition, the Chinese make up the biggest single customer group for Prada worldwide, which is why the company has flagships across Shanghai, Beijing, Chengdu, Xi’an, Tianjin, Qingdao, Dalian, Shenyang, Guangzhou and Shenzhen. This year it will enter at least five new cities, including Hangzhou, Harbin, Chang­chun, Chongqing and Nanjing, Suhl added.

In a bid to impress Chinese shoppers, international luxury brands have been staging costly and high-profile events in the cities of Shanghai and Beijing, to show off their wares in creative ways that sometimes involve fusing fashion with art.

In October, luxury leather goods maker Tod’s premiered “An Italian Dream,” a documentary about Milan’s La Scala theater, in Beijing at a former power factory in the 798 art district.

Claudio Castiglioni, Tod’s GM, said the project “was a wonderful way to celebrate our patronage of the arts and [the] made-in-Italy [heritage]. It made a statement not only in China but globally.”

Noting that “it is obvious that [many] major brands are focusing their marketing strategies [in China],” Castiglioni said Tod’s goal is to “create special marketing initiatives that are suitable locally but that have a global sensibility.

“China is one of the most recent global frontiers for luxury brands,” he noted. “The demand for luxury brands in China is a definite indicator that their economy is on the upswing, [but it is still] a relatively new market, with an enormous potential to expand and grow.”

And in April, designer Diane von Furstenberg will mount a retrospective for her eponymous label, called “Journey of a Dress,” chronicling her life in fashion beginning in the 1970s, when the simple wrap dress she designed created a worldwide style sensation. It will also be held at the old factory in the city’s 798 art district.

“All this is really about education,” said Patricia Pao, CEO of Pao Principle, a retail consulting firm.

“The Chinese market didn’t open up until Deng Xiaoping came to power in 1978, so people have had only about 30 years just to get acclimated to [international names]. Luxury goods, especially, are new, and people don’t know the story behind the brands,” Pao added.

Suhl agreed, telling FN it is important to cater to “the Chinese customer [who] is sophisticated, curious and has a voracious appetite for particular and well-designed product.”

Prada also staged a fashion show, which Suhl called part of a “longstanding commitment to strong marketing activities in China and the Asia region,” at the Central Academy of Fine Arts Museum in Beijing two weeks ago, presenting looks that were not only custom designed but were also available for special order in select China and Hong Kong flagship stores the day after the show.

But elaborate marketing approaches are not just the domain of luxury brands.

Even at a mass-market level, New Balance’s Hed said, it is important to tell brand stories “in an emotional and culturally relevant way, through an integrated communications plan that resonates directly with [consumers].”

New Balance is driving sales and brand awareness in China through a series of top-dollar marketing initiatives.

Among them are sponsoring the Jinqiao 8K race that is popular among Shanghai’s young professionals; outfitting participants of China’s “Amazing Race”-type reality show, “Rush China;” and opening two New Balance Experience Stores in Beijing and Shanghai in the past two years.

In the end, companies agreed that China offers one of the largest expansion opportunities of any country today, not least owing to untapped consumer wealth in the numerous cities outside Shanghai and Beijing, which are now considered by some to be saturated, if not mature.

Challenges, however, remain in the size and scope of the market as a whole, which sometimes calls for multiple retail partners to gain access to the right locations and understand the local requirements.

That’s why efforts at brand education will continue to be paramount for international firms, said Hed, because “given the importance of retail in building a brand, you need to dial up the part of your message [that makes clear] what makes you special versus other brands.”