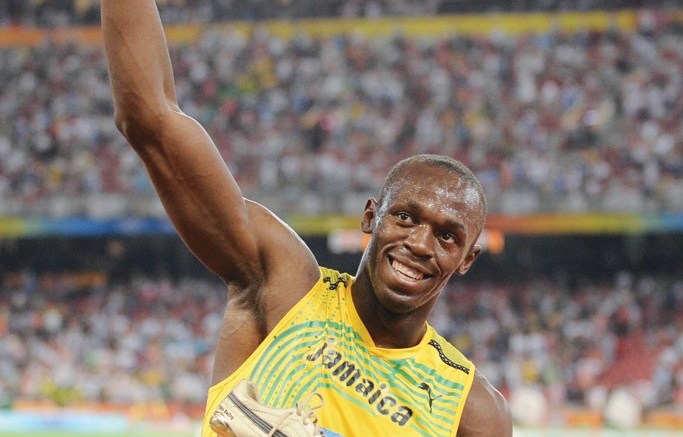 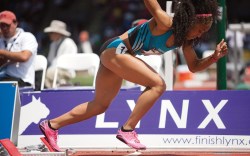 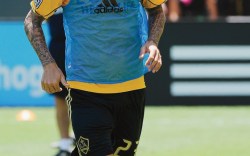 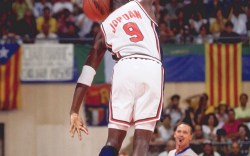 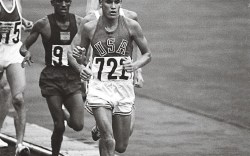 As the countdown begins for the 2012 Olympic Games in London, footwear marketers are devising new plans to turn hard-earned gold into green.

While many big brands scored at the 2008 games in Beijing, London represents even bigger opportunities in a more marketing-friendly city.

“Central London will be full of visitors, and [retailers] should see an uplift in sales,” said Andy Rubin, CEO of Pentland, which owns the Speedo label. He plans to cash in on that brand’s star swimmers Michael Phelps, Ryan Lochte and Nathalie Coughlin.

And Rubin is equally convinced tennis will spur sales for its licensed footwear under the Lacoste and Ellesse labels.

Matt Powell, analyst at SportsOneSource, noted that television exposure — incuding major signage on billboards  and footwear and apparel — is worth the money.

To that end, Adidas is hoping for big things in London. “Every Olympic Games takes on the uniqueness of the hosting country,” said global Olympic director Erica Kerner. “London is a great opportunity for us to raise the bar on our licensing program.”

In addition to being the official licensee of the 2012 Olympics, Adidas has partnered with fashion designer Stella McCartney to oversee the look of all Olympic-licensed apparel for consumers. Kerner expects the partnership to drive traffic in Adidas retail locations, where the products primarily will be sold. The brand has several stores located in high-traffic areas in London such as Covent Garden and Soho.

McCartney also is designing athletic uniforms for the U.K. soccer team, the first time Adidas has had a high-end fashion designer work on an athletic kit for the Olympic Games.

In addition to its big-name British endorsers, including David Beckham, Jessica Ennis and Tom Daley, Adidas expects more than 3,000 athletes to wear its products during the games.

“We’ve got some great athletes who we hope will do very well in London,” Kerner said. “With sports you can never predict ahead of time who will be successful, but with the breadth and depth of the athletes we work with, we hope some of them will be successful in bringing home Olympic gold.”

In contrast to prior games, Kerner said new media will play a bigger role. “The ability to instantaneously have content available, whether it’s social media, digital media or any new media stream, gives us a great creative platform,” she said. “You can take an athlete and, as soon as they win, instantaneously get a marketing message out about it. That’s one thing that will be different about these games.”

Kerner declined to share details about Adidas’ social media strategy, but did note that the brand will unveil new technology platforms next year to facilitate consumer involvement in the marketing campaign.

Although Adidas is the official sportswear partner for the London Olympics, Nike also will be seeking to grab some attention.

The Beaverton, Ore.-based brand is the official sponsor of the U.S. Olympic Committee and will provide the organization with footwear and apparel in London next year, which will almost guarantee the athletic giant significant TV exposure in the States. Nike also should have its own share of star power, as NBA brand endorsers Lebron James, Kobe Bryant and Carmelo Anthony all expressed interest in joining Team USA basketball next year.

To date, Nike has been tight-lipped about its marketing plans for the games, though the label is sure to have a major presence at venues surrounding the event. For the 2008 games, in addition to a comprehensive media strategy, the company also developed specialized products for athletes in nearly every sport.

Smaller rival Under Armour also plans to use London to showcase some of its key athletes, such as Phelps (when he’s away from the pool) and gymnast Alicia Sacramone. “Any time our athletes compete on sport’s biggest stages, it’s a validation of their training and preparation, as well as a validation of our strategic approach,” said spokeswoman Diane Pelkey.

She added that having a presence during the games gives Under Armour a chance to expand its international appeal. “International growth is a priority,” Pelkey said. “We will leverage the Olympics to expand our international footprint.”

In fact, leading up to London, Under Armour will roll out a campaign that focuses on Phelps and other athletes training and preparing for the Olympics.

“There’s already a Jamaican fanbase there, so having Bolt in that market is going to be massive,” McRae said. “We definitely thought Bolt would do some damage [in 2008] and that proved true, so our expectations are much higher as we head into 2012.”

And Puma isn’t the only one predicting Bolt will elevate the brand’s image during the games. In May, SportsPro Media named the sprinter the world’s most marketable athlete, and McRae said Bolt and his home-country’s team will be at the forefront of Puma’s 2012 Olympic marketing strategy.

Puma also has teamed up with fashion designer Cedella Marley, daughter of Jamaican singer Bob Marley. She will serve as a brand ambassador during the games and is designing Puma ready-to-wear products that will hit next summer. Additionally, she is designing uniforms for the Jamaican national track-and-field team.

To build awareness, Puma will launch a program much like the one it debuted a year ago for the World Cup. In 2010, it built a pop-up space in New York called Puma City, which served as a temporary retail and party venue, open to the public for a month. McRae said the brand is re-creating the experience next year, but with an Olympic twist.

“We’re finalizing our plans and evolving how we’ll create [Puma City] for the Olympics,” she said, declining to divulge details. “It is absolutely a critical part of our marketing mix, and we’ll use social media to get the word out.”

Saucony, meanwhile, is preparing to unveil the biggest marketing push in its 100-year history, using the Olympics as a springboard for next year’s consumer outreach campaign.

“It’s like a coming-out party,” said Mark Bossardet, Saucony VP of sports marketing, noting the company will boost its ad spend by at least 50 percent in 2012. “We want to be a global athletic brand through the lens of running. For us, London makes sense given it’ll have a lot of eyeballs on it.”

Since the 2008 Olympics in Beijing, Saucony has built a team of 45 professional runners and will add more between now and January. The brand’s latest endorsers include American hurdler and sprinter Queen Harrison, and 5,000-meter record-holder Molly Huddle.

However, because Saucony won’t have the rights to create track-and-field apparel and footwear for Team USA in London, the pre-Olympic trials this winter will be a crucial moment for the brand to unveil new apparel and shoes, said Bossardet.

“The Olympic trials in Eugene, Ore., are an important part of our strategy because we can start to introduce new products for both on and off the track,” Bossardet said. “When we get to London, we’ll have shoes for our athletes to wear on the track.”

To get consumers involved, Saucony will hold promotional contests with its retail partners, and sponsored athletes will tell their stories through social media.

“We’re going to have our athletes tweet and update their Facebook pages during the games so they can give consumers an inside look at the Olympic Village and [the athlete’s] Olympic experience,” Bossardet said, adding that an integrated social media campaign, which includes a smartphone app, will be implemented in the early part of 2012 and last through the Olympics.

“If we do our job correctly, we can increase our share of views and hopefully garner more impressions than we have in the past by not attending the Olympics,” Bossardet said.

The location of the games offers New Balance an opportunity to highlight its unique strengths, according to integrated marketing manager Josh Rowe. With factories in the U.K., the brand plans to leverage its local manufacturing in its marketing program.

“Since the games are in London, we can tell a great domestic pride story with the fact that we actually make products in the U.K., so it’s an advantage for New Balance,” Rowe said.

He noted that marketing around the Games will be difficult since the International Olympic Committee prevents New Balance and any brand that isn’t an official partner from using the terms “Olympic” or “London 2012” in its ads.

“The IOC does a great job of protecting those brands who spend millions of dollars to sponsor the games,” Rowe said. “We pay very close attention to those rules and try to operate within them.”

Instead, New Balance will focus on other aspects of the Olympic experience.

“We want to tell a training story on what it takes to become an Olympic athlete,” Rowe said. “There’ve been classic examples of Olympic-based campaigns where athletes have fallen short and not qualified, so we want to tell a story about how they prepare themselves mentally and physically for these games and the sacrifices they make. It will be more human-interest stories than Olympic stories.”

Still, SportsOneSource’s Powell said sometimes winning is everything, and in order for marketers to reap the full rewards of an endorsement deal, the athletes need to not only compete but make it to the winner’s circle.

“People who are seen in their celebratory period showing off product, that means a lot to a brand,” he said. “[But you’ve] got to win; you can’t just be an athlete who’s there.”

GOLDEN MOMENTS
When it comes to the Olympics, the spoils do indeed go to the victor — or at least the label that sponsors them. Here, FN picks three moments that created brand buzz.

Usain Bolt, holding up his Pumas in 2008
After setting the world record for the 100-meter race, Bolt held up his gold-decked Puma Theseus II spikes. The race wasn’t just between Bolt’s rivals Asafa Powell and Tyson Gay; it also was between Puma (on Bolt), Nike (on Powell) and Adidas (on Gay). In terms of market value and sales, Puma was trailing its rivals, and this was a victory for the underdog.

Michael Jordan’s Olympic edition of the Air Jordan 7, worn while on the 1992 Dream Team
On a dominating basketball team, which included the  likes of Magic Johnson and Larry Bird, Jordan’s sneakers  were a standout as he donned a red, white and blue version of his signature shoes. Featuring the number nine on the back (representing Jordan’s Dream Team jersey number), the sneaker developed a cult following and has been re-released by the brand twice since 1992.

Billy Mills winning the gold in 1964 after running the 10,000-meter race in a pair of borrowed Adidas track shoes
After passing odds-on favorite Ron Clarke of Australia, Billy Mills unexpectedly set an Olympic record in Tokyo while wearing the Adidas Tokio 64, the brand’s lightest track shoe at the time. He was also the first American to win the 10,000 meter race.