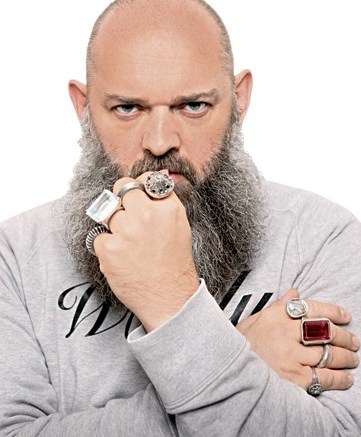 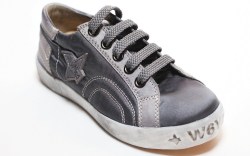 Known for his wild, boundary-pushing fashion statements, Walter Van Beirendonck seems an unlikely star in the kids’ world. But the experimental Belgian designer is making a name for himself with the smallest of consumers.

Since 2004, Van Beirendonck has created a popular children’s apparel collection for Belgian retailer JBC. And in 2009, he was tapped by Italian footwear firm Falc, which manufactures the Naturino line, to design a collection of kids’ and men’s shoes called W6YZ (pronounced “wizz”).

The collection, which retails from $90 to $125, comprises mainly sneakers, detailed with acid-washed colors, distressed effects and bold graphics, including the brand’s distinctive spark logo. Van Beirendonck continues to expand the offering, and for fall ’11, he is developing new silhouettes and incorporating more of his trademark slogans into the shoe designs. In the U.S., W6YZ is sold in Naturino’s flagship stores, as well as in high-end kids’ boutiques, including Shoofly in New York.

Van Beirendonck first came onto the scene in the early 1980s as part of the group of influential Belgian designers known as the Antwerp Six that includes Dries Van Noten, Ann Demeulemeester and Dirk Van Saene. In addition to overseeing his namesake men’s and women’s wear label since 1983, Van Beirendonck’s prolific career has had him dabbling in everything from curating fashion and art exhibits, to creating the costumes for U2’s PopMart tour and even designing a limited-edition Coke can. A passionate educator and mentor, he heads the fashion department at Antwerp’s Royal Academy of Fine Arts, where he is an alumnus.

Here, Van Beirendonck opens up about his creative process and channeling his inner child.

1. What drew you to the partnership with Falc?
WVB: I’ve always loved to design for children. Back in the 1990s, [when I was doing] my W&LT [Wild & Lethal Trash] label, I [partnered] with Oilily on W&LT Bambini for children. And since 2004, I have designed the Zulupapuwa collection for JBC. It’s sold exclusively in Belgium in about 50 JBC shops and has become a huge success. It carries a clear Walter signature, and I’m really proud that it attracts a big audience and that children like it. I also illustrate a series of children’s books with a Belgian publisher. [It’s based on] the Zulupapuwa [themes and characters].

2. How do your well known quirky and theatrical designs translate to the kids’ world?
WVB: The way I tell stories through my collections is really appealing to children. They love my mix of contemporary subjects, like nature, friendships, world awareness and multiculturalism, combined with fantasy characters and elements, such as robots, rockets and space, as well as the bright colors and patterns.

3. Was this your first time designing footwear?
WVB: I actually designed W&LT shoes with Falc back in the 1990s, and I have done a lot of shoe design for my own collections.

4. Do you find shoe designing very different from apparel designing?
WVB: For me, it’s a rather [similar] process. The idea is the most important, and then it builds from there. I do every sketch myself [and] design straight from my heart and rather spontaneously.

5. What’s the meaning behind the collection’s name and spark logo?
WVB: The name comes from the last four letters of the alphabet, starting with W for Walter. X became 6 for the Antwerp Six, and Y stands for young. Z is for zany, crazy. It’s the final letter of the alphabet, but the start of something new. The spark logo represents the spark of an idea.

6. What is the inspiration behind the fall W6YZ collection?
WVB: The contrast between technology and nature is the central theme. I combined raw-cut leather uppers finished with visible stitching, often in natural cotton, with very [futuristic-looking] transparent soles. I also did a group of sneakers with perforated leather. The holes are colored and have a contrasting colored lining under them for an interesting graphic effect.

7. What is it about Antwerp that appeals to you as a designer?
WVB: I like Antwerp as a base to work. It’s central in Europe, and it’s really easy to get information from everywhere and travel anyplace. There is a luxury of living and working there. Antwerp is a village with international allure. And the Antwerp Academy is an amazing place. [Part of the reason] I never left [the city] was because I started teaching in 1985, rather quickly after graduating.

8. Why is teaching and mentoring young designers so important?
WVB: [It] allows me to get into the heads of my students and really stimulate them and push them forward. While I have a huge respect for their own unique signature, I [also encourage them] to push their boundaries in a subtle but decided way. I continue to teach two days a week in the school.

9. Why are so many adult designers now jumping into the kids’ market?
WVB: For a lot of them, it’s easy money. They give a license, and then somebody else designs something in the spirit of their name or brand. Honestly, though, I don’t see many interesting children’s collections being done by most of these designers.

10. What footwear brands do you wear?
WVB: I wear a lot of Bernhard Willhelm, A Bathing Ape, Visvim, some classics from Nike, such as the Air sneakers, and Reebok, like the Pumps. And, of course, W6YZ.