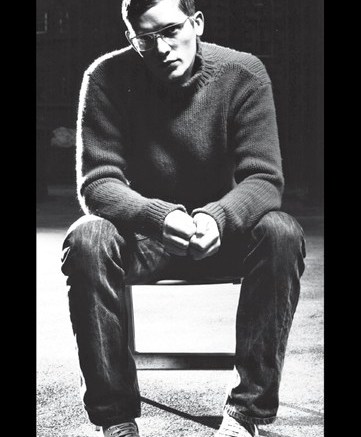 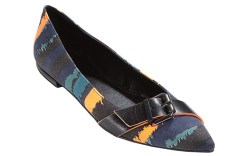 Giles Deacon has turned up the fun at Nine West.

The British apparel designer, who wowed the fashion world when his whimsical and irreverent label debuted in 2004, will bring that same eclectic aesthetic to the masses this fall with a capsule collection of footwear and accessories for the Jones Group-owned brand.

“Nine West is so huge, and it’s a way to hit a whole new customer base,” said Deacon, who was recently tapped as Ungaro’s creative head and has spent time at Louis Vuitton, Bottega Veneta and Gucci. “People may know your name but might not be familiar with [your work].”

The partnership is part of Nine West’s Shoelaboration platform, which launched for spring ’11 with Sophie Theallet and will continue to recruit other prominent designers. “The whole idea is to have someone with a unique way of doing fashion,” said the brand’s creative director, Fred Allard. “Giles is on trend, but he’s not trying to mimic any other designer. He plays with prints and characters and has a totally different vision.”

The collection, which will be sold at Nine West stores and select retailers, includes three footwear styles, an oversized tote and three pieces of jewelry, all priced between $26 and $149.

Deacon also is keeping an eye on the growth of his own line and has plans to launch Giles footwear and handbags by the end of next year. Branded retail may not be far behind, he said.

Here, Deacon shares the perks of collaborating and the difficulty of staying true to his vision.

1. Why did you want to partner with Nine West on a footwear collection?
GD: [Nine West] is a hugely successful global brand, and it has an integrity that works. I’m a big believer in democracy of design and offering people things they can afford. [Consumers want] great design and product for a value from someone who is known for doing high-end, and [a collaboration with] Nine West [can deliver] that.

2. Why is the idea of democratizing fashion so important to you?
GD: There are people who want to spend a lot of money on very expensive bags, shoes and clothing, and, of course, there are people who can’t afford it or don’t want to spend that kind of money. But they still want something beautiful and high quality. People are very savvy and recognize when there’s a designer touch. They want to see the quality and effort when they fork over their hard-earned dollars, whatever the price.

3. What do you hope to gain from the experience?
GD: It’s a great inroad into the U.S. and to get [in touch with] a mass group. It’s a very interesting area for us to experiment with. [The collection] has an edginess and quirkiness that people will recognize from [my] own brand.

4. Do you have a dream collaboration in mind?
GD: I like the idea of Giles for NASA. I’d love to do interiors and great placemats. But seriously, [the next collaboration] is more likely to be denim. We’ve had some meetings with a few brands, and a nice jeans line would make sense for us.

5. How different was it to design footwear compared with apparel?
GD: I approach them with the same ethos, really. I think about the materials — like using printed wools and neoprene — and I play with all those elements to make something new, interesting and saleable. It’s [about] trying to articulate what’s in your brain onto a [shoe or jacket].

6. You’ve worked for some of the world’s largest fashion houses. What lessons have you learned?
GD: Keep strong communication lines open, have a very clear idea of what it is you want, have fun and work hard. But also be nice. It goes a long way, and sometimes people forget that it is so much more fun when everyone is enjoying a project.

7. How has your design philosophy changed as you’ve worked simultaneously with larger companies and your eponymous line?
GD: You become much quicker and more precise about what is right for each individual brand. It’s become very easy for me to jump from my own label to working on Ungaro, [for example]. The problems come when you don’t know what you want.

8. What are the biggest challenges of designing footwear for a mass audience?
GD: Getting value for the money and for the design that’s in [the product]. It needs to be good quality, have the right fashion sensibility and be a special piece. [Consumers] want something from [the Nine West collaboration] that will be a conversation piece, like our clothing.

9. There is a big crop of designers coming out of London right now. Why is the British design scene so hot?
GD: London has always [been] supremely good to designers. [But the industry] has evolved, and designers [now have] very acute business acumen and are much more aware. They want their businesses to work if they are going to put all the effort into it.

10. What keeps you grounded in such a competitive atmosphere?
GD: It has everything to do with your personality. I’ve never really liked that ivory tower design world. I like getting involved in the real world and not being locked away without access to reality. Without being too basic, I just want to make beautiful product that people want.