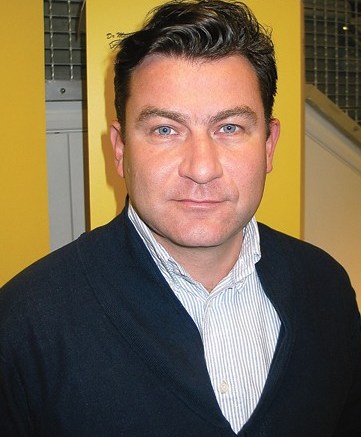 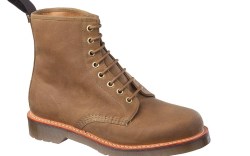 Dr. Martens’ iconic 1460 lace-up boot may have turned 50 last year, but it hasn’t lost any of its youthful appeal.

Newly appointed Creative Director Damien Wilson is working to attract today’s fashionistas by striking a balance between modern and heritage. As a result, the line now features everything from its classic unisex looks to new women’s high heels.

“Dr. Martens has become a destination for the savvy consumer looking for both edgy heritage and fashion-forward footwear,” said Wilson.

To bring even more consumers into the fold, this spring Dr. Martens will launch a companion apparel line for men and women, available exclusively on Drmartens.com, as well as in its own stores in the U.K., Canada and the U.S. “The styles are aimed at the consumer who [wants] product that comes from a British workwear background, but with a modern approach,” said Wilson.

Although Dr. Martens was founded in England, the U.S. remains its largest market. According to Wilson, the country has contributed to the brand’s double-digit growth globally over the past two years.

Here, Wilson talks about maintaining the brand’s appeal across generations and its global footprint.

1. How does Dr. Martens stay current?
DW: It’s constantly being reinvented by [subcultures]. Feedback from customers and the way people wear [the shoes] on the streets influences how we look at [the brand]. More recently, it’s become a fashion phenomenon. [Many] top-level designers have come to us to collaborate on product. Currently, we’re working with Comme des Garçons. Others include Raf Simons and Yohji Yamamoto. We’ve also collaborated with Opening Ceremony in New York on a women’s heel called Diva. And we’re working with A Bathing Ape, an influential Japanese streetwear brand.

2. How does the heritage of the brand impact what you do?
DW: We’re a heritage brand with a vintage look. Our boots and shoes have a very recognizable look that’s important to us and our customers. We have to treat that very sensitively. We might become more refined — thin down the soles or [use] finer leathers — or we may use more rugged leathers or a heavier sole treatment. We reinvent [ourselves] all the time but with the same DNA.

3. What are the challenges in designing for a global brand?
DW: Different countries have different needs. We have enough scope within the range to service our global market. [However], the challenge is keeping the identity true to the original boots.

4. How important is the celebrity connection these days?
DW: We don’t court celebrities, but they’ve always worn our product. It [began] in our earliest days and has helped the brand massively. Pete Townshend wore the 1460 boot on the stage in the early 1970s. He got away from the glam-rock look and [took] more of a utility [approach] that became a fashion statement. Kurt Cobain was a big Dr. Martens [fan]. Recently, in women’s wear, it’s become a staple. People like Chloë Sevigny wear the brand.

5. What kinds of marketing plans have worked best to spread the message?
DW: Dr. Martens has a fan base that likes to share information with each other. Now, it’s often done online. They talk about how they like to wear [the shoes] on blogs and Facebook. [And we have used the Internet] to find out how people are breaking in their Dr. Martens and [found] more than 250,000 [related] posts. But rather than us trying to manipulate [the conversation], it’s more about what the customers are doing with the information themselves.

6. Can the brand’s following of older customers be a turnoff to younger ones?
DW: Dr. Martens has always been involved in youth culture and always will be. Part of it is due to its irreverent, rebellious attitude. The 1460 boot has that connotation. Every generation wears them in their own way. We’re seeing a new generation wearing Dr. Martens boots, coming from both a fashion place and the street level.

7. Is comfort still a major aspect of Dr. Martens today?
DW: It’s not an attribute we necessarily plug or push. It’s something people understand. There are two important things comfort-wise: One is durability — it’s a hard-wearing boot done with our own welting technique — and the second is the unique quality of the air-filled AirWair cushioned outsole.

8. What about sexiness in the women’s line? Is that becoming more important?
DW: British model Agyness Deyn always wears Dr. Martens. You’ll find a lot of modern sexy women in them, possibly with a short dress or skirt with tights or leggings. We’ve noticed a massive growth in the amount of women buying Dr. Martens boots, [and the category makes up] about 40 percent of the business. In addition to the Diva heel [with Opening Ceremony], we’re adding a stiletto boot called the Zeta this fall. It’s a very recognizable Dr. Martens boot from the front, but it has a 4-inch heel.

9. With most of the shoes made in China and Thailand, how is the English-made product different?
DW: Today, U.K.-made product is a niche [business]. We no longer have the same capacity. It’s now a higher price point. We have unique aspects in the U.K. in terms of leathers, but the boots are [constructed] the same as those made [outside England].

10. The Dr. Martens store in New York opened last year. Why is having branded retail important to the company?
DW: It’s a way we can complete the picture and tell the brand story. It will become increasingly important. We can furnish the shops the way we like. In the U.S., the Soho store looks different than the one in Portland, Ore. But at the same time, [customers] understand it’s a Dr. Martens store. When we start to introduce apparel, you’ll be able to see how it works with the footwear.