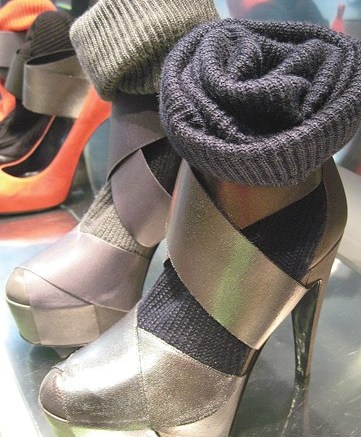 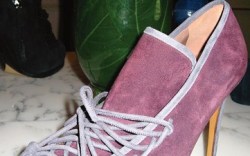 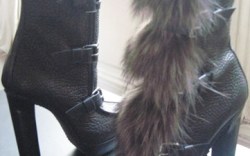 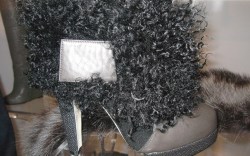 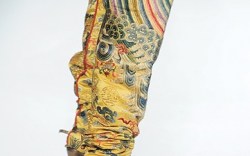 Conversion Factor
Who wouldn’t want two boots in one? Perhaps this was the thinking among Paris designers when they turned out convertible shoe styles for fall. Pierre Hardy experimented with removable fur on several boot styles, including a buckled mid-calf boot with a chunky heel, and a desert boot-inspired wedge ankle boot. These styles will be sold with and without the fur option.

Chrissie Morris also went wild for changeability, when she demonstrated that her goat-hair ankle boot can also be worn hairless, as a clean-cut leather style with a stingray platform and heel. A Velcro strap threads through the hair (also available in fur), giving a luxurious bundled-up effect. “Fur isn’t for everyone, everyday,” said the designer. “So I wanted there to be the option to wear the boot both ways.” Morris also played with magnetized panels of stingray and croc that snap on or off the back of a different ankle boot, allowing the customer to choose one or several options depending on her exotic preferences — and the depth of her pockets.

Meanwhile, Bruno Frisoni and Jean Paul Gaultier added a sock-boot concept to their fall collections, to be worn during the colder months with opened-up styles. Frisoni attached woolly socks to his signature elastic-band sandals and created stretch leather socklets to be worn with sandals in the winter. And Gaultier paired loose over-the-knee sleeves with Asian-inspired embroidery with Geisha wedge sandals for his fall runway show.

Rupert Sanderson unveiled his fall collection in a special space this season: his yet-to-be-opened store in the historical Palais Royal. Other labels, including Pierre Hardy and Stella McCartney, make their home in the area, one of the hottest designer retail destinations in the city. Sanderson’s intimate, two-story space will officially debut in April. The designer also is bowing another high-profile retail spot later this month, in Hong Kong. “Paris and Hong Kong are two of the most important cities in the world for fashion right now,” Sanderson said. “Hong Kong represents a gateway to the long-term future, and Paris roots us in the magic and mystery of fashion’s past.”

Tabitha’s Tips
Already the dimpled darling of the fashion world, Tabitha Simmons is attempting to expand her brand further — although very carefully. Currently sold at Bergdorf Goodman, as well as high-end boutiques including The Webster, Ikram and Maxfield, Simmons told Footwear News she wants to nurture her burgeoning brand without growing too large. “Some people say I’ve started at the worst time,” she said in her Paris show space at the Meurice. “But I actually don’t think it was the worst time after all. An opportunity was created for the best quality and best comfort, and we have focused on both. We’ve been told our customers who bought the winter collection came back and wanted the summer styles because they found them comfortable.”

As for how important comfort is to Simmons, she said, “I’ve been there where I’ve had to take off my shoes because I couldn’t walk another step. As an editor, I would see something so extreme and want to photograph it. Now I’ve had to think, ‘What do I want to wear,’ instead of ‘What do I want to photograph.’” And what is this stylist-cum-designer looking for? “I wanted to design styles you could wear for many seasons, so I tried to keep a timelessness to them,” she said. Highlights of the fall collection include pony-hair wedge mid-calf boots, green velvet lace-front ankle boots and plum suede corset booties.