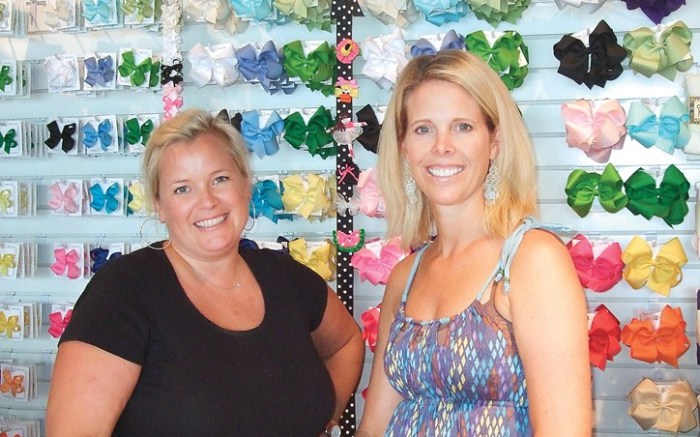 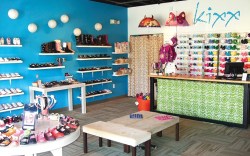 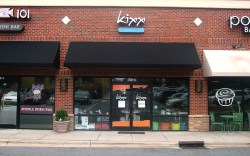 The friends and former stay-at-home moms opened their Charlotte, N.C., store in 2008 to create a unique shopping experience for moms and kids. “Being parents, we know how it feels to walk into a store with all your kids and be judged,” said Kennedy (near right with Meeks). “We wanted to have a place where kids can just be kids, because moms stress [about that].”

Kixx is a virtual playground for any brood, and in between shoe fittings, Kennedy and Meeks encourage children to play with everything. “We have a big bucket of Legos, puppets, puzzles, a TV, and sometimes we’ll play a movie,” Kennedy said. “We let kids take shoes off the wall — we’re really laid-back.”

While parents praise the store for its refreshingly relaxed vibe, the best flattery comes from the store’s core customers. “Kids come in not wanting to be there, and it’s the biggest compliment when they don’t want to leave the store,” Kennedy said.

THE RIGHT MIX
Kixx sells a range of shoes for boys and girls for all occasions.

Outside of footwear, Kixx offers Kidorable rainwear, including raincoats, backpacks and umbrellas, as well as sunglasses and Jibbitz charms for Crocs. However, Kennedy said, the most popular accessory is the vast collection of bows.

“We’re from the South, where moms always want to put bows in their daughters’ hair, and it’s frustrating when you don’t have a bow to match,” Kennedy said. “We have bows in five sizes in every color of the rainbow.”

SERVICE ISSUES
When the store first opened, Kennedy and Meeks hired Jim Burnham, a longtime children’s shoe retailer, to train them and the store’s five sales associates to correctly fit shoes. (Burnham owned seven Stride Rite stores in Florida and has since opened his own consulting business.) Kixx carries hard-to-find narrow, wide and extra-wide shoes to ensure that every child can get the perfect fit.

“We never let someone leave with a shoe that doesn’t fit perfectly, unless they have insisted,” Kennedy said. “Some moms occasionally want a shoe that’s too big, but we never argue because moms know best.”

And at the end of every visit, everyone gets a lollipop.


PROMOTIONAL STRATEGIES
Kennedy and Meeks originally bought a distribution list and sent out postcards to potential customers to announce their opening, but now they feel advertising isn’t necessary. “We get a lot of business through word of mouth,” Kennedy said. “People come in and say, ‘My friend said I had to check you out.’”

Features in local magazines — as well as a Facebook page — have also helped. The store was named Best Kids’ Shoe Store in 2009 by Charlotte Magazine.

In addition, promotions frequently pull in shoppers. Shoes are marked down when the stock is low, so something is always discounted in the store. Kixx also holds a semiannual “buy one, get one half-off” sale, a semiannual half-off sale and a big back-to-school event in August.

“For the August sale, you get $5 off the first pair, $7 off the second pair, $9 off the third pair and so on for as many pairs as you want,” Kennedy said. “It’s great for moms who need to buy shoes for all their kids.”

Another major selling point, added Kennedy, is a program called Shoes on Approval. “A lot of times moms don’t want to shop with their kids, so we’ll take their credit card numbers and let them take as many pairs of shoes as they want,” Kennedy said. “We won’t charge them until they decide what they want to keep.”

BY DESIGN
Kennedy came up with the name of the store when she heard Sara Blakely, the creator of Spanx, say that businesses do better when their names end with the letter X. Kennedy and Meeks designed the logo and put the store together in two months with $10,000.

FACING CHALLENGES
Sales have grown each season, and Kixx is on track to make a profit in 2011, Kennedy said. Opening a small store during a bad economy has been difficult, she said, but Burnham helped put the store on a good path when it opened.

“Our consultant came from Florida and he had owned shoe stores, so he helped us organize,” Kennedy said. “The biggest problem with a retail store is keeping your inventory under control.”

Maintaining customer loyalty can also be challenging. “In this type of economy, people are looking for a deal and they are going to go where the deal is,” she said. “We might not be able to sell a shoe for the price that Nord­strom does, but we hope our customers want to stay with us.”


FEEDBACK
Rudy Glocker, head of sales for Pediped, said the team at Kixx Shoes creates a loyal customer. “They have a really experienced staff that has an interest in making sure the child gets the right fit,” he said. “It translates into great customer service.”

Other brands value the owners’ perspectives when it comes to buying. “They are different because they often buy what they would want, so their store is fun and colorful,” said Brandon Gingerich, director of sales for Badorf Shoe Co., which distributes Tsukihoshi. “As moms with kids, [Kennedy and Meeks] are trying to think like the consumer. [As a result], their store is not set up like most functional shoe retailers. It’s fun and interactive.”

THE CHARLOTTE SCENE
Neighborhood vibe: Located in Charlotte’s Richmond Plaza, Kixx Shoes sits in an older, high-income area. “Our strip mall is mom- and kid-friendly. It has a cupcake store, a yoga studio, a fabric store and a deli,” Kennedy said.

Customer base: The store attracts mostly moms, though some dads and grandmothers come in occasionally, too.

Competition: Kixx Shoes’ major competitor is Nordstrom at the nearby mall.