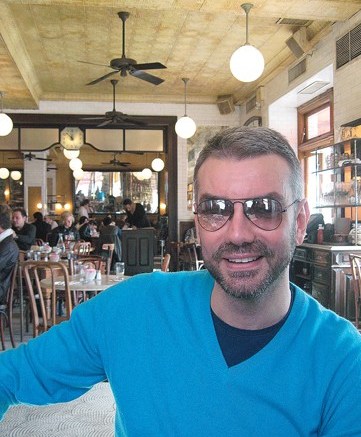 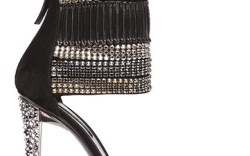 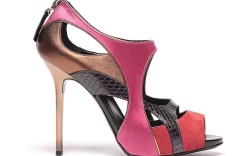 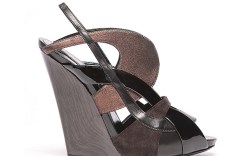 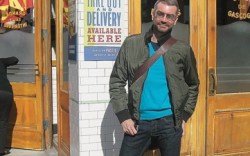 I walk into Pastis in New York’s Meatpacking district on a sunny March morning for breakfast with Italian designer Diego Dolcini, who has made a quick trip stateside and happily agreed to meet up. Diego is on a whirlwind tour, spending only three days in New York before jetting to California for trunk shows at Neiman Marcus in San Francisco and Neiman and Saks Fifth Avenue in Beverly Hills.

With cappuccinos in hand, (or a caffè Americano in Diego’s case), we talk about Diego’s native Naples, his hectic life in Bologna and how he came to design so many collections at once. Diego explains he began working for his former teacher, Gianfranco Ferré, in 1989, an important time for the designer, who was doing his first show for Dior. Diego also consulted for other labels before launching his own footwear collection in 1994, when he won a design award from Vogue that allowed him to show at Premiere Classe. “By 1998 or 1999, I was quite famous,” chuckles the designer. “My shoes were on the cover of Harper’s Bazaar with Courtney Love, on Julia Roberts on the red carpet. Then I got a phone call from Tom Ford, saying, ‘All my friends in Los Angeles are using your shoes. I want you to work with me [at Gucci].’”

Taking that job required a hiatus from Diego’s eponymous line, but the designer is fond of his four years (2001-2004) at the Italian mega-brand. “We had the possibility to do everything. Gucci was a unique brand with a strong image. It was extraordinary in that time,” says the designer. “Tom gave us a lot of creative freedom as he cultivated designers.” Diego, who was the design director for men’s and women’s footwear, worked alongside four other design directors, most notably Frida Giannini, then handbags director, and Alessandra Facchinetti.

After PPR took over a majority share of Gucci, Diego recounts, “the company changed everything, and it was the right time for me to decide, ‘what is my next story?’” Post-Gucci, he spent one year at Dolce & Gabbana before relaunching his namesake collection.

For fall ’10, the designer says he is “looking for something different. The market is completely different. Before, everyone knew me for diamond sandals and skinny, dangerous heels. … Ten years ago, everyone was doing heavy heels and rubber soles. Then there was an eight-page spread in Vogue shot by Mario Testino with Karen Mulder wearing my stiletto sandal with Swarovski crystals. Now everyone does this kind of shoe, but it was my spirit in that time. I was young, in a dream.” The designer still enjoys a special relationship with Swarovski, who recently named a particular crystal after him.

As for his branding philosophy, Diego says, “If you want to be successful in shoes, the collection must have a strong identity and the shoes must tell a story on their own. Whether it’s the construction or the upper, something must distinguish the collection.” Diego’s line, which retails for $500 to $800 depending on the materials, is intended to be one-of-a-kind. “My collection is very complicated, with precious materials and a refined quality. But even the $1,400 spring shoe sold out at Saks in a week. When something is special, people will pay for it.”

The designer asks himself, “What is my next step? Maybe the vision is more architectural silhouettes and new constructions. Everyone is doing the pump, but Louboutin is the king of the pump. We need something different. I would like to do that. I will try. People want quality — real quality, not just the word. As for my competitors, I respect the work, the strategy and the market. Everyone wants a good price and quality, but it’s impossible to do everything at once.”

But Diego does seem to juggle many projects at once. After five years designing Scholl by Diego Dolcini and consulting for Casadei, he also began working for Trussardi 1911 two years ago and added Emilio Pucci to the roster last year. Diego describes Scholl, which is sold internationally (except in the U.S.), as “more than just clogs. I help them to reinterpret their concept and give a new vision for the line.” When I ask Diego how he balances his own collection with his work for other designers, he responds, “It is not difficult. With Peter Dundas at Pucci or Milan Vukmirovic at Trussardi, it’s a different challenge — a confrontation of mentality and vision. I am being asked to give my experience, my point of view, in order to support their vision. I respect them a lot.”

And when does this in-demand designer find time to relax? Almost never, apparently. “I’m very focused on my job at this moment,” he says. “I’m concentrating on helping the market to believe in me. We started six months ago [focusing heavily on the U.S.] and we’ve already had a positive reaction. … The American customers have access to everything and want something new, but if they are going to buy your shoes, they want to know your life, your feeling, your mind.”

When he does have the chance to escape, Diego makes his way to Marettimo in Sicily. “You can eat extraordinary things and I spend all my time on a little boat. I’ve been to Thailand, Bali, Mexico, Egypt, Brazil, but this is truly paradise,” he says.