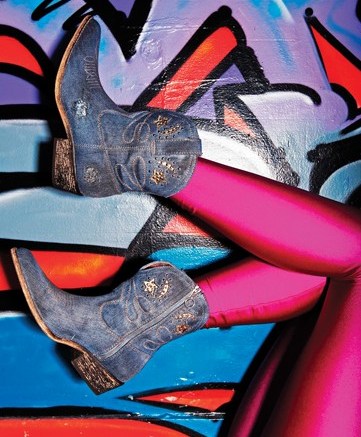 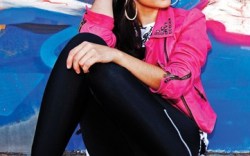 Under the direction of new president Pam Salkovitz, who joined last month, the contemporary women’s brand is debuting several lines, branching out into new categories and expanding its presence in China.

“Our goal is to be the alternative to the leader in this [fast-fashion] market,” said Salkovitz. “This brand is so new, and making sure that we’re in front of our customers is going to take some strategic planning from a marketing standpoint, from a public relations standpoint and in terms of distribution.”

“The official premiere launch of the Grizzleez by Zigi collection was [well] received,” Salkovitz said, adding that the Grizzleez “bears” strolling around the show floor helped fueled excitement about the debut.

Other new initiatives in the works include Zigi New York handbags and jackets, bowing this year, with other categories likely to follow. Also high on the agenda is growing Rock & Candy, a female sneaker line, and 1999, a men’s fashion sneaker collection. Both were added to the portfolio last spring.

According to Zigi founder and CEO Segev Davidson, sneakers will be a tough category to break into, but the company is determined to gain its share of consumers in the space by bringing runway-inspired looks to the sneaker world.

“The most difficult [fight] will be the Rock & Candy line. I know the sneaker business is tough, but with respect to the giant brands out there, the girl interested in fashion is looking for something brandnew, cool, fresh and young.”

“It’s gotten off to a great start,” added John McCann, a member of the product development team. “As sensitive as we are to [the economy], it wasn’t a [factor] in our decision to launch the new brands. A lot of companies in this environment are pulling back and saving money. We’re expanding, spending and adding people. We’re using it as an opportunity to establish ourselves.”

Zigi’s brands are stocked in more than 3,000 doors in the U.S. and China, and the company is working with a partner in the U.K. for distribution in the region. Salkovitz said domestic expansion will include new branded stores in Miami and Los Angeles, in addition to a New York store in Soho.

“We think [opening] retail stores over the next couple of years will help us perfect our craft and provide a testing ground, as well as allow us to react to trends in a fast manner,” said Salkovitz.

New York is home to a new headquarters and showroom, and Salkovitz said the team is actively working to secure another space in Manhattan, which will include a design center.

“We have a design [presence] in Los Angeles, Toronto and China. We really are setting up design offices all over to maximize talent,” she added.

To service its customers as fast as possible, the company plans to move its China-based production operation at the end of the month, to a new facility that is expected to dramatically increase Zigi’s speed-to-market capabilities.

“Building the proper facility and investing the huge amount of money and effort will ensure that our China development, quality control and factory base is ready to support the Zigi growth,” said Davidson. “We have a huge sample room with all the latest facilities, the best Taiwanese management team in the industry and the best development sample team in the world.” Davidson added that the facility also will be an integral part of the “fight” to win the junior customer in the U.S.

Another element in its bid to reach teen shoppers is a new Website, currently in development.

“Our customers live online, and we have to make sure we do something special and different. We’re doing a lot of research [to get it right],” said Salkovitz. The site will eventually feature e-commerce, she added.

Though the economy is still shaky, Salkovitz is confident that the new initiatives will help fuel growth.

“Retailers are definitely buying more conservatively,” she said. “But they’re leaving more open to buy for the freshness, and for us, that’s an opportunity. We might have to adjust our plans slightly, but we’re firmly committed to the success of this brand.”