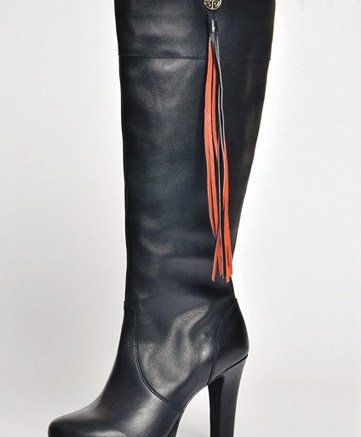 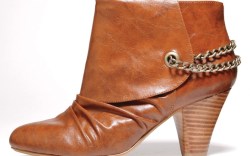 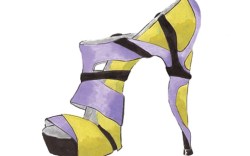 Original Cut
Veteran athletic shoe designer Danny Ho is trading in sneakers for stilettos. The Los Angeles-based designer, who spent 10 years at firms such as Skechers USA Inc. and ACI International, is venturing out on his own for fall ’10 with D.A.O (Define an Original), a collection of fashionable women’s footwear. Inspired by ancient Egyptian art and architecture, the 40-style line features delicate flats, caged-in booties, funky wedges and tall boots with fringe embellishments (at right). Made in China and sourced with Italian leathers, the collection is priced between $55 and $250 and has been picked up by Moxie and The Tannery in Boston and Plaza Too in New York.

Guess What
Guess’ juniors’ concept just got a little bigger. The G by Guess footwear line, which is designed, manufactured and distributed by New York-based Marc Fisher Footwear, is set to make its wholesale debut at FFANY this week. Priced between $39 and $80, the more than 40-style collection includes playful flats in tartan, zipper-embellished heels, ruffled booties and tall boots. The collection, which is already sold at G by Guess stores nationwide, is expected to retail at large department and chain stores.

Go, Girl
After a soft launch for spring ’10, Los Angeles-based Rough Justice is rolling out a full collection of its new juniors’ line, RJ Girl, for fall ’10. The brand grew out of demand from Rough Justice’s retailers, who were looking for a lower-priced, more casual offering. “We wanted to reach more customers, and the only way to do this was to develop a price-aggressive line that will not take away from the creativity of Rough Justice, but enhance it by allowing us to do more,” said Bodo Loerke, a spokesperson for the company. The 60-piece line will retail for $69 to $129 and will encompass flats, tall boots, booties and heels. Targeted retailers include department stores and mid-tier shops such as Journeys, as well as independents.

L.A. Story
Los Angeles-based clothing and shoe designer Yotam Solomon is ready for another challenge. Three years after launching his namesake footwear label, the 22-year-old native of Israel is readying a diffusion collection for fall ’10. The line, Yotam Solomon II, plays with the same ideas behind Solomon’s core offering — highly stylized silhouettes on everything from flats and sky-high heels to wedges and boots — but it will be toned down for a more commercial audience. While the designer’s namesake line is priced between $400 and $1,000, Yotam Solomon II is expected to retail for $150 to $300. Targeted retailers include specialty boutiques already carrying the core collection, including Church Boutique in Los Angeles and Debut in New York.