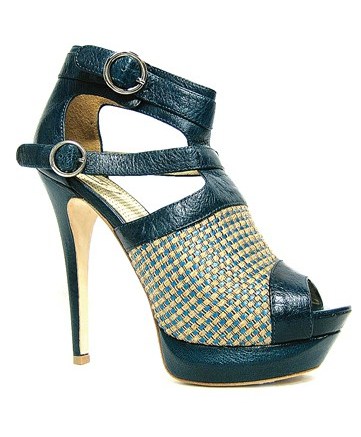 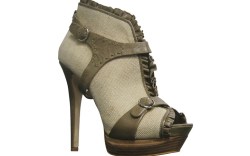 CEO Jeff Yarchever, who co-founded the brand with Joe Ponce in 2008, is seeking to bolster the Velvet Angels account list beyond its boutique base, and also go deeper into the international market and begin building a lifestyle name that could spin out to beauty products and knitwear.

“We have a following now, and we’re growing every season,” said Yarchever, noting that business doubled in 2009 and is on track to be up 70 percent by the year’s end.

Fraser Ross, owner of Kitson in Los Angeles, said the brand’s styling and price points, which range from $110 for flat sandals to $450 for over-the-knee boots, has done well with women looking “for sexy high heels for date night, a job interview or going out to dinner,” he said. “It [also goes well with] the contemporary apparel brands we carry, such as Alice & Olivia and Marc by Marc Jacobs, and a lot of the denim lines.”

For next spring, Yarchever is rolling out Velvet Angels’ largest collection, with such styles as leather thongs and lower kitten heels that will round out the heel-centric offering.

Plans to reach a broader audience also include the fall ’11 launch of sunglasses and the addition of handbags within the next year.

“Women’s shoes is where we started, and we’ll always be true to that, but we’re building a lifestyle brand,” Yarchever said, noting that he eventually would like to branch into lingerie, denim, knitwear and bath and beauty products. “We’re waiting for the economy to stabilize and [to increase] distribution, but it’s just a matter of time.”

More immediately, Yarchever is focused on growing the brand’s domestic account list, which includes about 100 retailers, such as Zappos.com, Kitson and Intermix, and hopes to make a bigger impact abroad. The line is sold in Japan, Australia, Russia and Latvia, but Yarchever said partnering with distributors in parts of Asia, Canada and Western Europe could boost business another 25 percent.

The brand also is increasing its payroll to help it reach more retailers nationwide. Recently, execs hired Rowe Samieian as VP of sales and marketing, and brought in new regional sales reps. Meanwhile co-founder Ponce is no longer working with the brand and has moved on to other projects.

E-commerce, which makes up about 5 percent of the brand’s total business, has played a major role in drawing consumer attention, Yarchever said. Social networking also has been important.

“We have our own blog, Facebook page and Twitter account,” he said, noting that the platforms have provided a forum to promote Velvet Angels sightings on celebrities and on film and TV.

Retailers noted that the marketing tactic has served the brand well as it establishes itself as a player in the contemporary women’s market.

“Velvet Angels is managed by people who understand where their girl is finding the news and how she comes into the know on trends and gossip,” said Jenn Mummert, salon buyer for Zappos.com. “Although they’re fairly new to the industry, they seem to have a great buzz, and it shows through in our increased demand.”