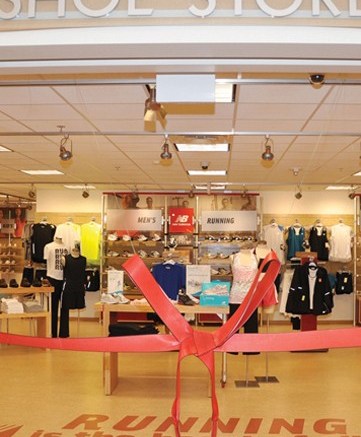 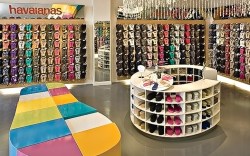 On the heels of its latest retail opening at the Pentagon Concourse in Washington, D.C., New Balance is gearing up to bow another location, in Dedham, Mass. The 3,960-sq.-ft. store, opening Thurday in Dedham, will be the first U.S. location to feature the “Past, Present and Future” concept, which first launched in Asia. “Here in the U.S. we wanted to test it for our licensee business, so we can let them learn from it as well,” said VP of retail Stephanie Smith. “As they open up stores for us, they can consider this concept.” Meanwhile, the brand is playing up its American heritage at the D.C. location (above), which opened to Pentagon employees and visitors last week. The space, which spans 3,600 square feet, has the same design as the independently owned stores, including eco-friendly design elements, such as walls and a cash wrap made of recycled materials and renewable flooring. It carries the brand’s military 993 running shoes and its complete line of performance styles, as well as New Balance apparel and athletic accessories. The Pentagon and Dedham locations mark the first two corporate-owned stores for New Balance. The brand has 150 independent stores and 21 factory stores in North America.

Alejandro Ingelmo will open his first location next month, in his own Soho neighborhood.

“[Having a store] is incredibly important for a shoe designer, and it will benefit my designs in the future,” Ingelmo said. “To see your customer’s reaction to the collection, colors they gravitate toward, comments about comfort and sizing — this is an experience you can’t see on a selling report.”

The vibe of the 800-sq.-ft. Manhattan store is reminiscent of an old cobbler shop, similar to the one Ingelmo’s grandfather owned in Cuba, but with a modern twist. Shoeboxes will line the walls, along with black-and-white photos of the Ingelmo family’s factories and stores (the designer comes from four generations of shoemakers).

His full collection of women’s shoes will be offered, as well as a line of sneakers exclusive to the store. Ingelmo also plans to expand the selection to include handbags and small leather goods sometime next year.

Down the line, the designer said he hopes to open additional doors, in locations such as Los Angeles or Miami.

“Sales have already exceeded our initial projections,” said Afonso Sugiyama, president of parent company Alpargatas USA. “Consumer reaction to the wide assortment of styles has been incredible, and being so close to the pier, the store gets significant foot traffic.”

The 1,250-sq.-ft. shop carries more than 150 styles, as well as a “Make Your Own Havaianas” customization bar, where consumers can mix and match colors, soles, straps and embellishments.

The brand enlisted South American design agency Criacitta to create an interior look that represents the unique and colorful art and design of Brazil. A flip-flop-shaped seat is placed in the middle of the shop, and a chandelier made from mini sandals hangs from the ceiling.

Beyond California, the brand is scouting for potential retail locations in Miami and New York, where it opened a small space at the Limelight Marketplace in May.