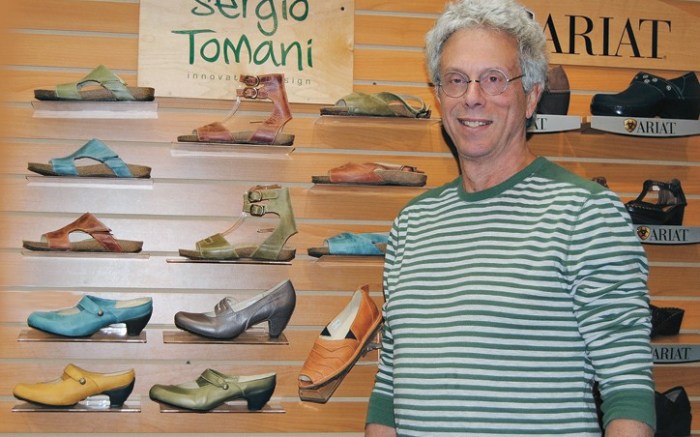 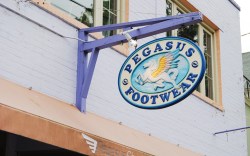 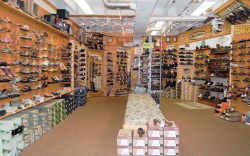 Woodstock, N.Y., might be known for its connection to a famed music festival, but it’s also a great location for selling comfort shoes. The town, an arts-and-crafts colony since the early 1900s, continues to attract free-spirited individuals who want the casual shoe styles offered at shops such as Len Sapiro’s Pegasus Footwear.

After attending a New Age workshop in upstate New York in the late 1980s, the retailer decided to start life anew. At the time, he operated a shoe store in New Brunswick, N.J., under the same name. But in 1988, he closed up shop, packed his bags and relocated. “[Woodstock] has a cool history. It was an arts center and a funky town,” he said. “I wanted to leave the city for a simpler life.”

Today, Pegasus Footwear comprises the 2,600-sq.-ft. location in Woodstock and a 4,000-sq.-ft. sister store in nearby New Paltz, N.Y. Drawing from an equal mix of what Sapiro describes as “leaf peepers” — tourists enjoying the autumn season in the Hudson Valley — and locals, Pegasus’ brick-and-mortar business accounts for 75 percent of sales. The remainder comes from Sapiro’s companion online business, Pegasusshoes.com, which launched in 1999.

Still, he admitted, business has been challenging. In fact, Sapiro said, 2008 was Pegasus’ toughest year yet, though he managed to turn it around fairly quickly. “I was very diligent in watching expenses and sold down my inventory,” said Sapiro about his new tactics. The result: Business is up this year about 5 percent over 2009. “I’d be satisfied if it stays [that way],” he said.

Here, Sapiro talks about the good life in Woodstock and the day-to-day challenges of combating a tough economy.

LS: There’s a plethora of artists, painters and musicians. They appreciate my eye for shoes and what we offer. The rest is mostly women — full-time and weekend residents — and then tourists. We thought in New Paltz we’d draw from the local college and [visiting parents]. We do, but the majority [continues to be] women with the same demographic as in Woodstock: somewhat affluent, between 20 and 70. They want comfort shoes, but they want style.

FN: You’re located in small towns. Is there any serious competition?

LS: There’s not really any in [either location]. There are two or three other stores in Woodstock that sell a smattering of shoes, but we’re the main shoe store. I just did a radio ad, and one of the lines [stated] that people travel an hour to come to our store. Essentially, we’re a destination. In New Paltz, it’s been growing. [Now] it’s equal to Woodstock.

FN: How do you market the stores through the nearby communities?

LS: We advertise in the local paper, The Woodstock Times. We advertise on local radio, on WDST and WKZE, and we advertise online for our Internet business and send out e-mails. We run promotions. I’m involved because I’m a member of the chamber of commerce. Woodstock is always having fall events, and I feel the more people we can bring into town, obviously, it’s better for my business.

FN: How important is the wellness/toning category for your business?

LS: We’ve carried MBT since its inception. We carry FitFlop and have New Balance for fall. MBT was the originator and probably has the best product on the market. However, there’s stiff competition because 10 other companies are out there selling [the shoes] for half the price. [Going forward], we’re going to stay focused. We don’t have the time or energy to expand [the category]. We’re not seeing vast amounts of people coming in looking for it. I think it’s here to stay, but will remain a small segment. And like everything else, five years from now there will be fewer brands doing it because some will realize they couldn’t [compete].


FN: Are the days of multiple-pair purchases over?

LS: It’s up to the person on the floor. Some are good at it, some are not. The better trained [the associates] are, the more they can encourage multiple sales. We have a training process and [guidebook] we’ve developed over the years. A sales associate must read and memorize it. We also have an [independent training] program on our computer called 3point5. Every new employee goes through it. And I [take employees through] my personal shoe school. They come in an hour early, and I go through brands, telling them everything I know.


FN: After three decades in the business, what’s been the biggest challenge?

LS: Finding good help and a staff that will be honest. I [do feel I] have the luxury [of knowing] my staff has the best interests of my store at heart. I go home at night and feel good about that. I know people are locking up and doing the best they can to make this store the best it can be. But we were recently looking for a new sales associate in Woodstock, and I spent nearly $1,000 on ads. I’ve heard there are nearly 1 million unemployed people in the state of New York, and I [had difficulty] finding one person to sell shoes. In reality, it’s hard to make a living [doing this]. Shoe stores notoriously don’t pay enough. I pay better than the average, but it’s retail. It’s hard to make a living unless you’re the manager, whether you’re working for Macy’s or Pegasus.

FN: How has the comfort category evolved over the years?

LS: The biggest change is that comfort shoes have gotten better looking and more appealing. There’s a much bigger choice. Generally speaking, footwear technology over the past 10 or 20 years has skyrocketed — the materials, designs and fit. And there [is now a] focus on proper footbeds.


FN: Do you think the term “comfort” is used too loosely today?

LS: Comfort is different things to different people. For me, I like some cushion and a really good arch support. There are some who don’t want quite [as much] arch support. There are some who can’t wear Birkenstocks, and some who only wear Birkenstock-like shoes. So it’s subjective. [Overall, people] are looking for fit. Our criteria is that when reps bring in shoes, I have somebody on my staff put on a couple of pairs and walk around in them. They say whether they’re really comfortable or not.

FN: Why did you decide to move into online selling?

LS: In 1999, the Internet was just starting up and people were actually selling things online. I thought, “Wouldn’t it be awesome if I could sell an extra two pairs of shoes a day?” We started with Birkenstock and five to 10 other brands, selling two pairs a day [to people] all over the country. It was incredible. And it just grew from there. As I understand it, the top shoe websites soak up [a lot] of the shoe business — Zappos.com, Shoebuy.com, 6pm.com. The remaining [portion] is split between the other 200 or 300 of us. It’s very competitive. An outfit the size of mine can’t compete with the big guys. They take in more money in one day than I do all year.

FN: With two stores and an online business, why did you add wholesale to the mix?

LS: I have a tremendous edge because I’ve been doing this for 30 years. I can go to a booth at a show and tell [vendors] what the best six or eight shoes are. So when I sell Sergio Tomani, I steer [retailers] toward what I believe are going to be the bestsellers. I can talk to them about margins and what I’m going to have in stock. Mostly, I can bring them a retailer’s point of view, as opposed to someone just trying to sell them shoes. The design is done by three or four guys in-house, really talented young people. I tweak the styles a bit for this country. I’ve helped them [infuse] more comfort into the brand.