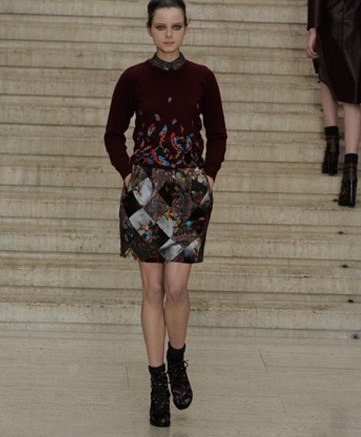 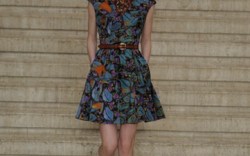 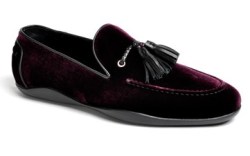 Erdem X Kirkwood
Rising British clothing star Erdem Moralioglu, whose hot-ticket runway shows have attracted heavyweights such as Carine Roitfeld and Suzy Menkies, has paired with Nicholas Kirkwood on footwear this season. Kirkwood took Erdem’s signature prints and added four of them to straight-heeled, hiking-inspired ankle boots that come in burgundy, teal and black leather. “It was very much a collaborative effort,” said Kirkwood. “It was my interpretation of hiking boots, but I kept in mind his aesthetic.”

Duck Feet
Tommy Hilfiger isn’t the only designer focusing on the duck shoe for fall ’10. London-based designer Rae Jones, who unveiled her fall collection at Somerset House (London Fashion Week HQ) made the look more ladylike when she added rubber-ribbed toecaps to elegant styles. This season the designer, who is also working on the new Radley shoe collection produced by Kurt Geiger, will skip Milan and instead take her Portuguese-made collection to Premiere Classe.

Harrys Heats Up
Harrys of London unveiled its fall ’10 collection of Vibram- and leather-soled men’s shoes, including a dressy velvet tasseled style that comes in a choice of either sole type. CEO Giuseppe Bonfiglio said that following the opening of its first Middle Eastern franchise in Kuwait in April, additional plans have been made to roll out stores in 2010. Franchises will open in Qatar, Dubai and China. “The franchise model is watertight, unlike the wholesale model,” said Bonfiglio, adding that business is good in U.S. stores, including Marios and Louis Boston, but that he is reluctant to partner with department stores because of their discounting policies. Next up, the brand will take its new collection to Milan, conducting wholesale appointments at chichi multibrand store 10 Corso Como.

For Goodness Sykes
Sykes has added shoes to the ready-to-wear collection. Designer Jo Sykes collaborated on shoes and bags for the short-lived Italian label Anila and said she’s excited about working on footwear again. “They complete the look,” she said at a presentation at London’s St Martins Lane Hotel on Saturday. The five styles include a shoe and boot based on a cowboy boot-inspired silhouette, including a gold-toe detailing, pony skin and ink suede uppers. The collection will retail at Matches from $770 to $850, where Sykes also designs the multibrand store’s Freda label. The designer will show the collection again at the RMO showroom in Le Marais during Paris Fashion Week.