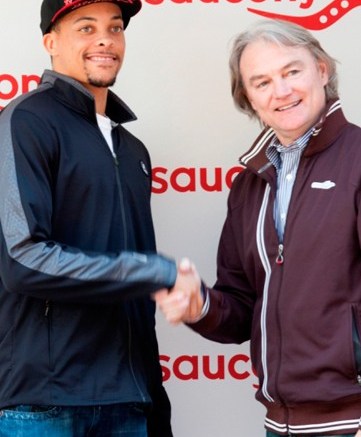 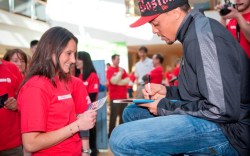 “[Spearmon] is going to be a huge addition to our product team,” Saucony President Richie Woodworth told Footwear News. “He’s sat with designers and engineers multiple times, and he’ll be participating in that process.”

Woodworth also said the Chicago-born sprinter would be involved with promoting the brand’s new Amp Pro compression and recovery apparel line, as well as in classics fashion. And, he added, look for the company to create a line that uses Spearmon’s name. “We’ll put together a co-branded Wallace Spearmon Jr. for Saucony line,” Woodworth said. “We don’t know what form or fashion it will be, but we’ve begun talking about how he can help us develop that and make it commercial.”

The athlete will appear at Saucony events and in Saucony marketing materials, ramping up as the brand prepares a marketing push leading up to the 2012 Olympics in London. The focus will be on grassroots events that don’t interfere with Spearmon’s training, Woodworth said.

Charitable initiatives will also play a major role. Spearmon’s deal included the first award of a biannual $10,000 grant to organizations that work with at-risk youth and get them involved in track and field. The company plans to make the donations through its Run for Good foundation in Spearmon’s name going forward. The first presentation went to Boston-based Youth Enrichment Services.

With Spearmon, Woodworth added, the company will broaden its appeal. “He’s 6-foot-3 and muscular,” he said. “He has a little bit of an attitude. This can transform us, as we develop our relationship with him, to help us get younger, get more male oriented.”