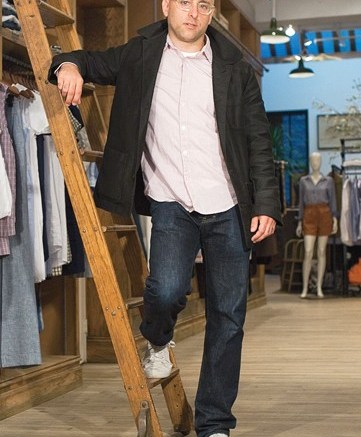 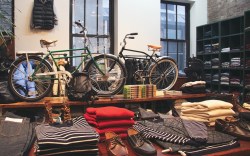 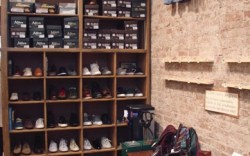 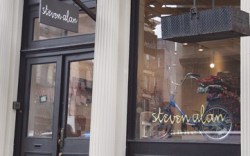 Alan, 43, a New York native, oversees a three-prong mini-empire, which started in 1994 and now includes eight retail stores in New York and Los Angeles, a showroom and the Steven Alan clothing line.

“It’s a hard model to replicate,” said Alan (at left), who studied business in college and also picked up tips from his mother, who owns a jewelry and hat store, and his father, a jewelry designer.

Footwear is an increasing part of the business, with each shop featuring a well-defined shoe selection. At the Tribeca location in Manhattan, opened in 2002, footwear accounts for about 25 percent of sales.

THE RIGHT MIX
As a kid, Alan wore blucher moccasins and admired John Lennon’s Spring Court sneakers on the cover of “Abbey Road.” Today, he carries both in his store.

With a lineup that emphasizes small runs and collaborations, production schedules — not seasons — dictate the mix. Alan’s latest love is white, including an Alden buck and Quoddy’s boat shoe and deck chukka.

When choosing brands, Alan, who works with a buyer, goes for style first and foremost and carries a price range of $60 to $550. “The same person who buys Alden for $550 also buys a $60 sneaker,” Alan said. “[The range] makes the shopping experience more fun.”

SERVICE ISSUES
Alan lets the product do the talking. “I give the customers space,” he said. “It’s better that they not buy anything than have us convince them to buy something they don’t want.” In the long run, he said, that approach creates a more valuable customer.

“We’re informative without being pushy,” said Alan, who employs 60 people, six in Tribeca, with three in the store at a time.

PROMOTIONAL STRATEGIES
Alan’s goal is to make his store a destination since there is not a lot of foot traffic in Tribeca. The best ambassador is the Steven Alan name, thanks to frequent press coverage for the clothing line. The blog on the Steven Alan Website covers everything from a birdhouse Alan spotted to a customer who wears her Steven Alan shirt when she plays with her rock band. The site also features e-commerce, and Steven Alan’s semi-annual sample sales often have lines out the door.

BY DESIGN
Alan took a hands-on role in designing his high-ceilinged, 2,200-sq.-ft. store, making a miniature model so he could move elements around. His goal was to reinvent the general store for today. The look is “weathered and aged,” he said, with antique display cases showing jewelry and watches. Women’s shoes are grouped near the store’s entrance, while men’s occupy a large niche in a corner of the men’s area, about halfway into the store. This winter, Alan plans to renovate and move the men’s shoes to the back wall, so the product is visible to customers as they walk in.

FACING CHALLENGES
In 2008, Alan opened three stores in Los Angeles just before the recession hit. However, he has since held back on expansion. “Things are improving now,” he said, noting that he may open stores again in 2011. “A lot of our customers are bicoastal. They travel a lot, and they overlap with New York.”

But the recession has hurt his smaller vendors, affecting deliveries. “We have to work with designers and make sure we get what we ordered.” And sometimes, what he ordered shows up in the cheaper stores nearby on Broadway or online, at lower prices. “A lot of companies don’t monitor it,” Alan said. “They sell me a shoe for $75 — retail is $160 — and people online sell it at $85. That destroys any retailer who wants to carry it.”

However, he has not lowered price points. “What we carry is not geared toward everyone,” he said. “It’s accessible, yet special.”

FEEDBACK
For Alden, selling at Steven Alan is crucial for reaching younger customers. But on top of that, Alden sales manager Bob Clark found Steven Alan, the person, to be refreshing. “He’s really unassuming,” he said. “He’s more interested in hearing what you have to say than in making pronouncements.”

Ari Langsdorf of the Foundation agency and showroom decided to work with Alan on a Keds special edition for spring ’10 based on an instinct. “You think of classic Americana — a great shirt, jeans, shoes — that’s Steven Alan,” Langsdorf said. “There’s a lot of heat around his brand.”

THE TRIBECA SCENE
Neighborhood vibe: The “triangle below Canal Street” historically was an industrial downtown area, but it has now become an exclusive residential district.

Customer base: Musicians, artists and actors are leading the way for a combination of preppy and hipster consumers.

Competition: A discount shopping strip populates lower Broadway, and Internet-savvy consumers have also found some of the same brands online.