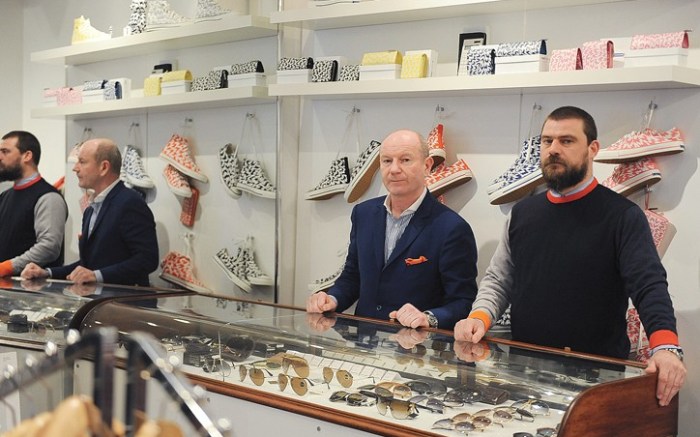 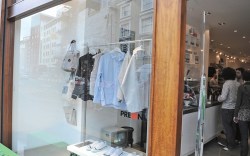 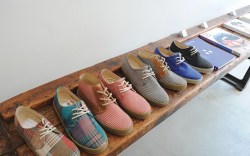 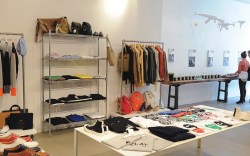 London men’s store Present has become a buzzworthy boutique since its opening last August, thanks to its distinctive point of view and trend-setting selection.

The store is the brainchild of Eddie Prendergast, 50, and Steve Davies, 40, who founded the popular menswear label The Duffer of St. George, which they sold to JD Sports in 2008.

“We make a market and then we move on,” said Prendergast (near right with Davies), noting his belief that focusing too much on any one trend would be a mistake. “We put our energies into research and development and search out would-be classics instead.”

Now the store is appealing to a wide, but plugged-in, demographic, as well as numerous celebrities. Its close proximity to Shoreditch, Brick Lane and the financial district has meant a varied customer profile for Present.

Shoes account for 20 percent of sales, with Trickers being a close partner. Together with the label’s more traditional Goodyear-welted styles, the store also offers an exclusive collection of Trickers shoes and boots featuring white Vibram soles that start from $430.

Sneaker labels include Vans and Alife, along with a colorful Eley Kishimoto print collaboration with Converse. Plans are also in the works to develop branded Present apparel, as well as a sneaker. The offering will be available in-store in September and will be shown for wholesale by appointment.

In addition to shoes and apparel, Present sells magazines, grooming products by Aesop and even coffee.

The sales staff stays well informed about the merchandise, and the store operates seven days a week. And Sundays are never restful at Present, thanks to the nearby one-day markets — Spitalfields, Brick Lane and the flower market in Columbia Road.

The store’s e-commerce site has also become popular. And coverage on blogs and other Websites has been instrumental in expanding the store’s reach in the U.S., Japan and Europe, said Prendergast.

Prendergast envisioned the 1,100-sq.-ft. space without the help of a designer or architect. During his renovation work, he uncovered the original Golden Horn Cigarette Co. store signage out front and decided to keep it there instead of replacing it with a bolder sign announcing Present.

Modeled after a gallery, the store’s display cabinets are on wheels, making them easy to rearrange. The Trickers collection takes center stage on a table, with a sneaker wall on the left and more footwear mixed in with clothing. The shoes will be shown separately starting in September, when a 400-sq.-ft. space downstairs will be converted into a dedicated accessories area.

Prendergast said the poor economy hasn’t created major problems for Present. By the fifth month of business, the retailer was turning a profit (not counting the startup costs).

However, he has noticed one consequence of the downturn: “We’ve had all sorts of companies throwing stuff at us to sell on consignment,” he said, referring to the many vendors who have asked to be carried.

Trickers sales director Roy Martyniak, who also worked with Present’s owners at The Duffer of St. George, said Prendergast and Davies have always been trend starters. “These guys understand fully the nuances of the fashion business,” he said. “They are not the biggest, but they’re the ones who really start things.”

In fact, Present is one of only a few retailers that sells F-Troupe in London. “Between the two of them, they have probably been in business 50 years, so they have a lot of experience,” said F-Troupe owner Mick Hoyle. “A lot of retail has gone stale, and what they’ve done is fresh. It looks and feels really good.”

Scott Emerson will launch his new men’s shoe line, 123 & 124, at Present this fall. “They were the first to import Japanese denim and American sportswear and shell-top sneakers in the early 1990s,” said Emerson, who worked at The Duffer of St. George early in his career. “It’s a pleasure to see that they’re back. I like the local feel, the mix of labels and the way they’re retailing menswear with a personal touch.”