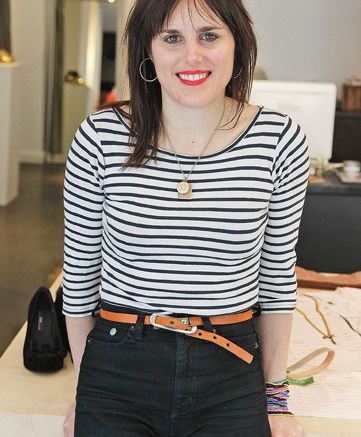 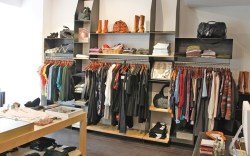 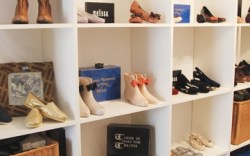 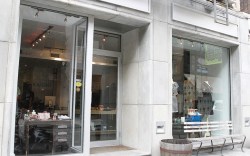 For Kate McGregor, a former journalist, opening an eco-boutique was the culmination of a personal quest to find socially conscious apparel and accessories.

“There was tons of stuff on the Web, but there wasn’t a brick-and-mortar place that met my needs,” she said. “I wanted to create a space like that, and I thought other people might be interested in that, too.”

Relying on what she called “a little bit of everything” — including savings, loans from family and friends and a line of credit — McGregor (at left) opened Kaight on Manhattan’s Lower East Side in August 2006. The 900-sq.-ft. shop sells a range of product, from apparel to jewelry, and footwear makes up 25 percent of sales, up from about 15 percent at the beginning.

“I always wanted something that was very clean, very modern, something that didn’t scream ‘green’ and ‘organic.’ That’s always been a big priority for me,” she said. “I wanted people to come into a beautiful space and see beautiful things.”

THE RIGHT MIX
McGregor said she looks for beauty first when it comes to shoes: “We start with the aesthetic, then [look at] how and where it’s made, then the philosophy of the business, and hopefully all those things match up.”

Price also is key. To get to that sweet spot of $350 to $450 for boots, she has had to make a few changes to her merchandising strategy. She currently carries Brazilian brand Melissa, Toms Shoes, vegan line OlsenHaus and Coclico.

PROMOTIONAL STRATEGIES
Kaight reaches out to shoppers online and through Twitter and Facebook. “It’s hard and time consuming, but we try to be clever and capture our customers’ attention,” McGregor said.

Special events also are an important part of McGregor’s strategy. “We’ve had launch parties for blogs and book and magazine signings,” she said. “My preference is for events that are a little more interactive, so it’s not purely commerce-driven; it’s more about being engaged with a designer and what we’re doing.” A recent line showing with organic brand Loomstate — where the designers hand-stenciled T-shirts — not only provided a spike in sales but brought in new customers, she said.

SERVICE ISSUES
McGregor handles the bulk of the business, although she has an assistant and another part-time salesperson. For all three of them, differentiating between sustainability minded shoppers and casual passersby is vital.

“For our regulars, we try to be aware of what they need and how they shop, letting them know when we have things they might like or special sales and events,” she said. “For the general customer, we try to be as helpful and knowledgeable as possible, but we try to sense their level of interest in [green]. We don’t want to come across as super-dogmatic.”

BY DESIGN
McGregor revamped the unorthodox horseshoe-shaped space last month, converting one section into a shop-in-shop for a rotating group of brands. Melissa started with an installation that went up in early March and will continue through April. “I usually carry eight to 10 Melissa styles, but this will give us the opportunity to showcase the whole collection while [the brand] develops ideas for its own store in the future,” she said.

FACING CHALLENGES
In addition to the general economic malaise at retail (Kaight’s sales, estimated at $500,000, were flat for 2009, with the same projected for 2010), McGregor said the growing number of stores in the green space could present problems in the future. “One of the bigger challenges is that, as this idea [of sustainable retailing] becomes more popular, we’re going to see a lot more competition — and we’ve already seen that in the past couple of years,” she said. Such increases in competition means fighting for the exclusives and designer access that Kaight relies on, but McGregor said the store is trying to stay creative. “We’re working to explore ideas with designers and have some fun.”

FEEDBACK
“[Kaight] is a trendsetter when it comes to eco-friendly shops,” said Michele Levy, CEO of Melissa USA. “It’s one of our most important accounts overall and, by far, the most important in the green community.”

Elizabeth Olsen, founder of New York-based vegan brand OlsenHaus, said both fashion- and eco-conscious consumers shop there. “[Kaight] carries great brands that are already known,” she said. “It has a following.”

THE LOWER EAST SIDE SCENE
Neighborhood vibe: Manhattan’s trendy Lower East Side is home to dozens of restaurants, bars and boutiques, many with an eco or vegan slant.

Customer base: Green-minded women seek out the store, but its modern looks appeal to shoppers seeking affordable but ultra-chic apparel and accessories.

The competition: Vegan shop Moo Shoes and eco-boutique Ekovaruhuset House of Organic are nearby. And while the overlap between the shops can be “a bit of a challenge,” McGregor said that having so many like-minded retailers in the area is also a draw for shoppers.