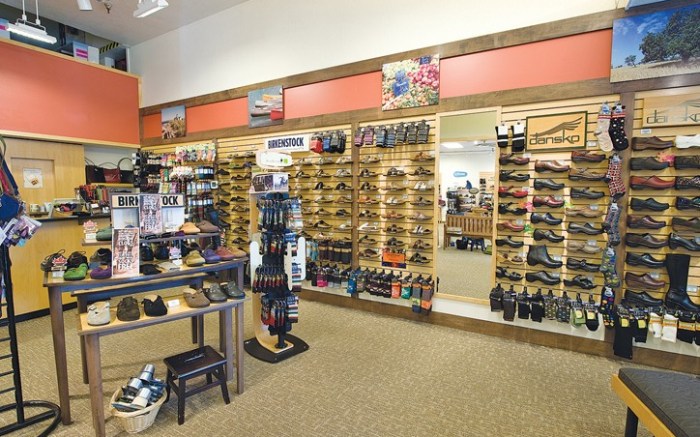 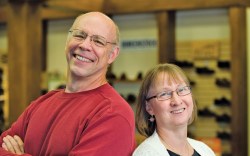 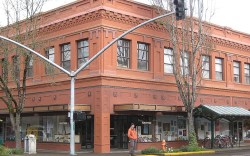 In the Northwest, Birkenstocks are fashion staples and Jimmy Choo is more of a fashion outsider.

Just ask Oregonians and stained-glass artists Dee Mooney and Peter Wendel, who in 1983 purchased Footwise, a small Birkenstock business, from a neighboring orthotist in Corvallis. The two relocated the shoe store to a 14-by-14-foot space adjacent to their studio, allowing them to operate both businesses at the same time. They quickly exceeded their sales goals and in 1985 doubled the size of the store. In addition to shoes, the new space allowed them to offer a Birkenstock repair business, which handles 7,000 repairs a year.

The duo shuttered the glass business in 1991, deciding to focus only on shoe retailing. In 1998, they purchased an existing Birkenstock store in Eugene, followed by the 2003 opening of their own Birkenstock store in Portland. Two more stores bowed in 2006 in Hood River, one focusing on Keen and the other on Birkenstock. (These were later consolidated into one multibrand store, a concept now repeated throughout the four-unit chain and companion Website.)

The Right Mix
With a history of offering Birkenstock, Footwise also sells sister brands Papillio, Alpro and Footprints, as well as Dansko, Naot and Haflinger. Because area residents lead an active lifestyle, the company focuses on comfort as well as performance, with Keen, Chaco and Teva leading the category. “People in the Northwest identify with the [outdoor] opportunities in this area,” said Wendel. “It’s functionality they’re after, as well as comfort.”

Dressier lines include Clarks, Wolky and Josef Seibel. And the retailers are partial to brands with an eco-conscious slant. “We encourage our vendors to offer repairable shoes and make parts available, use minimal packaging and recycled materials,” said Mooney.

Service Issues
Due to requests from tourists and customers who have moved away, Footwise launched Birkenstock Express, a mail-order business with an 800 number, in 1988. “Hundreds of thousands of mail-order customers have requested our catalog,” said Mooney. “Our goal is to have the same relationship with our long-distance customers as we do with walk-ins.” Based on that success, Birkenstockexpress.com was added in 1995, followed by Footwise.com in 1996, offering the full spectrum of brands. Today, the Websites account for 50 percent to 60 percent of sales.

By Design
A soothing color scheme and wood elements give the stores a rich, yet natural atmosphere. At the Corvallis location, the counter is made of reclaimed wood from a 1910 department store that previously occupied the site. After an exterior renovation in 2002, the retailers received a state historical rehab award. And because customers are invited to sip a cup of coffee while shopping, the carpet is made of easily replaceable, neutral-colored tiles.

Promotional Strategies
Footwise participates in Rhapsody in the Vineyard, a bi-annual Corvallis event for local wineries to provide tastings in area stores. The retailer also supports Heart & Sole, donating a percentage of the stores’ profits on the Saturday before Valentine’s Day to a local food bank. “[Traditionally], it’s a really slow month,” said Wendel. “That day, we double other Saturdays.”

The Corvallis store also devotes a window to posting event notices by local community groups and artwork from area talent. “The goodwill we’ve gained from [everyone] is incredible,” said Wendel, adding that the windows also appear on Footwise.com and Facebook. “Facebook is a way of reaching out to people that’s almost become expected,” he said. Added Mooney, “And we can reach out to people but not bombard their e-mails.”

Facing Challenges
The recent downturn in the economy has taught the retailers some valuable lessons. “We’ve gotten smarter about how we run our bottom line,” said Mooney, referring to a slight dip in sales in 2009 over 2008. “We’ve tightened our belts. If someone left, we didn’t always rehire.” And while business is back on track, the Portland location, remains the most challenged. Residents there tend to shop in their neighborhood stores, said Wendel. “Destination stores don’t work in Portland. It’s a green community. People aren’t up to getting in their cars and driving across town [to shop].”

Feedback
“Footwise has been selling Keen since our beginning and is a valued partner,” said the brand’s retail marketing manager Tony Kaplan. “They’re a trusted, go-to destination for comfort footwear in Oregon. Dee and her experienced team inherently understand our product and do a great job of expressing the message in-store and at events.”

Barry Ryan, salesman for El Naturalista, recalled that Footwise was one of the first accounts for the brand when it launched in the U.S., and he praised the retailers for their ability recognize what product works for the outdoor-comfort lifestyle of the Northwest.

Neighborhood vibe: Each Footwise store has embraced its particular location. The Corvallis shop is in a university town.

Customer base: Active women looking for quality footwear, are the store’s core customer base. “It’s not a 20- or 60-year-old, but about lifestyle,” said Mooney.