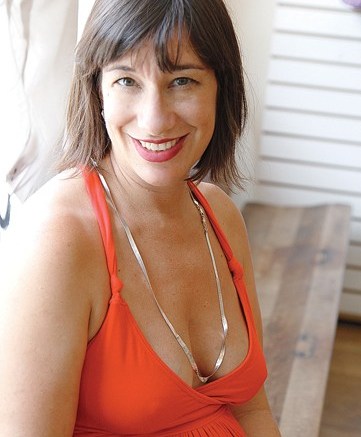 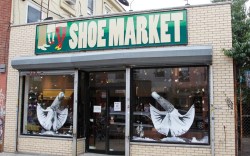 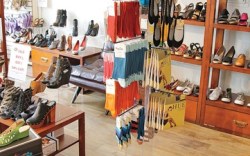 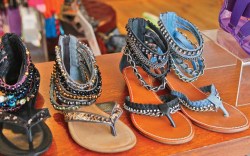 For retailers and friends Dana Schwister and Erika Vala, getting in on the ground floor has been a recipe for success.

The duo opened their Brooklyn, N.Y., clothing and accessories boutique, Mini Mini Market, in the Williamsburg neighborhood in 1999, when the now trendy area was still burgeoning.

”There was nothing really in Williamsburg [at the time], and this old factory had just been converted into apartments, with 16 retail stores on the ground floor,” said Schwister (at right), who attended the Fashion Institute of Technology and has also designed jewelry. “It seemed like a good opportunity — the rent was cheap, the location was good — and we were fortunate to be in the right place at the right time.”

The addition of footwear in 2000 meant big sales for the store, so in 2007, the co-owners decided to open a new shop, Shoe Market, just down the street from the first location. “At that point, the neighborhood was much more built up, and it had become a real shopping and restaurant destination, but there were no shoe stores in the area,” Schwister said.

Three years later, Shoe Market is still the only shoe store in the neighborhood.

Shoe Market caters to the trendy yet casual shopper.

“Our customers walk a lot, and we have a lot of people who ride bikes, so it’s important that with the style comes comfort,” Schwister said.

The store — which is about 50 percent women’s and juniors’ shoes, 30 percent men’s and 20 percent kids’ — stocks Keds, Toms, Sam Edelman, Frye and Havaianas, among others.

Jeffrey Campbell continues to be one of the store’s bestsellers. Schwister and Vala, who have carried the brand since it first launched, have also developed a collaborative relationship with the designer. “Erika had a vintage T-strap sandal with a 2-inch heel that we loved, and he remade it,” Schwister said. “We do an exclusive collaboration with him every season, and so far have done 12 styles.”

Advertising isn’t necessary, said Schwister, who credits the store’s foot traffic to its great location and word of mouth.

The store does occasionally sponsor local plays and events. And it’s active in the social networking community, posting regular updates on Twitter, Facebook and the store’s blog with buzz about new shoes and sales.

Discounts also draw in customers at the end of both the summer and winter seasons, when shoppers can buy one pair of shoes from the entire stock and get one for half off, including items that have already been marked down. Merchandise that is slow to sell usually gets marked down 30 percent, and the last size of a popular style will be reduced 20 percent.

Schwister and Vala originally developed Shoe Market’s look with a designer from the Brooklyn-based furniture store Golden Calf, but they’ve already started giving the store a face-lift. They recently repainted the green walls a neutral color and added a cream-colored stencil design to match a new handmade chandelier. The vinyl wood floor has been restored, and they’ve also moved some of the wooden shelves and replaced oversized leather chairs with long, wooden benches to save space. “We wanted to maintain the old-time feeling of a classic shoe store or department store, but to give it an update,” Schwister said.

Despite the troubled economy, Schwister said sales increased 10 percent last year and are already up 20 percent this year. Still, she admitted, maintaining a fresh look in the store is sometimes difficult. “In retail, you can’t be complacent,” she said. To liven things up, Schwister and Vala try to introduce a new brand each season and add new categories when it makes sense. This fall, the duo will bring in the brand F-Troupe and add more men’s dress shoes.

Ty McBride, brand specialist for Jeffrey Campbell, praised Shoe Market as a retail pioneer in Williamsburg. “[Schwister and Vala] are setting the tone for an entire nation of girls who have that neighborhood look,” he said. “They don’t buy every Jeffrey Campbell shoe; they stick to our vintage-inspired shoes or our feminine, wearable shoes.”

Location is a huge advantage for the store, agreed Tom Slosberg, a VP of sales at Keds. “Shoe Market is a great example of a ‘neighborhood’ shoe store. It is really a fixture in Williamsburg, which is the epicenter of hipster cool,” he said.

Customer base: The store attracts a younger crowd that is between 18 and 40 years old and is looking for moderately priced, comfortable and stylish shoes.

Competition: While Shoe Market is unique in the area, there are small clothing boutiques nearby that stock some shoes. “Wherever you are, there’s always competition, because people can just shop online,” said Schwister.