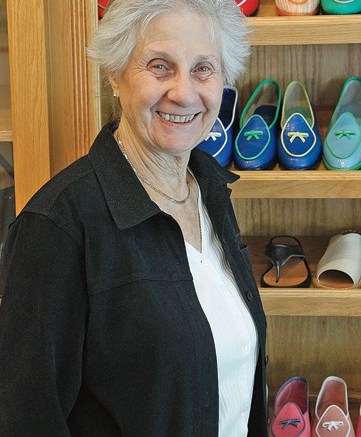 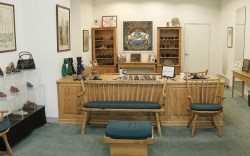 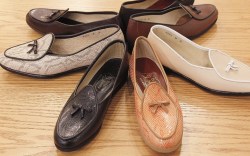 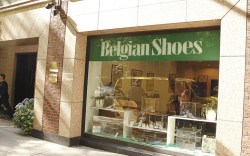 Belgian Shoes is still much the way it was when it opened in 1956.

A creation of Henri Bendel, a nephew of the founder of the landmark specialty store of the same name, Belgian Shoes in Manhattan’s Midtown East neighborhood exclusively brings the made-in-Belgium casual loafers to consumers in the U.S. Bendel received a knighthood from the Belgian government for keeping his production there and thus helping to preserve the native shoe industry. His son, John, inherited the business when he passed away in 1997.

The biggest change in the business happened back in the 1960s, with the addition of a new style and multiple widths. Later fans from fashion designer Isaac Mizrahi to the late artist Andy Warhol have appreciated Belgian Shoes’ under-the-radar chic. And these days, a new generation of fashionable traditionalists keep it alive.

Manager Margaret Cardone, who has worked there since it opened, said, “The fashion business changes. But this is the same product, day in and day out. It never changes.”

The selection at Belgian Shoes is straightforward: There are five styles for men and four for women.

For men, the top seller is Mr. Casual, priced from $350 to $375, a masculine version of the most popular women’s style, the Midinette. Both have slightly pointed silhouettes on soft leather soles and diamond-shaped vamps detailed with piping. A tiny bow (hand-tied by the sole Belgian woman qualified to do it) tops the vamps of both styles.

While women have 150 variations, such as salmon embossed python or pistachio patent, ranging from $295 to $325, men have fewer combinations in stock. They can make special orders, and styles in velvet with customized monograms are also available.

The key to the shoes’ comfort is simple construction and a hand-sewn insole, over a light filling of “piano hair” — similar to the felt that dampens piano keys. “Only women can hand sew the linings,” Cardone said. “Men pull too hard.”

The women work at their homes in the Belgian countryside. They make the shoes inside out, before sending them to a small factory in Izegem, Belgium, for turning and finishing.

When Anne Lyndon Peck of Georgia recently walked into Belgian Shoes for the first time in 10 years, a staff member promptly found her file in the back room. Cardone keeps thousands of customer’s folders, stuffed with receipts from past purchases and notes on preferences. Because of the shoe’s simple structure, sizes run smaller than usual, so in-person fittings are necessary. Customers cannot order directly through the Internet. “Usually, I’m a 7 medium,” said Peck. “In Belgian Shoes, I’m a 5W. It’s part of the ritual.”

For years, Belgian Shoes ran a tiny but memorable ad in The New Yorker — now in The Wall Street Journal — showing a shoemaker’s hand stitching a shoe. Few other marketing efforts are made, and the store holds no sales, instead preferring to give longtime customers rare discounts on discontinued shoes and occasionally donating pairs to local charities. The 40-page catalog is reprinted only when prices change (there hasn’t been a new edition since 2007).

With advancements in technology, the store’s traditional approach is starting to change. The catalog is now on view at the Belgian Shoes Website, and Cardone’s daughter created the store’s first Facebook page in January. “We want more visibility among consumers from 20 to 45 years old,” said salesman Pat Rocchio.

With its dark green carpet and photo of the smiling founder, Belgian Shoes looks more like the living room of a country house than an upscale salon. The store moved to its current address nine years ago, when Cardone filled it with wood furniture, connecting to its rural roots. A stained-glass panel, showing a mustached craftsman, boasts a motto in Flemish about making good products. Watercolors of Belgian scenes hang on the walls.

When felonious financier Bernard Madoff went to prison, Belgian Shoes lost more than a single customer. Not only did he own dozens of pairs, but his fraud, combined with the recession, hit high-end customers hard. Collectors who bought five pairs at a time cut down to one or two. Whether this will change when the economy recovers is still to be determined. “The older customers are gone, and the new ones are more fickle,” said Cardone, who won’t reveal sales figures for the company.

The need for hand labor limits how many shoes can be made, with a few hundred pairs shipped each month. A branch in Palm Beach closed several years ago because the additional sales would not justify the cost of increasing production. The line does not wholesale in the U.S. (one London store recently started carrying the shoes). “This is a destination,” Cardone said. “We ship all over the world, to Hong Kong and Australia.”

George Malkemus, president of Manolo Blahnik USA, is a big fan. “When I can’t be barefoot, I’m wearing Belgian Shoes. They are the symbol of understated elegance,” he said, pointing out that he buys six pairs of Mr. Casual at a time. “I fell in love with these shoes. They’re still a relatively unknown brand, unless you’re a New Yorker.”

Customer base: Executives, upper-income retirees and young dandies-in-training have been drawn to the brand over the decades.