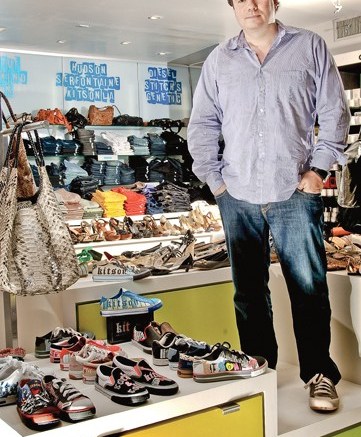 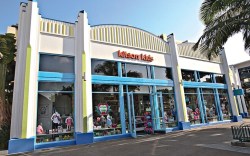 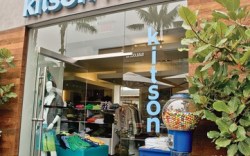 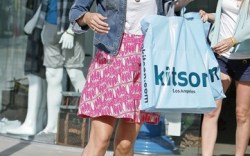 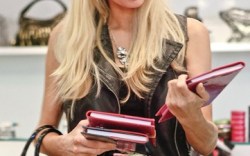 It’s a cool, overcast day in Malibu, just a short jog from the Pacific Ocean, and Kitson owner Fraser Ross, never one to sit still, is methodically straightening Emu boots, jars of pencils, toys and other knickknacks inside his new kids’ store.

Until a few weeks ago, the space had been occupied by Theory. But when the apparel retailer shut its doors, Ross swooped in and opened up shop, directly across from his adults’ location. “There was no overhead to move in and there was no build-out,” he said. “We just moved the inventory a little from every store and opened. There really aren’t too many people taking leases today. [This store] is sort of a pop-up. We have it for the summer. It could be forever. We’ll see.”

Ross has a gift for good timing. Ten years ago, he brought to Los Angeles his innovative retail concept of high-low prices and an eclectic mix of trendy women’s clothes and accessories, jewelry and Hollywood-themed merchandise, right as consumers’ fascination with celebrity culture and L.A. glamour was reaching a fever pitch. Of course, it didn’t hurt that Ross planted his store just steps from the Ivy restaurant, a magnet for celebrities who — with the ever-present paparazzi in tow — soon found their way to Ross’ store and were photographed carrying out the iconic Kitson shopping bag.

A decade later, Ross has grown his business into a mini-empire of 10 Southern California shops, including a dedicated shoe store, men’s and kids’ locations and a new door slated to open next month at the recently renovated Santa Monica Place. Ross also operates a booming e-commerce business and licenses the Kitson name to five retailers in Japan.

All that success has sent Ross looking for a partner, someone to take a majority stake in the business. “I’m not putting a for-sale sign in the window, but I’m talking to a lot of people,” he said. “I don’t know of another company this size that is self-financed at this level. It’s kind of unheard of, and it’s a lot of pressure.” Ross said he would like to lock in a new partner by year’s end.

Regardless of when or if a deal happens, sharing ownership of his company is unlikely to stifle Ross’ unbridled — and sometimes fiery — candor when it comes to the very hands that feed his business: fashion and celebrity culture.

In an exclusive interview with Footwear News, Ross talks about how children’s shoes are adding up to big business, why celebrities aren’t the brand-builders they once were and how Kitson has become a Hollywood icon in its own right.

FN: Business is tough out there right now. What are some of the bright spots?
FR: The kids’ shoe business has been phenomenal for us. There is very little markdown — everything sells. It’s not trendy. And we do it in a unique way: We don’t put anything in boxes; shoes are in bins, they’re all out [on the floor]. The customers help themselves.

FN: Has footwear become a bigger part of Kitson’s business?
FR: In kids’ it has, for sure. It’s a growing business in men’s. In women’s, it’s tough because you’re dealing with a lot of discounting, which is a big problem — Internet discounting, department store discounting. But it’s still a healthy business. [Shoes are] probably 12 percent [of our business overall]. And I can get [that number] up a little higher now that we’re going deep into kids’.

FN: Have you changed your merchandise strategy to help spark sales?
FR: Yes, this year we tried something new. If the shoe is less than $95, we put it on the floor and merchandise it as fast-fashion, as opposed to, here’s a shoe, try it on. Now it’s something special. We let [customers] try those shoes on themselves. It’s increased our shoe business, especially in Malibu. Once they get it on their foot, they’ll usually buy it. Our salespeople [on] commission don’t want to be working for $95 when they could be selling a pair of jeans for $250.

FN: What brands are performing well right now?
FR: Sam Edelman is certainly growing for us. [Sam] has had a lot of celebrity hits, and that has really helped him. Jeffrey Campbell is great, Emu is [strong] in kids’. Ruthie Davis is off to a great start. I hope she’s the next Christian Louboutin because she is so nice and has a passion for the business.

FN: How have shoppers’ buying habits changed in the recession?
FR: The consumer is very price-conscious now. Will it go back? I don’t know. Three years ago, you could charge anything. People are not into overpaying anymore.

FN: How do you balance the fickleness of trends with your relationships with vendors?
FR: It’s tough. You can’t hug your vendors all the time because you might have to let them go. I don’t know why I get a bad rap about letting brands go. Someone once called me the Simon Cowell of retail, and I don’t know if that’s a good thing or a bad thing. We’re in a very emotional business. If it’s not selling, I tell them. And it’s not me, it’s the consumer. We’ll keep [a brand] as long as it generates revenue. But people don’t always take [rejection] the right way. It’s like we’re running a modeling agency where you have to sit down and say, “Maybe you’ve gained a little weight and you need to go.”

FN: Do you find egos an increasing problem in the business?
FR: Oh my god, yes. [Shoe people] are very competitive people, and that can be good because it makes for good business. Success comes very quickly for them [when they’re hot], and egos do get in the way.

FN: Do celebrities still have the same influence they once had?
FR: They can dictate a style of shoe, but not so much a brand. If [a celebrity is] wearing a fringe boot, [the customers] don’t have to buy that exact boot. They are happy to have [a similar] style. The brand is not so important.

FN: Is this a change from a couple of years ago?
FR: Oh, yeah. [Back then] they wanted the brand. Now, it’s the look-for-less thing. People realize it’s the same look. Who cares if it’s not the same brand?

FN: What celebrities are setting the trends?
FR: There is a difference between being a trendsetter and [being someone] who can sell product. There are certain people who, if they have it on, it will sell no matter what. Lady Gaga can be a trendsetter, but she’s so out there that she’s not going to sell product. But visually, she’s certainly a trendsetter. Who can sell product because they wear it? Halle Berry: Anything she wears sells out.

FN: What’s your take on celebrity lines?
FR: We’ll sell them. But [the celebs] have to do appearances and [help us] sell it. That’s the only way it’s going to work. If you want to be a designer, that’s part of a designer’s job. We’re not doing all the work; the risk shouldn’t be all on us.

FN: Is there a celebrity who doesn’t currently make shoes who you think should?
FR: Maybe Lady Gaga if she could make shoes that were more commercial. She understands marketing, and she’s got a fan base like no one else. If she made a high heel that [consumers] could wear out, she could have a huge business.

FN: Does Kitson still live or die by its celebrity connections?
FR: Not anymore. Now, I feel like we’re a brand. It’s not so much about the celebrity anymore. What’s helping us is that we have a store in Malibu, and Malibu is a brand in itself. We have stores in Los Angeles, which is a brand in itself. The word “L.A.” helps sell Kitson like New York helps sell “Sex and the City.”

FN: Do you think Kitson has achieved its own celebrity status?
FR: Kind of. We’re part of pop culture. We’re not serious fashion people. We’re more about bringing Hollywood to Middle America, or to a mainstream audience.

FN: Who is the one person you’d most like to see photographed carrying a Kitson bag?
FR: Today? Right this second? Lindsay Lohan [laughs]. In the future, it would be Michelle Obama coming out of the kids’ store. She has a Lady Di thing going. She’s high-low and just has a great style. But ask me tomorrow, and my answer would probably change.