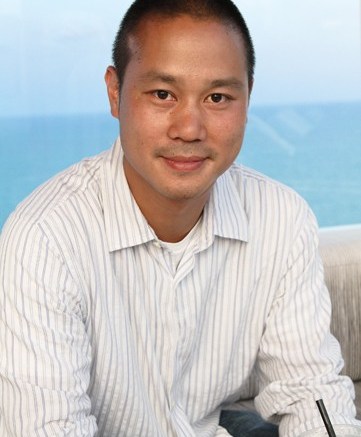 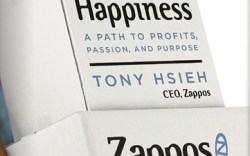 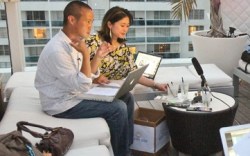 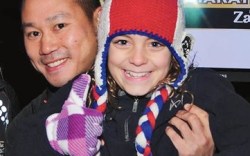 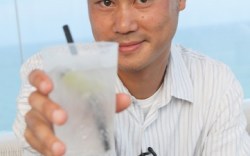 MIAMI BEACH, Fla. — It’s Friday night in South Beach and the party is just getting started at Plunge, the trendy poolside lounge atop the Gansevoort Hotel. As the sun sets and weekend revelers roll in, Tony Hsieh hands out vodka drinks on the makeshift set where he’s about to go live for a “virtual” happy hour.

The early May gathering is part of a weekly series leading up to next week’s debut of the Zappos.com CEO’s first book, “Delivering Happiness: A Path to Profits, Passion and Purpose.”

Hsieh sits down beside Jenn Lim — his “backup brain” and best friend — in front of a bank of laptops they are using to stream the event to thousands of fans logging in at home. Throughout the hour, the pair is joined by several friends who talk about their own pursuits of happiness, as well as surprise visitors, including one from the local zoo.

“Last guest at Happy Hour was … a kangaroo! Yes, we said a kangaroo,” tweets a member of Hsieh’s onsite book team.

The virtual event seems like the perfect marketing strategy for an entrepreneur who has built an online powerhouse and racked up nearly 1.7 million followers on Twitter.

“The happy hours are a way to reach out for the book,” Hsieh said, “but also, we’re just having fun.”

Having fun has always been at the top of the CEO’s agenda, especially at Zappos, where the primary mission is to foster culture and keep employees fulfilled.

“Part of the goal [of the project] is getting the [culture] message out in a more scalable way, beyond Zappos,” Hsieh said in an interview the next day at the Delano Hotel pool, where he was camped out with friends.

Writing a book also had been a lifelong aspiration, much like running a marathon. (He checked that feat off his list a few years ago at the Zappos-sponsored race in Las Vegas.)

But for the the past year, Hsieh has been sprinting.

Last summer, he revealed plans to sell Zappos to Amazon and is now juggling his CEO duties with the new role of author, as well as maintaining an exhausting speaking schedule.

“I’m glad there’s an end in sight,” Hsieh said. “This is definitely not sustainable.”

Hsieh began writing the 272-page book just before Labor Day last year, when he and Lim retreated to Lake Tahoe for a week. By both their accounts, the process turned out to be much different than expected.

“We went to Staples the first day we got there and bought a bunch of paper, a printer, colored index cards and a bunch of stickies — everything you can imagine,” recalled Lim. “But we didn’t end up using any of it.”

“We didn’t really stick to an outline. It was more stream of consciousness,” he said, adding that, after Tahoe, he spent two additional weekends at home writing and editing.

The book, which is divided into three main sections, opens with Hsieh’s account of his first venture — worm farming — at age nine. (It didn’t go quite as planned.) The first pages also give a glimpse into his experience growing up with “typical” Asian-American parents, who pushed him to excel both academically and musically.

Hsieh spent most of his teenage and college years dreaming up new business ideas, including the now-famous pizza venture during which he met Zappos COO/CFO Alfred Lin. Post-Harvard, he landed at Oracle, and shortly after co-founded LinkExchange. After selling that company to Microsoft for $265 million — and becoming a multimillionaire at age 24 — Hsieh realized he was no longer driven by money and left the company. But he wasn’t sure what to do next.

Enter Nick Swinmurn and his idea for an online footwear site. The birth of Zappos has been well documented, but in the book, Hsieh opens up for the first time about the huge hurdles the e-tailer faced during its early years. As the company struggled to survive without adequate funding, Hsieh poured virtually all of his own money into the company.

“The employees who read the book said it was great from a historical perspective,” said Zappos merchandising chief Fred Mossler. “They didn’t realize how much risk was taken, how much sacrifice was made.”

Hsieh admits it was difficult to rewind through certain chapters of his life. “During the depressing parts, I would get depressed,” he said.

Even amid Zappos’ tumultuous beginnings, Hsieh and Mossler, who gave up his career at Nordstrom to join the business, were determined to create a fun atmosphere for their fledgling team. Once the financial burden was lifted and the company moved to bigger digs in Las Vegas, culture became the No. 1 priority.

The remainder of the book charts Zappos’ journey from startup to powerhouse, and Hsieh’s primary, and oft-repeated, message is that if you get culture right, success will follow. He supplements his writing with third-party contributions, mostly from Zappos employees, as well as his own e-mails through the years.

While Hsieh found it relatively easy to put his life on paper, the schedule was grueling.

“We would write for 24 hours and then go nap for an hour,” Hsieh said.

So how did they stay energized?

“We tried coffee. And alcohol. And then coffee and alcohol,” Hsieh laughed. Said Lim, “We actually put coffee beans in a vodka bottle.” But according to Hsieh, Excedrin worked best. “When you don’t have a headache, it gives you a lot of energy.”

In between writing chapters, the friends would take short breaks to entertain visitors, including Lin and his wife, celebrity chef Kerry Simon, and 11-year-old Ava Zech, the daughter of Zappos executive Richard Zech.

Ava and Hsieh had met several years before, and the two became fast friends. (Two days before last November’s half-marathon in Las Vegas, Hsieh asked Ava if she wanted to run with him. She immediately said yes, even though she had never run before.)

A budding entrepreneur, Ava held her first garage sale at age 4, when she tried to sell her mom’s Prada shoes, and more recently launched an organic chicken egg business.

Hsieh said he wanted to include her in the book, but couldn’t figure out the perfect spot. In the end, he decided to dedicate it to her, and surprised her with the news on her 11th birthday earlier this year.

“I was just so happy and honored when I found out,” Ava said. “It’s such a big deal.”

Ava and hundreds of other fans will be on hand to toast Hsieh at the official launch party in New York next Monday. The event also will highlight the “Delivering Happiness” team’s collaboration with Livestrong, Lance Armstrong’s foundation that seeks to improves the lives of people with cancer. Following the party, Hsieh will embark on a cross-country bus promotional tour.

Early reaction to the book has been positive, and it is already getting attention internationally. Hsieh’s dad is even translating it into Chinese for that audience.

While the new author said his goal is to land on the New York Times bestseller list, he doesn’t have expectations beyond that. For now, he simply wants to enjoy the rest of Saturday in Miami by the pool with his friends. The mimosas have been delivered and beers are on tap.

For Tony Hsieh, a happy hour is never long enough.