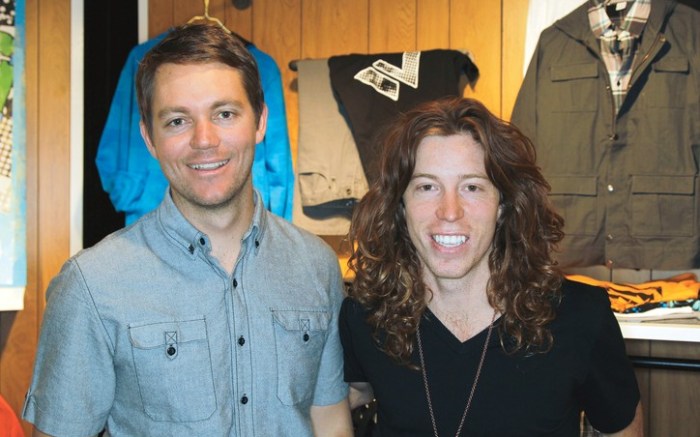 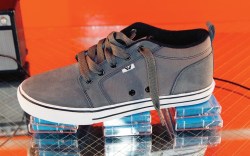 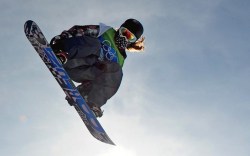 The 23-year-old, who tops the leader boards in both skateboarding and snowboarding, has become the public face of both those worlds, with his own lines of clothing, gear and video games. And after his gold-medal Olympic victory on the men’s halfpipe in Vancouver earlier this year, White is crossing over to the mainstream as a household name.

But sitting in the Target Design Center in Manhattan, the slim athlete, dressed in head-to-toe black with his signature red hair hanging loose, doesn’t seem like a sports icon. When he’s not discussing his many product lines, White is cracking jokes with his brother, Jesse (who acts as his creative director), or chatting with reporters about the merits of stretching before a skate run.

He’s as at home in the licensing world as he is on the slopes and in the skateparks. And with good reason: White signed his first pro sponsorship deal, with Burton, when he was 13, and his burgeoning empire has been expanding ever since. In 2007, for instance, he and Jesse created a limited-edition line of apparel for Target that grew into six offerings per year. And this fall they’re launching a collection of sneakers for men and boys, priced between $28 and $35.

“With the Olympics, things have blown up for me quite a bit, even more than the last time,” said White. “I’m just stoked that it worked out so well and that things are really moving. Obviously, every time we introduce the line we have more and more pieces, so it’s ever growing.”

In a candid conversation with Footwear News, the White brothers reveal the difficulties of designing for skaters and what it’s like to live in the public eye.

FN: What was your goal for the Target footwear?
SW: The idea for the shoes was simple yet technical. There are a lot of things that go on within skateboarding that you wouldn’t assume. You don’t want shoes that are indestructible. That’s the worst thing ever. It’s a mixture of having really simple components, like the way the toe is shaped. If you have a funny shape, it doesn’t skate well. But they’re not too out there; they’re not full-on technical skate shoes.
JW: These are more about a lifestyle than just being skateboarding shoes. That’s the biggest thing with skateboarding — it’s more of a lifestyle. And it’s for everybody, which is the best part because it means our friends can go [to Target] and they can afford this.

FN: What went into designing the shoes?
SW: We’ve never really made shoes before. We’ve had certain deals where we’ve made a one-off or something, but never a line of shoes, especially doing one for a younger audience. And for boys, it’s difficult. I’m a big fan of taking what we like and putting it on the younger generation of kids coming up because I wanted to be wearing what my older brother was wearing. I didn’t want to be wearing the kiddie shoes. I wanted to wear the older shoes. So it’s a cross between the two, which is pretty nice.

FN: The boarding crowd is pretty discerning. Is it tough to create product for them?
JW: Kids today are savvy. We all know they could totally out-brand us right now and label 20 cooler things that we don’t even know about. So our approach to everything was “let’s not dumb this down for kids.” I really want to think about what we want to see and what we want to make. And it’s not silly, happy skateboards. This is real product. Because if you show [something to] a kid and they’re like, “that’s stupid,” then you’re done.
SW: Well, nobody can say it wasn’t skateable because I’m going to be skating in it this whole summer, competing in various events. I wouldn’t put my name on it if I didn’t think it could take it.

FN: What’s it like working with Target?
JW: It’s been a good process. The thing is that we’re being educated as we go along, [and so are they]. But we could’ve shown them whatever we wanted and for the most part, they’ve been fabulous. And that’s what’s nice about the brand. … We have friends in the industry who make shoes — friends over at Nike or wherever — and we’re talking to them about pricing and they’re like, “Are you kidding me? You can get these prices, and you can get it made at this quality?” We’re using the factories that people in our industry are using, and we’re doing it the right way, it’s just with Target.
SW: [And] I don’t think we would’ve been able to do this sort of offering without having previously had this relationship with them. There’s a trust that’s been built up, and we know the people we’re talking to. There are three or four key people we talk to at Target to make sure everything’s in line and going in the right direction. So it’s definitely something that’s been building up over time, and it’s a success because of that.

FN: You’ve been doing licenses and endorsements for a long time. How do you decide which companies to work with?
SW: It’s tough. The biggest thing is that I like the product. I mean, do I like Target? Do I like Red Bull? Those are the simple decisions, and then you go from there. Are they willing to give me control? I have to have the right approval over everything: the ads, marketing campaign, everything. Who am I working with? There’s so much that goes into it.
JW: With all the people we work with, nothing’s quick. We want to be long-term because it’s hard to represent the sport and it’s hard to represent this lifestyle.
SW: But most of the deals we do we’re actually making things with them. With Ubisoft, we make a game. There’s Burton’s [outerwear] line. And at Oakley I have sunglasses and goggles. And each has its own fit. It’s hard because I’ve been getting, as you can imagine, thrown some curveballs and random things and that just doesn’t work.

FN: Is there anything you’d like to make that you haven’t yet?
SW: I’m pretty happy with sticking with the relationships we have and really building them instead of trying to jump around. It’s been eight years with Target, and I signed a 10-year deal with Burton because I love the company. You know I’ve taken a lot of consideration if [I’m signing with] a new sponsor. But nothing new so far.

FN: Do you consider yourself a brand?
SW: No, not in the slightest, but I guess I am. I don’t think of it that way, but it’s pretty cool if you can put your seal on something and instantly give it credibility. We have the best-selling snowboard game of all time. There’s a reason for that. I actually sat in the studio doing the voiceovers, picking out the levels, the characters, the voices for those characters. We went through the script editing. I can’t tell you how many “yeah, bros” and “sweet, dudes” we took out of the script. I think that’s been the coolest. These companies are massive. I mean, [I think it costs] $30 or $40 million to make a video game, and they’re allowing us to be in the driver’s seat. This is what we want.

FN: A lot of athletes, like Tiger Woods and Michael Phelps, have been caught up in scandals lately. Do you feel pressured to maintain a certain image because you are in the public eye?
SW: I honestly think I’m the same person. Obviously, I’m more aware of what’s going on. It’s funny because, if [anyone else] went out and acted wild in public they would end up on Facebook, so [for me] it’s just that on a whole other level. Instead of Facebook, it’s TMZ or something crazy like that. But I don’t really change the way I live to accommodate my image. It’s tough, but it’s how it is these days. There’s nothing I can do about it. And I like the fact that I’m skating and snowboarding, so I can get away with a little more. It’s not golf or swimming. I went to the Vanity Fair party at the Oscars, and it’s a black-tie tuxedo event, and I show up in a leather jacket and American flag pants. The best part was that people were like, “Why would he not be wearing that?” So I’ve actually been having a blast. I’m fortunate enough to have grown up with a bit of success, so now that it’s full-on, I know how to deal with it.