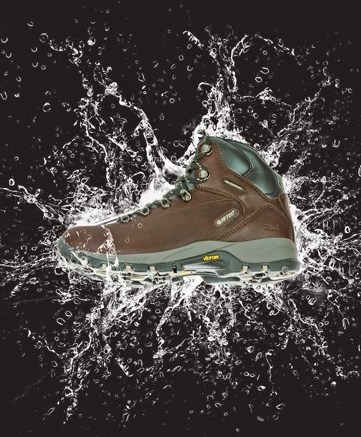 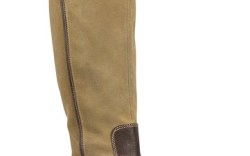 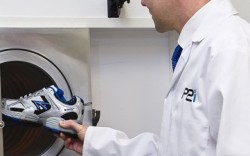 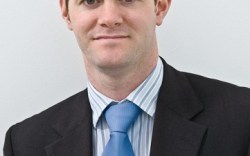 A recent innovation is stretching the limits of what designers can do with waterproof footwear.

U.K.-based company P2i, the brainchild of Dr. Stephen Coulson, developed an “ion masking” technology that, when applied to footwear, can repel liquid. And unlike other companies with technologies that provide similar benefits, P2i claims its process does not change the look or feel of the product, allowing shoes to retain breathability. In fact, P2i’s invisible nano-coating is molecularly bonded to the item, adding only a layer that is one thousand times thinner than a human hair.

Originally used on garments by the U.K. Ministry of Defense, the technology is now regularly applied to footwear, a sector that accounts for 40 percent of P2i’s ion masking business. Coulson said P2i saw great potential in shoes when the company formed in 2004.

“The great thing about footwear is there are so many different materials, seams and sealings used. Unlike with apparel, where the vast percentage is fabric, there’s lots of potential for liquids [to get into] footwear,” Coulson said, adding that his technology allows designers to use any materials for their uppers.

Indeed, performance footwear brands including Ecco, Hi-Tec, Nike and Adidas have all called on the company for the technology. Timberland will use it for the first time in spring ’11, when it adds the mask to 16 styles.

“Ion masking gives Timberland footwear two important properties that our customers are looking for in footwear for the outdoors: protection from the elements and comfort,” said John Healy, invention factory GM at Stratham, N.H.-based Timberland.

Healy said the company has found better results with the ion mask, compared with substitutes, especially when applied to canvas and mesh materials.

Londonderry, N.H.-based Ecco first started using the ion mask in spring ’09 as a way to protect the premium yak leather in its Biom running line. The ion mask was the only option that protected the shoe’s original design materials and maintained the leather’s breathability, said Dan Legor, senior marketing manager at Ecco.

“A clear [one] is that it’s not a rapid process,” Legor said. “It requires separate machinery, and people need to be trained.”

To apply the mask, footwear must sit in a processing machine for three minutes. Footwear brands pay P2i to use the machines, which have been installed in factories around the world (there are 30 machines for footwear in the U.K., Spain, Germany, the Netherlands, Thailand, China, Singapore and Indonesia). Legor said that a single processing machine can accommodate as many as five shoes at once, and the entire ion masking process makes up between 8 percent and 10 percent of the production time.

“It’s a real investment on our part, but it added enough value to our products that we felt [it] was worth [the commitment],” Legor said. Coming up, the technology will be found on the brand’s spring ’11 Biom training and golf products.

P2i’s ion mask was first used on footwear for outdoor and sports brand Hi-Tec. It started out on just the V-Lite Altitude hiking shoe in winter ’08. Now the brand’s fall ’10 line will have 20 styles with the ion mask. But Hi-Tec has also encountered challenges.

“We had some kinks to work out at first with having to ship [the shoes] to the U.K. to be processed [by P2i], but once we got the system a little more streamlined, it wasn’t an issue,” said Hi-Tec Sports public relations manager Dana Panales. She said the added manufacturing cost is anywhere from $15 to $45 per pair due to the additional transit required. Those costs get passed down to the consumer: The retail price of a pair of Altitude hiking boots with the ion mask is $135, compared with $90 without it.

Coulson said that the consumer is willing to pay extra for the treatment, as evidenced by other products on the market. “At the moment, [consumers] are paying a lot more to have a [competing technology such as Gore-Tex] in their shoes,” Coulson said. “The real benefit of the ion mask is that air can flow through, which gives it great positioning well beyond conventional [water repellent] treatments.”

And with P2i owning the worldwide license and 33 intellectual property patents, Coulson said he believes P2i could be poised for even wider success in the future.

“It’s a different positioning, and in that respect, we don’t have any competitors [that offer the same technologies],” Coulson said.

The company is looking to expand beyond outdoor footwear by focusing on different athletic styles such as training and golf shoes. To keep up with added demand, P2i is attempting to be more accessible to shoe manufacturers, especially in Asia, where it has placed a majority of its processing devices.

“We’re working closely with footwear factories in the Far East to deliver the ion mask,” Coulson said. “To keep the pressure on, we’re increasing the amount of processing machines there.”

“The goal is to proliferate through all the footwear brands and make sure we’re on all styles,” Coulson said. “There’s no reason why it shouldn’t be on every pair of shoes.”