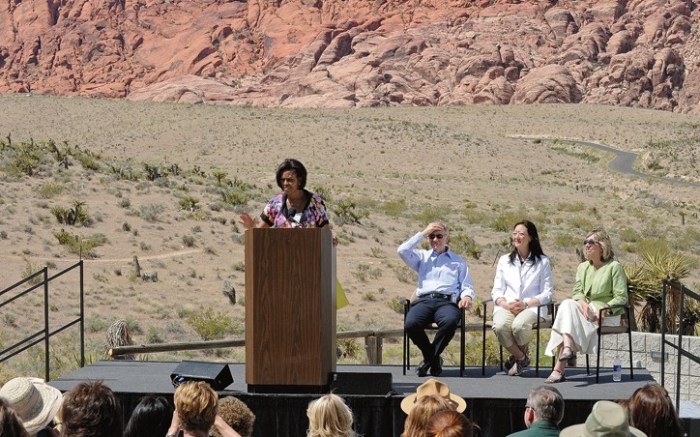 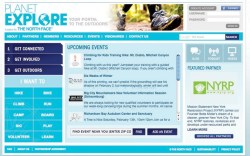 The future looks good for the outdoor industry. Sales are up for the category as a whole, and this week’s Outdoor Retailer show sold out. So why is everyone spooked?

Many vendors and retailers worry that the trend in the U.S. toward an increasingly urban and decreasingly outdoor-oriented population could threaten the future of the $46 billion-a-year outdoor market here. So they’re making a concerted push to re-engage younger consumers.

It’s a quest that’s gotten a big assist from the White House. In April, President Barack Obama kicked off his “America’s Great Outdoors” initiative with a series of forums held across the country to hear American’s ideas about the conservation and use of public lands. And on June 1, the first lady announced the newest component of her campaign to get kids in the U.S. more active: “Let’s Move Outside” encourages children to explore “the parks, trails and waters in all of our communities,” according to the White House’s announcement.

The push couldn’t have come at a better time, said Frank Hugelmeyer, president and CEO of the Outdoor Industry Association.

“There are fewer and fewer kids going outside and playing the way they used to,” Hugelmeyer said. “There are 73 million millennials growing up in the U.S., and on average, they’re spending four to six hours a day in front of some sort of screen. That was not what the America that created this great outdoor movement in the 1960s looked like. We drive a very strong economic engine truly dependent on Americans continuing to get outside.”

The North Face, for one, agreed. In June, the company (along with REI, the Outdoor Foundation and the National Park Service, among others) co-sponsored the first Outdoor Nation, a two-day event that brought together youth delegates from across the country in New York to discuss engaging kids in the outdoors. And the company announced $250,000 in grants for young applicants to use in programs that get their contemporaries outside.

“We need to get the voice of the youth at the table, finding out what’s going to excite them,” said Letitia Webster, director of corporate sustainability at North Face.

As part of the effort, the brand’s Planet Explore website is focusing on making the outdoors accessible. The key, Webster said, is having young people involved in the conversation.

Other companies also are discussing ways to develop kids’ love of the outdoors. “We need to demystify the outdoors,” said Linda Brunzell, director of global marketing at Merrell, which launched its partnership with the National Parks Foundation last year. “[We’re] focused on the family, on finding a mom and a dad who appreciate the outdoors, or who want to reconnect.”

Merrell, a division of Rockford, Mich.-based Wolverine World Wide Inc., has worked to promote and preserve America’s National Park system through the partnership, which has included monetary support, as well as exposure on all the brand’s consumer-facing initiatives. The brand also has featured a national park of the month on Facebook.

Much of the outreach is focused on education, Brunzell said. “If you didn’t grow up in a family that sent you outside, you get into your 20s and you’re intimidated,” she said. “We want people to walk along the trail that’s appropriate for them. We don’t want the outdoors to be exclusive. And that’s what we hammer in. We’re not going to judge if you car camp.”

Making the outdoors less intimidating is also the name of the game at Keen. Linda Tom, marketing manager for the Portland, Ore.-based company, said the brand structures its advertising and philanthropic work around teaching children.

“It’s not first-nature [now] for kids to go outside and play by themselves,” she said. “We want to reconnect kids to the wonderment of the outdoors. It’s not that it’s gone; it’s just that people have started ignoring it a little.”

This year, Keen has ramped up its outreach, running its first kid-focused ad campaign this spring and planning family-oriented marketing and social media programs to launch in late summer/early fall.

Kent, Wash.-based outdoor retailer REI has offered classes and events in its 112 stores for years, all designed to get customers comfortable taking their families into the wild. The retailer has seen growing interest lately, a spokeswoman said. This summer, REI relaunched its Passport to Adventure program with a more robust Web component. Much like before, the site lists kid-appropriate hikes, bike paths and more.

The group effort in the outdoor movement seems to be paying off. “We get tremendous feedback when we focus on the parks,” Merrell’s Brunzell said. “Whenever we talk about national parks — trivia or things like that — on Facebook, it’s always among our most popular posts, and the same with Twitter.”

And many agree that feeding the interest among kids is crucial to the long-term success of the outdoor market. “This is an enthusiast-led industry,” said Brunzell. “And because of that, we all have a concern that [if participation falls], the dollars will go away from supporting public lands. It’s a concern we have on a higher order, and we want to make sure there’s an industry to supply.”