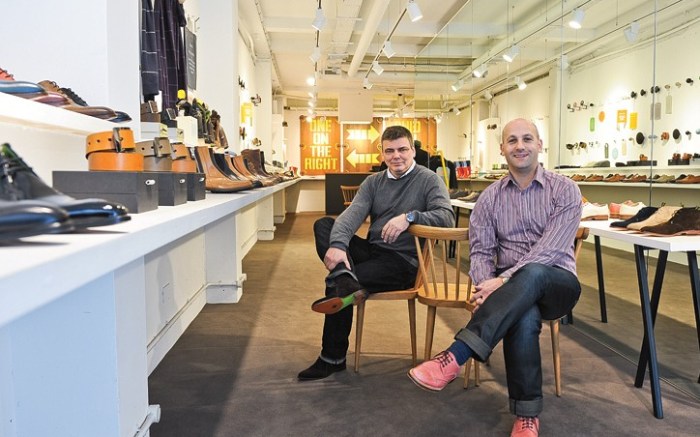 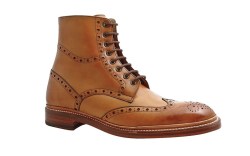 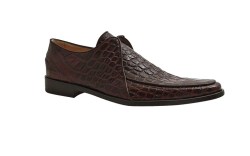 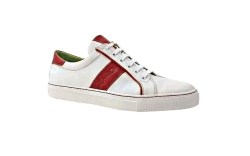 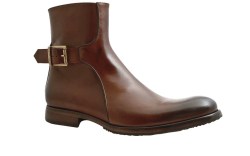 When the founder launched his namesake footwear brand in 1990, he set out to deliver an alternative to the prevailing looks of English shoe stalwarts such as Barker, Grenson and Church’s. He developed an Italian-made collection that featured unusual toe shapes, decorative seaming and punching detailing as well as a well-researched anatomical last. As a wholesale and retail business, the shoes quickly became popular with such megastars as David Beckham, Will Smith and Brad Pitt.

Everything changed four years ago, when 55-year-old Sweeney had a stroke and ceased playing such an active role in the business. Then, in 2009, after attempts to move the brand forward, Oliver Sweeney went into administration (the British equivalent to bankruptcy).

“As an admirer of Oliver Sweeney for almost 20 years, the opportunity to invest in the brand to ensure the success it deserves in the U.K. and around the world was enormously appealing,” said Helfgott. “The potential of this international expansion and the option to introduce new product to strengthen the brand was a huge catalyst for interest and is undoubtedly where we see the first area of focus for the business.”

Minor shareholder Sweeney is still involved in design, however, Cooper and Helfgott bolstered the design team last July, bringing in Joachim Sedelmeier and Mark Walker, who operate their own footwear label Skive, to start with the brand’s spring ’10 collection.

The 50-strong Oliver Sweeney main collection of seamless derbys, suede moccasins and styles with elongated or asymmetrical toe shapes is still made in Italy, but in new factories. Retail prices average from $320 to $457.

“We have focused heavily on retaining and protecting the Oliver Sweeney brand handwriting,” said Cooper. “Going forward, we know that a large proportion of our sales comes from repeat business, and, as such, we are fortunate in having a customer base that we know well and can deliver to.”

Additionally, the brand has introduced a number of options at lower price points. A selection of sneakers, a Goodyear-welted line and the Oliver Sweeney London collection featuring full calf leather linings and Blake constructions all start around $200. A capsule collection of high-tops has also been developed exclusively for Harvey Nichols for spring ’10 and arrives in stores this week. And the brand will unveil a limited-edition World Cup collection, which hits shelves at the end of May.

Cooper said that casual product has enormous opportunity, and the brand is now better able to explore that category. “Within the new business structure we have the factory base to deliver, and interestingly, the casual section of our Website is the most visited,” he said.

The accessories category has also grown. “We’ve tried to move away from accessories that are just leather,” he continued. New fall ’10 items include socks, belts, gloves, hats and scarves as well as stingray Moleskine notebook covers.

The restructuring has been well received by retailers.

“We’re very positive about the changes under the new management,” said Derrick Hoyle, product manager and buyer at shoe chain Sole Trader. “Two years ago we approached Oliver Sweeney to do a diffusion line, so we’re elated that they’ve gone ahead and done it. We have Oliver Sweeney London exclusively until March and sell it in 20 of our stores — many more than we would have been able to with the main line.”

Neil Steptoe, head of men’s buying at Kurt Geiger, said the chain has also bought into the London line, which appeals to a slightly different customer. “The product they offer has always been fairly formal with an eccentric twist, and this has helped them carve out their own niche and build up a loyal following,” said Steptoe, who added that the range will sit within premium departments in Harrods, Selfridges, House of Fraser and Fenwick. “Since Tim Cooper has come on board, the business seems to be moving forward at full speed.”

Cooper has also made changes to Oliver Sweeney in retail. One of the three stand-alone stores (two in London and one in Leeds) relocated from New Bond Street to a 641 square-foot store on Conduit Street, home to top international retail names like Vivienne Westwood and Banana Republic and just around the corner from Savile Row. The store was designed by Urban Salon and displays shoes on a continuous shelf that wraps around the length of the store. Meanwhile, accessories are hung on 169 specially designed hooks. Three more U.K. stores — in London, Manchester and Edinburgh— are planned for this year.

Next, Cooper will visit the U.S. and Far East to explore international expansion. He said, “No British men’s shoe company has ever been able to completely crack the U.S. market.” But he said he’s hoping to do just that.