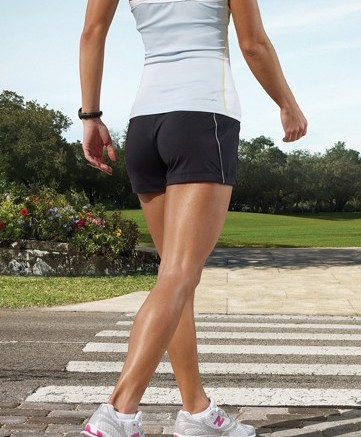 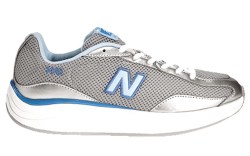 BOSTON — The toning category just got a bit more crowded.

“As a leader in the walking category for more than 25 years, our focus has always been about providing innovative footwear solutions that deliver performance, style and comfort,” New Balance President and CEO Rob DeMartini told Footwear News. “Our new products are pinnacle examples of how we are able to provide premium, technologically advanced footwear that meet a specific consumer desire and, in this case, deliver an end benefit for both men and women,” he said.

Wendy Yang, GM of wellness at New Balance, said the firm’s background in walking and comfort will be an advantage as it enters the category. “Comfort is in everything we do. It’s that first feel. You want your foot to feel as good at the end of the day as it does at the beginning,” she said.

The company is taking two different technological approaches to toning. Rock & Tone, which has an identifiable rocker bottom, is available for women as a sneaker ($85) or sandal ($55). The sneaker can be found at Lady Foot Locker, The Sports Authority, Dick’s Sporting Goods, New Balance stores and on Newbalance.com. According to Yang, the look of the collection is “sleeker” than similar models from other brands. “It’s very wearable, while also being very comfortable and delivering on all the benefits of muscle toning, calorie burning and slimming properties,” she said.

In the third quarter, Truebalance will debut two women’s styles: the 1100, retailing for $110, and the 850 for $90, both of which feature a different look and feel from Rock & Tone.

“Instead of giving you that front-to-back motion, [Truebalance] creates instability all the way around,” Yang said. A soft, flexible midsole with a spring system and a low-profile sole help wearers maintain a natural balance and use more muscle strength, she explained. According to New Balance’s tests, the shoes create a 29 percent increase in muscle activation and burn 10 percent more calories than regular sneakers.

Truebalance’s styling already has attracted high-end retailers Fred Segal Conveyor and Nordstrom, which will carry the 1100 starting in July.

Men’s looks in both collections will be available in the fourth quarter, Yang said.

Throughout the industry, toning has become the category du jour, with brands from Skechers, Reebok and MBT to Ryka, Dr. Scholl’s and Champion crowding the field. Analysts said the category could approach $2 billion in sales this year, but some are reserving judgment on whether toning will have full staying power.

“I give it 18 to 24 months, and then I’ll see where it is,” said Christopher Svezia of Susquehanna Financial Group. “Everybody recognizes that there could actually be something here. … The response is stronger than people initially anticipated.”

One of the reasons there has been such a strong positive reaction is because “a lot of major brands are looking at this category and getting into it,” Svezia said. New Balance, for example, “adds a lot more credibility than people really think,” he said.

Kate McShane, an analyst at Citigroup Global Markets, noted in a report last week that New Balance’s Rock & Tone shoe “may capture Skechers’ [market] share.” The shoe “may be most appealing to existing Skechers customers, as New Balance has historically trended older, and middle-aged women are core Skechers’ customers.”