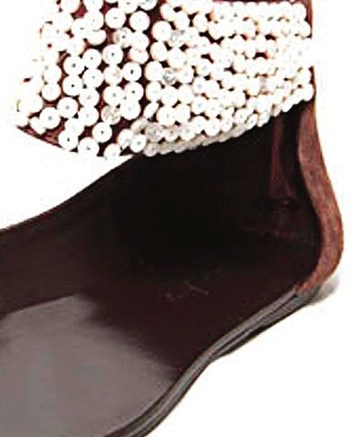 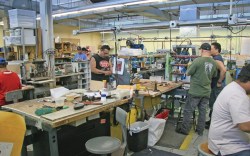 Steven Madden Ltd. has become quite the channel surfer.

With the recent addition of the high-end Elizabeth & James brand to its stable, the company is now firmly entrenched in every channel of retail distribution, from mass to salon.

“We capture that girl at every turn,” said Amelia Newton, EVP of wholesale and retail. “Working with such a wide spectrum of retailers allows us to get trend-right product to the consumer at every price point.”

Much of this diversity of distribution has come through licensing deals that, Newton said, have enabled the firm to fill different niches and reach demographics outside the core Steve Madden consumer base — for instance, value-driven shoppers.

“This was one of our biggest growth vehicles in 2009. [It] gave us the opportunity to reach the value and price-conscious customer who still wants fashion,” said Newton.

And since 2005, the firm has produced women’s and kids’ footwear under the Candie’s label, owned by Iconix Brand Group Inc. and sold exclusively at Kohl’s. According to Newton, the Madden team works closely with the retailer to develop products geared specifically to the Kohl’s customer.

“To really understand her DNA, our team is constantly in the [Kohl’s] stores, watching to see who’s shopping there and what she’s buying,” she said.

Earlier this month, Steven Madden kicked off a similar exclusive partnership with JCPenney, this time with juniors’ shoes and bags for Mary-Kate and Ashley Olsen’s new Olsenboye line. The spring ’10 footwear offering include styles such as peep-toe ballet flats, canvas sneakers and thong sandals, retailing from $20 to $50 at 600 JCPenney locations.

At the opposite end of the spectrum, the company also is teaming with the Olsen sisters on the footwear component of their contemporary Elizabeth & James brand. The $200-to-$500 line has enabled Madden to break into the luxury space — a coveted corner of the market that has long eluded the firm.

“It’s exciting to say we’re in the salon market,” Newton said. “It’s shown the industry we can do more than just juniors’ shoes; it has taken us out of that box. We’re capable of doing product in any grid at any price point. We just never had the chance to prove it until now.”

Already, the Elizabeth & James collection, which logged an impressive $1.9 million in sales in the third quarter, has helped open up new wholesale opportunities for the firm.

Todd Hanshaw, DMM at the Wynn Las Vegas, said Madden has a knack for identifying opportunities and going after them. “Steve has seen voids in the market, led many of the trends and taken advantage of both with his product. … He has worked with the [Olsen] twins to create something that has bridged the line between contemporary and designer in the shoe arena.”

For their part, the Olsens said the partnership has been a good fit. “[Steve’s] loyalty as a partner is invaluable,” said Ashley Olsen. Added Mary-Kate, “He is always supportive of our vision and direction, and it’s really impressive that he is open to providing creative opportunities to young artists and designers.”

Looking ahead, Madden is close to signing another highprofile celebrity deal, in partnership with a major retailer. While the company is busy tapping into new distribution channels, it continues to nurture its long-standing relationships with core retailers including Nordstrom, Macy’s, Dillard’s and Belk.

For example, to help give his retail partners some extra marketing muscle, Steve Madden does frequent personal appearances.

“Steve is really considered a celebrity. Girls will line up for him to sign their T-shirts,” said Newton. Making that personal connection with the customers is important, she added. “It reminds the girl that, yes, there is a man behind this. And for our retail partners, it helps drive sales and bring attention to the brand.”

While certainly a boon for business, straddling so many different distribution channels is a delicate balancing act, Newton explained.

If you’re visiting the Steven Madden Ltd. headquarters in Long Island City, N.Y., don’t be surprised to find Madden himself polishing a heel at the in-house factory.

The space, which once served as the company’s main production hub, now is used to create samples. Anywhere from one to 10 shoes are produced there daily, and then samples are sent abroad for mass manufacturing.

“The best part of having this facility is the hands-on piece,” said Rachelle Watts, VP of design. “Everybody who works here, they’re all about that. They have to be able to roll up their sleeves and spray a shoe or get on the tables and help assemble the uppers.”

The process starts with the concept and patternmakers, then goes to the initial sketches, where the materials are selected and the specs are started. The insoles and bottoms are then completed, including shape, color and stain. The first prototype is then fitted, and if necessary, corrections are made.

Sometimes shoes are even built on accident, such as when Madden placed a wedge below an upper he saw sitting in the factory and a new style was born. “We would never have considered that for construction,” Watts said.

The location also serves as a repair shop, so instead of having to send out a shoe, the company can alter and adjust it on location.

“What’s great is when there’s a void in the shoe line, and I or my team can make those samples [at the factory]. It makes such a world of difference,” said Daianara Grullon, VP of product development. “It ends up being the shoe we sell the most of.”

Operating under the “one shoe at a time” mentality — the phrase was once spray painted on the wall by Madden after a long night of production — the factory continues to improve technology and technique, ultimately providing the benefit of a very hands-on feel.