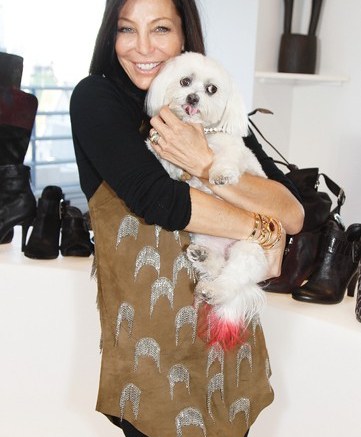 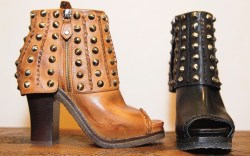 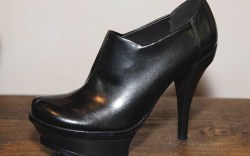 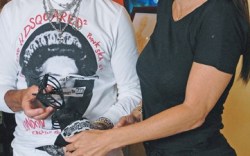 When she bought her first pair of Donald J Pliner shoes back in the mid-1990s, Lisa Pliner had no idea she was stepping into her future.

A few years later, Lisa met the designer on a blind date set up by a mutual friend, and after a six-month courtship, the two married in 1997. Lisa quickly became Donald’s muse and sounding board.

“I observed and absorbed,” said Lisa about her new role. “I was thrown into a world I knew nothing about. From day one, I would go with Donald to all the factories [to learn]. And he would always ask for my opinion on his designs.”

Although Lisa was just getting her feet wet in the shoe industry, she already had a strong eye for fashion. “I was born with an artistic trait,” she said, citing her clothing designer mother as a major influence. Lisa studied art and graphic design in college, even spending a semester painting in Italy. Putting her design savvy to work, she pushed her husband to step out of his comfort zone and expand on his popular collection of stretch looks. “He needed to have sexier shoes,” she said. “That’s how he started branching out and becoming who he is. I brought it out [in him]. I am his muse and vice versa. We work really well together.”

In addition to starring in Donald J Pliner ads with her husband, Lisa frequently joins Donald for in-store personal appearances. “Customers get really excited to see us together,” she said. “Everyone knows me as a face of the brand and the wife of Donald.”

And now, consumers are getting a chance to know Lisa in a different way. Believing in his wife’s talent and looking to give her an outlet for creative ideas, Donald encouraged Lisa to design a footwear line of her own. The high-end, made-in-Italy Lisa F Pliner line bowed in 2009, but Lisa was forced to return to the drawing board after a tepid response from retailers during the stalling economy. This fall, after some fine-tuning and a production shift to China to bring down prices, the re-imagined Lisa for Donald J Pliner collection will debut. “[Compared with Donald’s collections], it’s a little edgier, with a comfort twist,” said Lisa.

According to Donald, his wife’s collection is a prime opportunity to change the perception of the Donald J Pliner brand and bring in a younger, more fashion-forward audience. “A lot of people think of Donald Pliner as an older, [less progressive] line,” he said. “[The new collection] has a much different direction.”

Lisa said her line targets women on the go — like her — with directional styles such as platform heels and biker boots, retailing from $185 to $325. While Donald’s signature is stretch materials, Lisa’s trademark is incorporating sturdy lug bottoms on her ultra-high-heeled shoes for added traction.

Still, her husband’s influence is evident. “Lisa really developed the fashion. I just showed her how to blend the shoe’s styling with the fit, the footbeds and how to wear it right,” said Donald. “Her line is extreme [in terms of the aesthetic], but it has the comfort factor that she learned from me.”

For Lisa, it’s this collaborative spirit that she enjoys most about working with her husband. “We trade ideas for our lines,” she said. “We know each other’s style and how it works for us.”