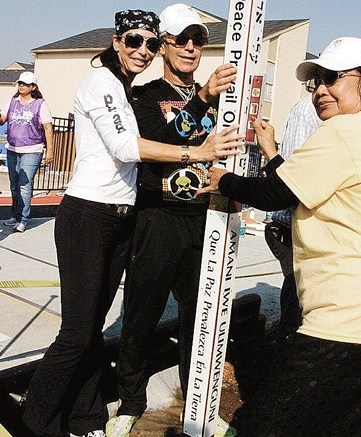 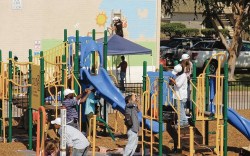 Before the Houston Children’s Playground was built last year, many of the Bhutan refugees in the inner-city neighborhood weren’t used to traffic — let alone allowing their children to play near it.

The city’s Los Arcos Apartments, home to many low-income families from the Asian country, offered no safe recreation area. Enter Donald and Lisa Pliner, whose funding allowed a playground to take the place of a parking lot last September, with the help of nonprofit group KaBoom, which has coordinated more than 1,700 such projects nationwide.

“What was so neat about the [Houston] project was that most of the people there had no idea that Donald is this amazing designer,” said Lisa Attman Palmer, who works in corporate development at KaBoom and partners with the Pliners on their projects.

The Pliners dedicated themselves to children’s causes after adopting their daughter, Starr, from a Kazakhstan orphanage five years ago. They created their own foundation, Peace for the Children, in 2007 to raise money for children’s causes. So far, the couple has focused their efforts on playgrounds.

“People say, ‘Why a playground?’” said Donald Pliner. “The fact is some children don’t know what a playground is. A child can be a child just once in their life. If we can [help] the children play, that is so important.”

Now, the brand sells special Shop for Peace T-shirts, shoes and jewelry for the cause, and a portion of all Donald J Pliner sales go to the foundation. And when Pliner makes personal appearances in his own stores, a percentage of sales from that particular day also go to the charity.

The foundation has funded two playgrounds: the site in Houston and the Miami Children’s Museum Playground. With KaBoom’s help, kids design their dream sites and volunteers work for a day to make them a reality. (The land is donated, but the project has cost about $125,000 in Houston and $150,000 in Miami.)

The foundation has set its sights on Kansas City, Mo., as a potential spot for the next playground. Other cities being eyed include Seattle, Las Vegas and Chicago, where Pliner was raised.