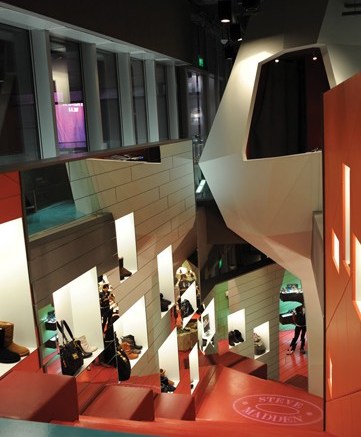 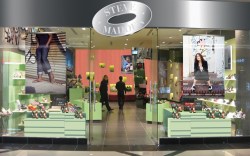 While Steve Madden’s international push began only just five years ago, the company has made overseas expansion a front burner initiative.

John Madden, managing director of Steve Madden International (and elder brother to the namesake), said the firm didn’t look outside the U.S. until 2005, then opened business to Canada via a distributor. Now, the Madden brand is sold in 46 countries, with 81 freestanding stores and 64 shop-in-shops. By the end of 2011, the company could have as many as 123 freestanding units and 100 in-store kiosks.

International sales currently make up roughly 10 percent of business, but Madden said that could grow to 20 percent to 30 percent by 2015. The brand is distributed in Canada, Mexico, Latin America, the U.K., Greece, Israel, Turkey, the United Arab Emirates, the Pacific Rim, Australia and South Africa. Next up is Russia, the Ukraine and Eastern Europe.

Key to the company’s international plan is finding experienced distributors who know the shoe business, have worked with other brands and can commit to opening Madden branded retail outlets.

“Our strategy is to look for the strongest possible local distributors who have the ability to open retail stores,” said Madden. “They can have a wholesale business also at the same time, but the retail stores are key. If you can get the right distributor, then it works.”

That’s a process that has gotten easier as the brand’s popularity has grown in recent years. Now, Madden said, would-be distributors approach the company, and he and his team can evaluate which is the best partner. “We don’t have to go and beg anymore,” Madden said. “They come to us now. It’s gotten pretty easy.”

However, the firm still conducts an extensive review process prior to signing a new distributor.

With Russia, for instance, Madden said he was approached by numerous companies, but he sent over a staff member to do a first-hand appraisal of the companies. “To find out which one we wanted to work with, somebody went to visit Kiev, Moscow and St. Petersburg to look at the [retail] locations, meet the people and find out which [company] was the most retail oriented and how financially stable they were. Then, we’re going to sign one of them sometime in the next month or so.”

Madden added that the international foray has proven that the brand’s trend-right approach can span country and cultural boundaries. He said the company’s top 10 best-selling styles tend to be identical all around the world.

That’s no surprise to B. Riley & Co. senior analyst Jeff Van Sinderen, who said the factors that made Madden a success domestically are just as appealing to international consumers. “When [Steve] Madden and his team design a great shoe, it tends to be universally appealing. It works here in the U.S., from coast to coast,” he said. “It’s great product. The fashion content is there. It’s a great value proposition, and they all have Steve Madden’s twist. He makes them unique.” Steve Madden launched in Europe 18 months ago and now has more than 250 wholesale accounts there and two Madden branded stores in London, both of which opened at the end of 2009.

“We’ve done incredibly well, and we’ve found Germany and the U.K. to be the most receptive to the fast-fashion, celebrity-endorsed package we offer. Even in secondary and tertiary towns in Germany, for example, women all know the celebrities associated with Steve Madden,” said Steve Price-Brown, head of Steve Madden Europe, operated by London-based European licensee and distributor OPS Ltd.

What does vary from country to country is the look of each retail location. Madden said he provides distributors with several different store design options and allows them to select and tweak the designs to their specific needs. “We don’t standardize it and say you must use this particular design,” he said. “That’s the same here [in the U.S.]. We have different stores in Los Angeles than we do in New York, and different stores in Florida. In malls, you’ll see three or four different designs.”

Several regions of the world, however, remain elusive to the company. In Brazil and India, Madden said, local shoe brands dominate the market, and protectionist measures by the governments to impose heavy duties on imported shoes have made it challenging to formulate workable business models. “They can make it so difficult for you to import shoes from China that the shoes, which would normally cost $69 retail, go up to about $150 in their currencies through duties and taxes,” he said.

Regardless, expectations are high for the company’s international unit, given the success it has already achieved. “We just went into China two years ago, and this year, we’re forecasting $30 million to $40 million in retail [sales],” said Madden. “That’s pretty quick and shows that the shoes sell.”